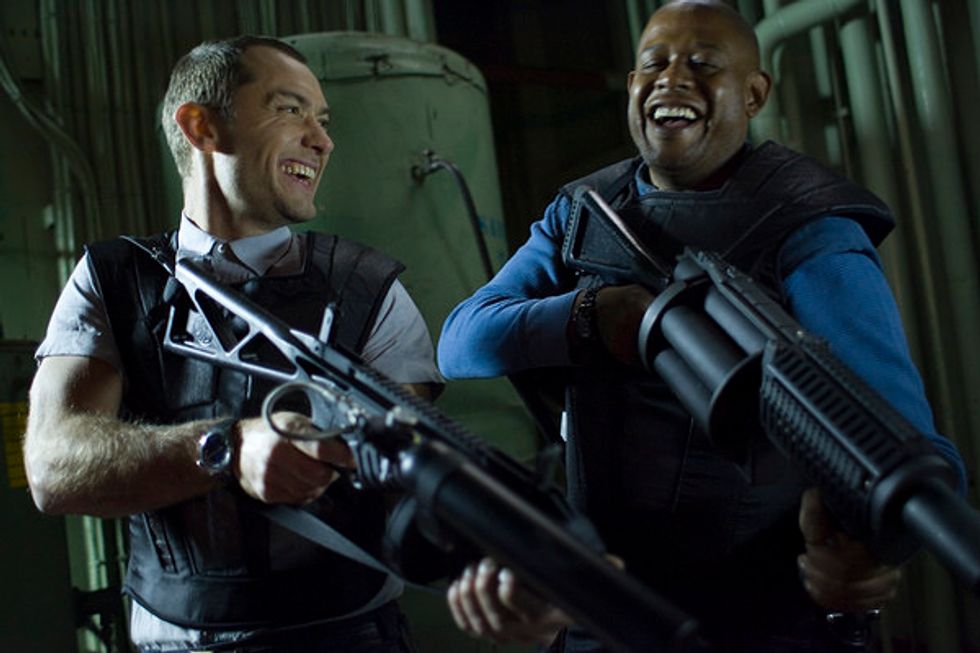 Miguel Sapochnik’s love letter to American health care and the subprime lenders who felled the country’s economy takes us 20 years into a bleak, bloody future where artificial organs are sold at a premium ($600,000 for a synthetic heart) and reclaimed by knife-wielding thugs once clients default on their payments.

Remy (Jude Law) is one of those thugs, coldly carving up the hopeless saps whose bodies are essentially on loan from his employer, the Union Corporation. He is unmoved by the grislier aspects of his work, perhaps because he buys so readily into the company credo. “You’re not taking a life,” his boss (a smugly soulless Liev Schreiber) explains. “You’re keeping the Union viable so we can continue to give it.”

His increasingly estranged wife (Carice van Houten, of Valkyrie) isn’t convinced, and Remy, despite an alarming penchant for violence, wants out. It stands to reason, then, that his last job should be the most problematic: Asked to snuff a famous record producer (RZA) with a Union ticker, he is laid low by a faulty defibrillator, leaving him in the uncomfortably ironic position of accepting his own fake heart. Naturally, he can’t afford it.

It’s not hard to anticipate the about-face that awaits Remy, coupled with his dim realization that “a job’s not just a job – it’s who you are.” His quest to redress the Union’s seizures lands Repo Men, adapted from Eric Garcia’s 2009 novel The Repossession Mambo, back on the beaten path, as our newly purposeful hero slices and dices his way to company headquarters, where he plans to blow up the mainframe.

What distinguishes the movie from more conventional thrillers is not Law’s Herculean handiwork, but Garcia’s wicked sense of humor, conveyed most effectively by the performances of Schreiber and Forest Whitaker, on hand as Remy’s brutish best friend. The glee with which they embrace their indecency is grotesque enough to mitigate the bloodletting, and far more entertaining.

Also commendable is Repo Men’s bitterly satirical skewering of a system weighed in favor of corporate sociopaths preying on the desperate. It is a movie with brains to complement its brawn, plus a surprisingly cheerless denouement that leaves us no hope for a brighter tomorrow. If only Sapochnik and Garcia, who adapted the screenplay with House M.D. writer Garrett Lerner, had stuck more to their ideas than their guns, they’d really have something.


EXTRAS: Although Universal has been criticized in some corners for failing to market the movie more aggressively back in March – all I knew then was that Men was not a belated sequel to Alex Cox's 1984 classic Repo Man – give the studio credit for packing on the bonus footage, including Sapochnik, Garcia and Lerner's commentary tracks, a revealing series of deleted scenes, and an unrated cut eight minutes longer than the theatrical version.

The Losers are played here by Jeffrey Dean Morgan, Chris Evans, Idris Elba, Columbus Short and Oscar Jaenada, black-ops specialists assigned to a fatal mission and ultimately framed in the murders of 25 children. Stranded in South America and desperate to take back their lives, they seek revenge on the smarmy warmonger (Jason Patric) who sent them to die.

Director Sylvain White (Stomp the Yard) is clearly in love with slow-motion shots of his heroes sauntering into battle, following them with sped-up cuts of the actual combat. The effect is disorienting: It takes us out of the scene before it’s even begun. Butthese Losers are rarely boring, keeping us modestly diverted until their inevitable showdown with Patric, who's never been funnier.

As big, dumb popcorn movies go, this one's saturated in enough adrenaline to tide us over until this fall's DVD release of the equally disposable but more compelling A-Team. Those in search of a probing plot or rich characterizations need not apply. EXTRAS include featurettes about the making of the popular Losers comic books and the cast's intensive training sessions with ex-Navy SEAL Harry Humphries.

Former Saturday Night Live player Tracy Morgan has by now trademarked the dizzy persona that has served him well on the NBC ensemble comedy 30 Rock and here, in Kevin Smith’s weightless new farce, as a New York cop hunting a vicious gang leader and a stolen baseball card. He is self-absorbed, endearingly eccentric and rarely at a loss for words, especially when logic escapes him. He’s never all there.

The character is a more or less sanitized approximation of the brazen goofball Morgan plays in his stand-up act, and as one half of the buddy duo in Cop Out – Bruce Willis plays his straight-man partner with a knowing wink – he proves his charisma is no fluke. Absent 30 Rock creator Tina Fey, his star still shines.

In other words, Morgan has the talent to transcend his TV roots, but he’s going to need a sturdier vehicle than Cop Out to do it. Smith, who rarely directs scripts he doesn’t write himself, makes an exception here, and the results are depressingly meager. Seventeen years after Clerks made an unexpected splash at the Cannes Film Festival, Smith’s greatest strength remains his gift for playfully profane wordplay. His productions are rarely elegant, but usually effective. Cop Out is neither.


EXTRAS in the "Rock Out with Your Glock Out" special edition include over an hour of hit-or-miss outtakes and a generous helping of Smith, whose insights and anecdotes are consistently funnier than the movie itself.