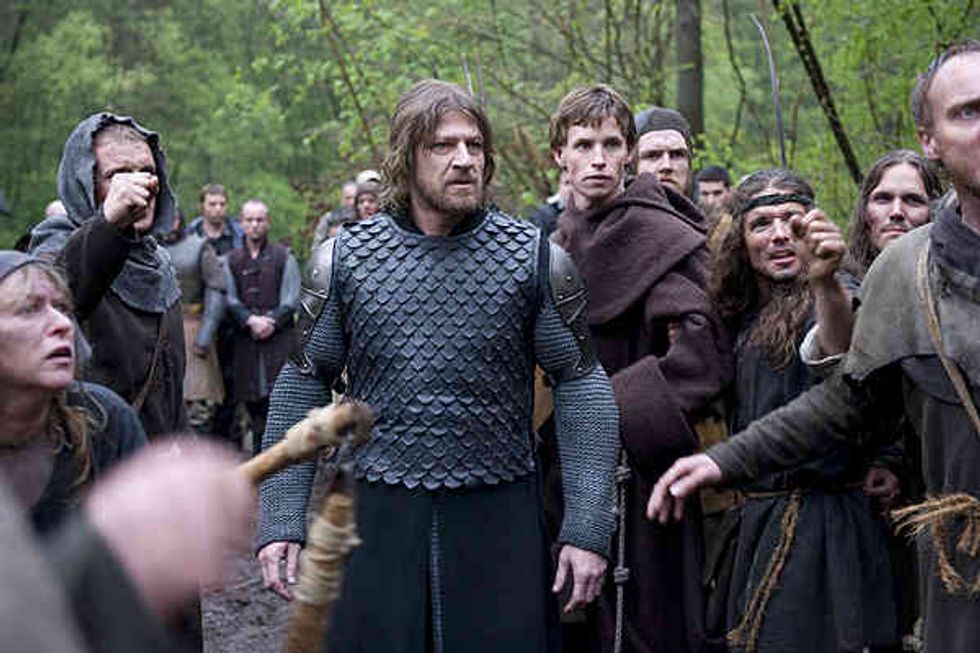 About as sunny as it sounds, Christopher Smith's grim fairy tale Black Deathfinds a 14th-century knight (Sean Bean, of HBO's Game of Thrones) and his band of mirthless mercenaries traveling the European countryside in search of a rumored necromancer. Reluctantly joining them for the journey is Osmund, a young monk played by The Other Boleyn Girl's Eddie Redmayne, who finds their violent brand of piety less than Christian. Surrounded by the devastation wrought by the onset of the bubonic plague, in a world seemingly forsaken by God, will Osmund allow himself to be seduced by pagans – led by Carice von Houten's alluring high priestess – whose village remains curiously unaffected by pestilence? Death sides with neither Bean's hard-hearted missionaries nor the heathens who welcome them into their disease-free community. Here, in a slowly unfolding melodrama that's cold but strangely engaging, humanity is depicted as a scourge no less insidious than the plague itself. The EXTRAS are industry standard: deleted scenes and a making-of featurette in which cast and crew congratulate each other on a job well done.

Hall Pass
The latest nitwits-gone-wild comedy from Peter and Bobby Farrelly, Hall Passwrongfully assumes that we can tolerate Rick (Owen Wilson) and Fred (Saturday Night Live’s Jason Sudeikis), incompetent husbands whose desire to stray leads them to seek a weeklong furlough from fidelity. Their reach far exceeds their grasp. Rick is merely a bumbling goof with a wandering eye, but Fred, a wannabe cheater who’s too hopeless to close the deal, lacks redemptive charm. Wilson and Sudeikis share a natural chemistry; their exchanges, particularly with Stephen Merchant (BBC’s The Office), can be playful and funny. But here they are trapped in a story so desperate for cheap laughs that the movie’s most uncomfortable sequence, involving a projectile bowel movement, seems sadly appropriate. The EXTRAS – a gag reel, plus a mildly amusing outtake featuring the great Richard Jenkins – seem skimpy.

Vanishing on 7th Street
Having plumbed the surreal depths of an insomniac’s paranoia in The Machinist (2003) and thrust an unsuspecting couple into a snow-swept Hitchcockian nightmare in Transsiberian (2008), Brad Anderson takes to the streets of Detroit, with decidedly uneven results, in the existential thriller Vanishing on 7th Street. Once again, Anderson toys with his audience, crafting a suffocating air of menace around the few survivors of a mysterious apocalyptic occurrence – among them, Hayden Christensen and Thandie Newton. Yet for a movie so seductively eerie in the early going, 7th Street hits a dead end; it’s all setup and no payoff. Darkness falls, cloaking the city in shadows that swallow all but a few random stragglers. But why? Nobody knows, certainly not Anderson or screenwriter Anthony Jaswinski, whose meandering narrative ultimately leaves us wanting the lights back on, for all the wrong reasons. EXTRAS include an alternate ending that's only slightly different from the theatrical cut, commentary by Anderson and three behind-the-scenes featurettes.

Sucker Punch
Punch, which Watchmen's Zack Snyder, working for the first time off his own screenplay, co-authored with newcomer Steve Shibuya, seems more interested in providing an experience than a fully functional narrative. Lacking in this hyperthyroid adventure, involving five girls imprisoned and abused in a Vermont mental ward, is a satisfying account of their actual trials. What the movie strives to capture, more than the grisly details of their suffering, is the emotional thrust of their experience – the pain, the desperation, the desire to be free. Its video-game structure and painstakingly crafted effects lend themselves more to dazzling spectacle than dramatic interpretation, but the story is not without soul. EXTRAS: Snyder doesn't shortchange fans of his critically reviled epic, serving up more than two hours of behind-the-scenes footage, picture-in-picture commentary and animated shorts that provide an added measure of depth to the proceedings.

Unknown
Jaume Collet-Serra's thriller, about an amnesiac (Liam Neeson) struggling to reclaim his identity, owes a considerable debt to Hitchcock’s North by Northwest. The biggest difference: Hitchcock understood that half the fun was allowing Cary Grant’s overmatched everyman to turn the tables on his enemies by methodically unraveling their implausible schemes. Here, screenwriters Oliver Butcher and Stephen Cornwell seem less interested in their befuddled hero's frantic search for clues than in blowing the bad guys to smithereens. Imagine how much richer Unknown might have been if the filmmakers had spent more time getting to know their characters, or had shared Hitchcock’s wry sense of mischief. Instead, they treat a promising setup as just another trigger for Hollywood violence. Of the movie’s many surprises, the most jarring is the least calculated – how pedestrian it all seems in the end. EXTRAS include a brief chronicle of Neeson's middle-aged rise to action-hero supremacy.