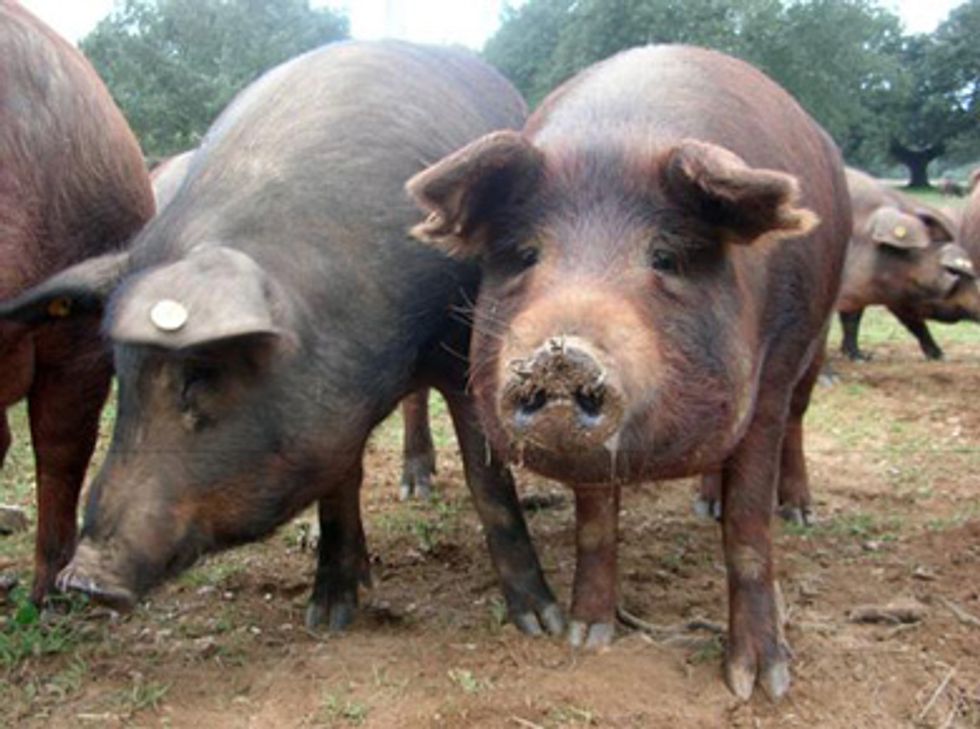 Aged, nutty and delightfully funky in flavor, the highly seasonal meat from Iberico pig meat bears little resemblance to the pork and bacon we all grew up eating. I dug into the last of Lafitte's early stash of Iberico pork shoulder meat on Friday and, let me tell you, it's anything but the other white meat. Don't worry. There's more to come.

Iberico just made its San Francisco debut last year when chef Russell Jackson prodded Golden Gate Meats to get him a stash for the menu at Lafitte. Now this year, our local meat purveyor is working with Washington DC-based Bellota Importers again to get a slightly larger share of the 4,000 or so pigs slaughtered annually on the world's lone Iberico farm, Fermin in La Alberca, Spain. The burly, black animals yield a highly-prized commodity, along the lines of caviar, Kobe beef and champagne. Since Lafitte broke the seal last year, there are now several places around town to sample Iberico as this year's spring bleeds into summer. To further explain just how "now" and hot this is, Iberico just appeared in the first Williams-Sonoma catalog last week.

Masa's will be offering a six-course tasting menu featuring Iberico through the 28th of this month. Teaser: it starts with shaved Iberico ham on broiche and finishes up with Iberico ham ice cream alongside a housemade strawberry pop tart. Lafitte is serving slivers from its limited stash of Iberico lardo to diners at one of the six VIP chef's seats (affectionately dubbed "the plank"). And Golden Gate expects to get this year's shipment of Iberico in the early part of June. It'll pop up in larger quantites at Lafitte, Masa's and Incanto soon thereafter.  Jackson will be kicking off next month's Iberico barrage with a pork and pig tasting menu on Father's Day. Although you may see everything from tenderloin and bone-in rack to tocino (back fat), boneless shoulder steak, ribs and cheeks on the menu, all the meat cuts are handled with care. "I never put this meat on the slicer," says Jackson. "I slice everything by hand with my knife. This is special.