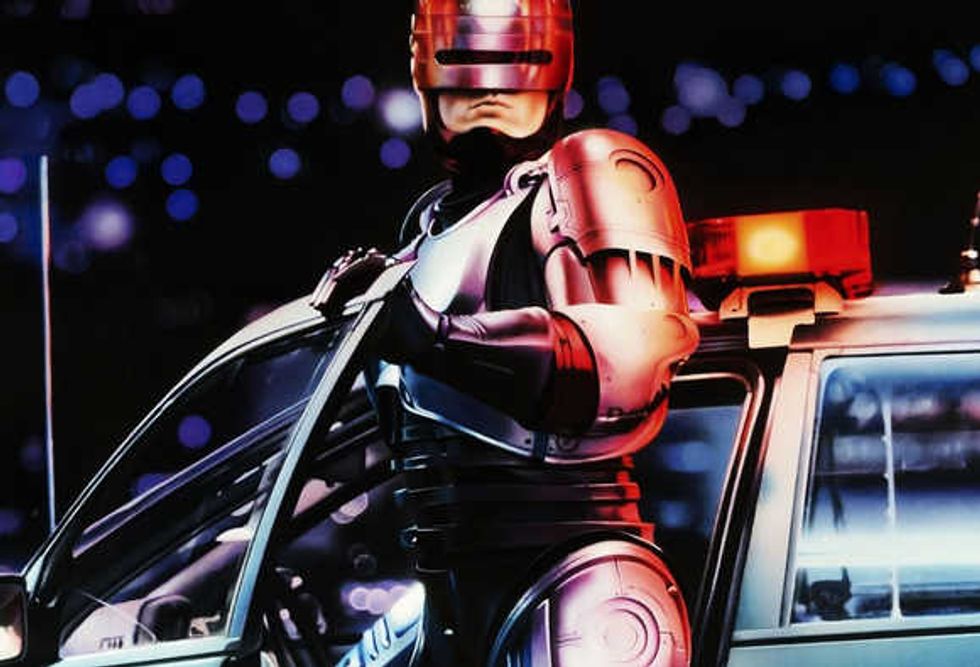 The fifth San Francisco International Animation Festival kicks off tonight at the Embarcadero with Here Comes the Waves: The Hazards of Love Visualized, a colorfully eccentric interpretation (by four different artists) of the acclaimed 2009 album by indie-rock stalwarts The Decemberists. The festivities wind to a close Sunday with Gravity Was Everywhere Back Then, Brent Green's moving tribute to a Kentucky hardware-store clerk who, during the 1970s, built a crazy-quilt house to cure his wife's cancer. Elsewhere:

1. RoboCop
Where:Castro Theatre, 429 Castro St., 415-621-6120
When: Nov. 13
Why: Nearly a quarter-century after its 1987 release, Paul Verhoeven's dystopian sci-fi classic remains ahead of its time, a thrilling, laughably cynical snapshot of a future in which corporate greed and class warfare rule the day. With Darren Aronofsky's rumored reboot sidelined by insufficient financing, don't miss this opportunity to check out the brilliant original, handsomely restored with a new 35-millimeter print and playing as part of Midnites for Maniacs marathon featuring Westworld, The Terminator and the animated Transformers.

2. 127 Hours
Where: Embarcadero Center Cinema, 1 Embarcadero Ctr., 415-352-0835; Sundance Kabuki Cinemas, 1881 Post St., 415-929-4650
When: All Week
Why: In 2003, a boulder pinned mountain climber Aron Ralston to the wall of Utah's Blue John Canyon for nearly five days, forcing him to amputate his right arm in a desperate bid to survive. In adapting his bestselling 2004 memoir to the screen, Slumdog Millionaire'sDanny Boyle deftly navigates the obvious stumbling blocks, transforming a mostly one-man show with a well-publicized conclusion into arresting, often transcendent drama that speaks not only to Ralston's will but also to the durability of the human spirit.

3. Four Lions
Where: Lumiere Theatre, 1572 California St., 415-885-3201
When: All Week
Why: It sounds like an invitation for righteous outrage – an unflinching comedy about suicide bombers determined to strike a blow for Islam but too dim to settle on a plan. Incredibly, first-time feature director Christopher Morris, who co-wrote Four Lions with Sam Bain (BBC’s Peep Show) and In the Loop screenwriters Jesse Armstrong and Simon Blackwell, pulls it off, with a hilariously biting satire that turns unexpectedly poignant when his terrorist wannabes stumble into the final phase of their half-baked operation.

4. Fair Game
Where: Embarcadero Center Cinema, 1 Embarcadero Ctr., 415-352-0835; Sundance Kabuki Cinemas, 1881 Post St., 415-929-4650
When: All Week
Why: Doug Liman (The Bourne Identity) treats Valerie Plame’s saga more as a harrowing personal odyssey than as a case of no-holds-barred partisan politics in his riveting new thriller, starring Naomi Watts as the ex-CIA officer whose cover with the agency was blown as the result of a White House leak. Jez and John-Henry Butterworth's screenplay stops short of implicating former Vice President Dick Cheney, whose personal chief of staff was ultimately identified as the source of the leak, but Fair Game's resistance to finger-pointing never dulls its considerable impact.

5. The Other Guys
Where: Red Vic Movie House, 1727 Haight St., 415-668-3994
When: Nov. 12-13
Why: Never mind the barely functional story that provides a flimsy backdrop for Will Ferrell’s improvised riffs and Mark Wahlberg’s empty-headed rants. The latest collaboration from Ferrell and longtime collaborator Adam McKay (Anchorman) acknowledges all the conventions of a police procedural, only to deflate them with deadpan precision. The movie’s pace is sporadically sluggish, but the jokes frequently pay off, most consistently when they take the genre’s best-known clichés and stand them on their head.

6. Monsters
Where: Lumiere Theatre, 1572 California St., 415-885-3201
When: All Week
Why: To make a $15,000 movie about monsters, first-time feature director Gareth Edwards had to keep his monsters scarce. No matter: Save for a strained social metaphor introduced in the movie's waning moments, his post-invasion fantasy, set six years after giant, squid-like aliens have occupied Central America, is tense, engaging and thought-provoking.

7. The Girl Who Kicked the Hornet's Nest
Where: Clay Theatre, 2261 Fillmore St., 415-346-1124
When: All Week
Why: The final installment of Stieg Larsson's Millennium trilogy finds Lisbeth Salander (Noomi Rapace) once again suffering at the hands of her countless male oppressors, languishing first in a hospital and later in jail. Hornet's Nest stays true to the formula of its predecessors – the icy cyberpunk gets her revenge, with timely assists from ace investigative journalist Mikael Blomkvist (Michael Nyqvist) – and efficiently ties together the thrilling saga's loose ends.