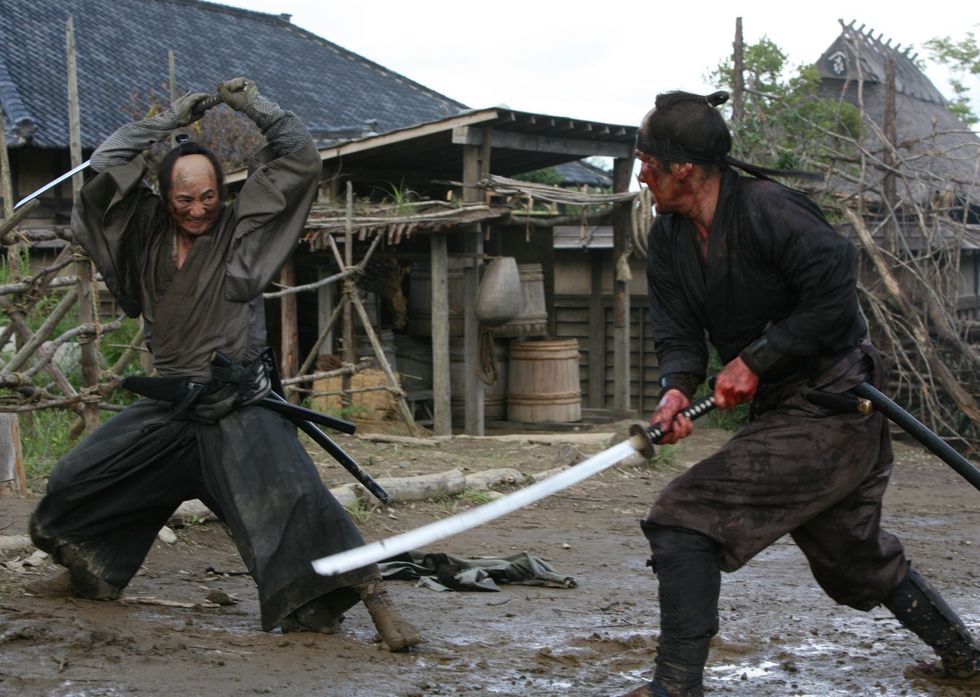 With IndieFest's Another Hole in the Head Festival continuing through Friday at the Roxie and Frameline35 arriving at the Castro this Thursday,Bay Area moviegoers should have little trouble satisfying their appetites for something slightly more cutting-edge than, say, the upcoming Mr. Popper's Penguins. And if you'd rather steer clear of the festival crowds? No problem. Check out any of the following titles now playing at an indie theater near you.

1. 13 Assassins
Where:Bridge Theatre, 3010 Geary Blvd., 415-751-3213
When: All Week
Why: Takashi Miike's story of 13 samurai-for-hire assembled to murder a sadistic young lord is invigorated by the irrepressible charisma of star Koji Yakusho (Babel) and the director's hypnotic, unrelenting pacing. Yet Assassins is most unforgettable for the sheer audacity of Miike's vision: The film, which recalls Kurosawa at his most grandiose, is a dazzling spectacle, highlighted by a climactic 45-minute showdown that somehow leaves us panting for more.

2. Beginners
Where: Embarcadero Center Cinema, 1 Embarcadero Ctr., 415-352-0835
When: All Week
Why: A sweetly humorous, semi-autobiographical drama from writer-director Mike Mills – the Thumbsucker creator, not the R.E.M. bassist – Beginners is the story of a young man's struggle to accept a past he cannot change, a present that seems at once surreal and tragic, and his own fear of love. Trite as that may sound, this is a beautiful work, not just for the emotions it deftly reveals, but also for its skillful use of still photography to evoke moods and memories.

3. Midnight in Paris
Where: Embarcadero Center Cinema, 1 Embarcadero Ctr., 415-352-0835
When: All Week
Why: Woody Allen's latest romantic comedy, his most engaging since 1996's Everyone Says I Love You, follows a soon-to-be-married couple (Owen Wilson, Rachel McAdams) whose misadventures in the City of Love will forever change their perspectives on life and romance. As much a lighthearted farce as a cautionary tale about those whose nostalgic whims blind them to the beauty of the present, Paris may seem a minor entry in Allen's oeuvre, but that takes nothing away from its considerable charms.

4. Repulsion
Where: Castro Theatre, 429 Castro St., 415-621-6120
When: June 15
Why: Catherine Deneuve (Dancer in the Dark) plays Carole, an emotionally distant beauty coming unhinged in her London flat in Roman Polanski’s chilling 1965 depiction of raging psychosis. Left alone by her vacationing sister, Carole is haunted by spirits real and imagined, her insanity steadily escalating to a hysterical pitch. The result is a vivid plunge to the depths of a fractured psyche, and one of Polanski's most memorably disquieting achievements.

5. The Tree of Life
Where: Embarcadero Center Cinema, 1 Embarcadero Ctr., 415-352-0835
When: All Week
Why: Winner of the Palme d'Or at this year's Cannes Film Festival, Terrence Malick's Life traces the spiritual journey of a disillusioned son (played as a restless adult by Sean Penn) struggling to reconcile a troubled relationship with his father (Brad Pitt). In trying to arrive at some deeper understanding of the existential, the director's visual poetry is striking, his narrative as insightful (at times) as it is frustratingly oblique.

6. Bill Cunningham New York
Where: Opera Plaza Cinema, 601 Van Ness Ave., 415-771-0183
When: All Week
Why: “We all get dressed for Bill,” says Vogue editor-in-chief Anna Wintour, paying the ultimate compliment to legendary fashion photographer Bill Cunningham, whose work has been featured in the New York Times for 33 years. But who is Cunningham, the octogenarian-about-town relentlessly searching for the perfect shot? Bill Cunningham New Yorkleaves us with as many questions about Cunningham as answers. That we bother to ask them at all is a tribute to the film’s effectiveness.

7. Insidious
Where: Red Vic Movie House, 1727 Haight St., 415-668-3994
When: June 16-17
Why:Saw creators James Wan and Leigh Wannell return with the surreal astral-projection thriller Wan describes as "this generation's Poltergeist." Is it? Not quite. We can see Wannell's endgame from a distance, defusing some of the tension he earns early on with old-fashioned, bloodless scares. But while the duo's return to low-budget horror looks the part – Wan's set pieces are lovingly stylized but clearly made on the cheap – the spirit of creativity that permeates Insidious is enough to prove their Saw success was no fluke.