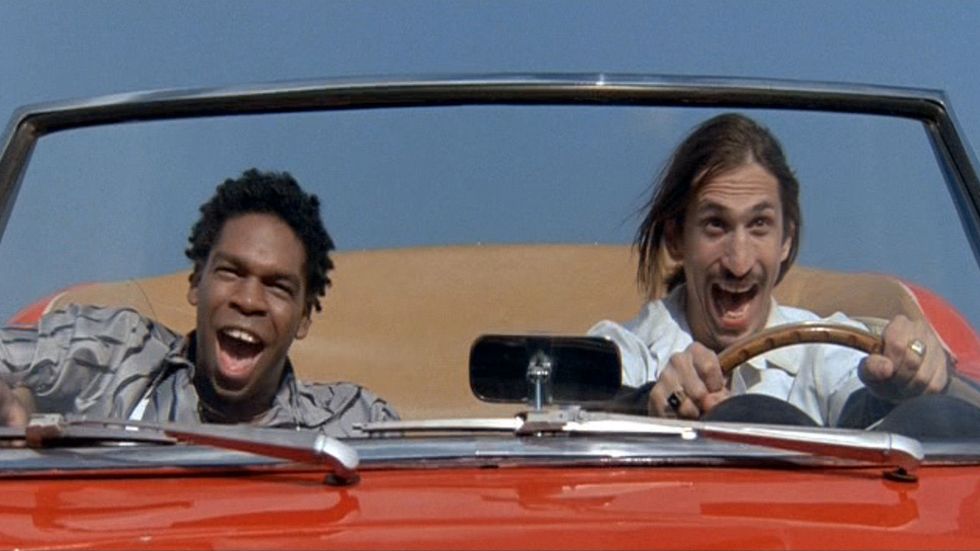 Hungry for something new? Head to the Roxie this weekend for San Francisco's annual International Festival of Short Films,featuring dozens of cutting-edge documentaries, music videos and animations representing 20 countries. Otherwise, check yourself into the Castro for a week of bona-fide American classics, including:

1. Ferris Bueller's Day Off
Where:Castro Theatre, 429 Castro St., 415-621-6120
When: Sept. 9
Why: Remember when Matthew Broderick was the epitome of cool? No? Then travel back to 1986, when John Hughes unleashed master slacker Ferris Bueller onto downtown Chicago for an afternoon of rebellious wish fulfillment, in one of the late director's funniest and most endearingly whimsical comedies.

2. Taxi Driver
Where:Castro Theatre, 429 Castro St., 415-621-6120
When: Sept. 15
Why: Another classic that requires no explanation of its greatness, Martin Scorsese's nightmarish vision of fear and loathing in New York during the post-Vietnam '70s arrives at the Roxie with a striking new 35-milimeter print. Come witness Robert De Niro at the peak of his powers, if only to erase the bitter aftertaste of another Fockers disgrace.

3. Raiders of the Lost Ark
Where:Castro Theatre, 429 Castro St., 415-621-6120
When: Sept. 11
Why: Long before Steven Spielberg and George Lucas sullied his memory by sending him to the Kingdom of the Crystal Skull, Indiana Jones (Harrison Ford, duh) first cemented his reputation for death-defying heroism in Raiders, a pulp masterpiece in which the world's most fabled archaeologist wages a one-man war against Nazis, venomous snakes and a small army of tribal warriors during his quest to recover the Lost Ark of the Covenant.

4. Higher Ground
Where: Opera Plaza Cinema, 601 Van Ness Ave., 415-771-0183
When: All Week
Why: Adapted from screenwriter Carolyn Briggs' 2002 memoir This Dark World, Vera Farmiga's directorial debut is uncompromising. The story of a Christian fundamentalist undergoing a personal awakening that threatens her marriage and complicates her relationship with God, Ground is neither condescending nor sensationalized, a keenly observed portrait of a life mired in uncertainty and disillusionment.

5.The Man Who Fell to Earth
Where: Lumiere Theatre, 1572 California St., 415-885-3201
When: All Week
Why: Space oddity David Bowie travels to earth from a drought-stricken planet, seeking sustenance for his ailing alien civilization. His otherworldly grasp of technology makes him rich, thrusting him headlong into the culture of American decadence, symbolized here by booze, sex and TV. Bowie's big-screen debut, now celebrating its 35th anniversary, arrives at the Lumiere featuring 20 minutes of pristine footage cut from its original U.S. release.

6. The Hedgehog
Where: Bridge Theatre, 3010 Geary Blvd., 415-751-3213
When: All Week
Why: Inspired by Muriel Barbery's bestselling The Elegance of the Hedgehog, Mona Achache's feature debut tells the story of a young girl determined to end her life on her 12th birthday. When she discovers a secret library, and improbably befriends its curmudgeonly keeper, Paloma (Garance Le Guillermic, of I Hate My Best Friends' Kids) begins to understand that there are allies to be found beneath the prickliest of exteriors, making own coming of age a much less pessimistic prospect.

7. Senna
Where: Embarcadero Center Cinema, 1 Embarcadero Ctr., 415-352-0835
When: All Week
Why: Brazilian Formula One racer Ayrton Senna's remarkable story – charting his achievements on and off the track and the mythical status he has attained – is the subject of Asif Kapadia’s Senna, a Sundance winner that spans its subject’s years as an F1 driver, from his opening season in 1984 to his death a decade later. More than a film for F1 fanatics, the documentary recounts a remarkable story in boldly unconventional fashion, eschewing standard documentary technique for a more cinematic approach that makes dramatic use of previously unreleased F1 footage.