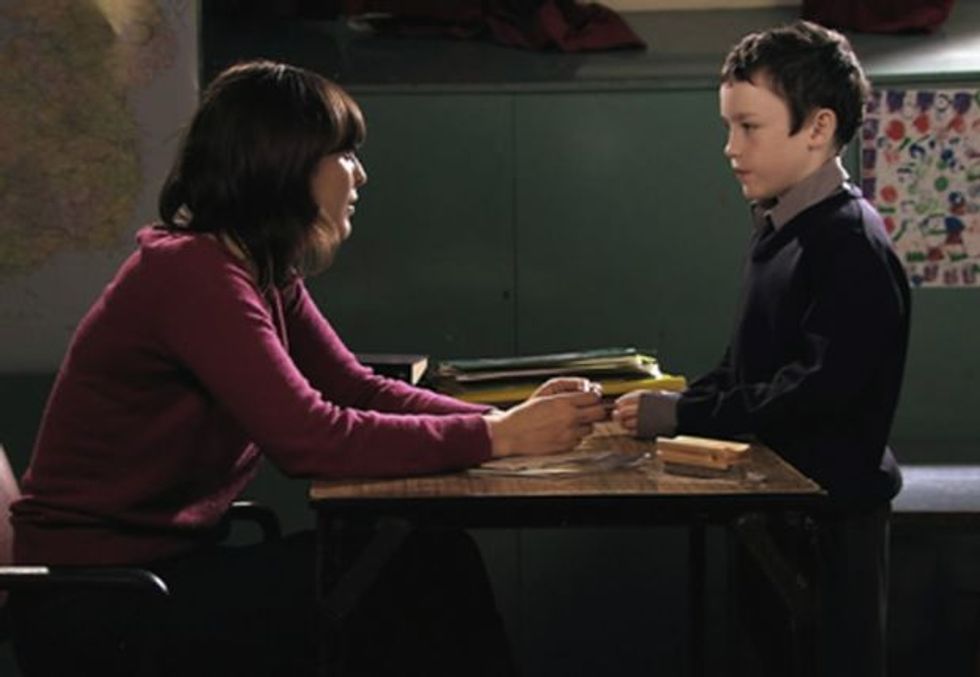 OK, one last time for the cheap seats. If you haven't seen this year's crop of Oscar heavyweights by now, the chances are good you never will. But if you want to shore up your rooting interests this Sunday night, or just to impress your friends at their awards party by reeling off useful facts about the nominees, get to an indie theater tonight.

1. Oscar-Nominated Shorts
Where: Lumiere Theatre, 1572 California St., 415-885-3201; Opera Plaza Cinema, 601 Van Ness Ave., 415-771-0183
When: All Week
Why: Enjoy a rare (and brief) opportunity to see all five Academy Award nominees in the category of Best Live Action and Animated Shorts. This year's live program includes The Confession (UK), the story of a quiet 9-year-old boy who is worried about making his first confession; The Crush (Ireland), the story of an schoolboy, in love with his Second Class teacher; and the American God of Love, in which a lounge-singing darts champion receives a package of passion-inducing darts.

2. Inside Job
Where: Lumiere Theatre, 1572 California St., 415-885-3201
When: All Week
Why: Charles Ferguson (No End in Sight) returns with the infuriating, painstakingly researched Inside Job, in which the Oscar-nominated filmmaker uncovers the causes of the 2008 economic collapse. Narrated by Matt Damon, Job traces the rise of a corrupt industry and exposes the troubling relationships that have compromised politics, regulation and academia, ultimately leaving millions on the unemployment line.

3. True Grit
Where: Sundance Kabuki Cinemas, 1881 Post St., 415-929-4650
When: All Week
Why: Those probing Joel and Ethan Coen's latest offering for some deeper meaning, perhaps something in the vein of the poetic nihilism of 2007’s No Country for Old Men, might be disappointed. True Grit is neither a deconstruction nor a reinvention of the Western; it is, rather, a worthy addition to a venerable genre – a classic adventure, a road movie set in the roadless countryside, as much a black comedy as a sly meditation on violence.

4. The Illusionist
Where: Clay Theatre, 2261 Fillmore St., 415-346-1124
When: All Week
Why: Adapted from a never-produced script written by French comedy icon Jacques Tati as a love letter to his daughter, Sylvain Chomet's melancholy, Oscar-nominated Illusionist is the story of an aging magician whose search for a stage leads to a most unexpected discovery: Alice, a teenager who idealizes him, applauds his every trick and ultimately comes to love him as a father.

6. The Social Network
Where:Lumiere Theatre, 1572 California St., 415-885-3201
When: All Week
Why: Until recently, Mark Zuckerberg, the man most responsible for the world’s largest online clubhouse, managed to remain largely anonymous outside his circle of business associates, who should never be confused with his buddies. David Fincher’s The Social Network changed that. Did Zuckerberg draw his tireless motivation to succeed from repeated rejections? Was he a misfit looking to fit? Perhaps – Fincher and screenwriter Aaron Sorkin can only hazard an educated guess, but the portrait they painstakingly create is compelling nonetheless.

7. The King's Speech
Where: Embarcadero Center Cinema, 1 Embarcadero Ctr., 415-352-0835; Sundance Kabuki Cinemas, 1881 Post St., 415-929-4650
When: All Week
Why:No need to rush on this one. After Sunday night, Tom Hooper's story of Bertie – the tongue-tied son of King George V, whose ascent to the British throne is complicated by his stammer – should enjoy a long post-Oscar run in theaters. But on the off-chance Speech doesn't sweep, take this opportunity to see Colin Firth (A Single Man) in another moving, cleverly amusing performance as Bertie, and Geoffrey Rush as Lionel Logue, the unconventional speech therapist who pushes the would-be monach to realize his potential.