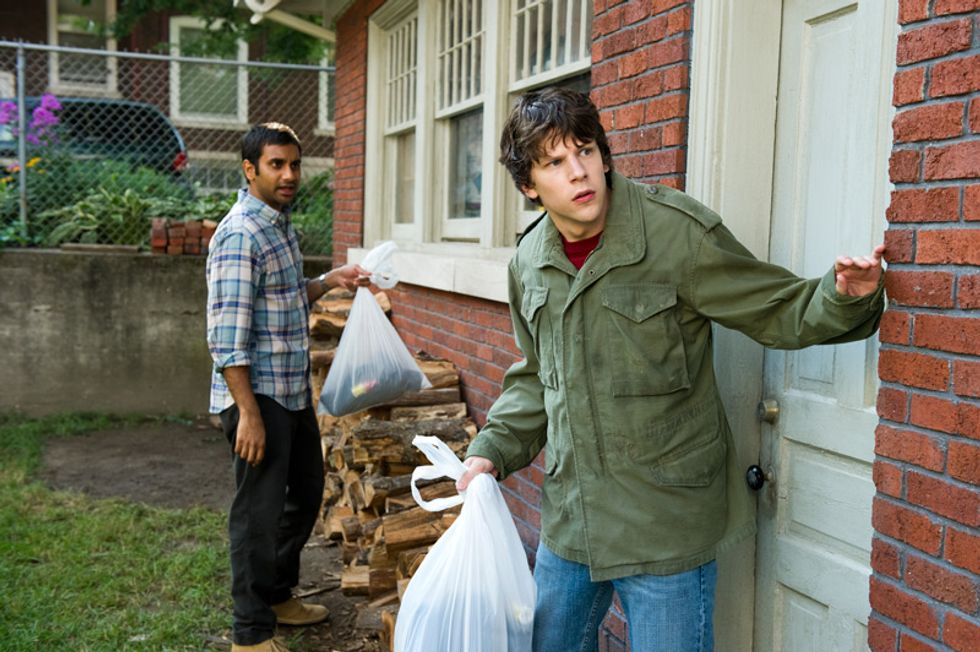 What’s got Jesse Eisenberg so jittery? The onetime Oscar nominee (for last year’s The Social Network) is so often cast as a stammering, quick-witted neurotic, like a younger, slightly more imposing Woody Allen, that it’s easy to believe the mannerisms are no act.

As it turns out, they’re not. Like fellow New Yorker Allen’s, Eisenberg’s mind seems to race at such speed that it’s no surprise when he pauses for a moment of reflection, then unleashes a torrent of rapid-fire thoughts. Today’s topic of discussion: his new comedy, 30 Minutes or Less, in which he stars opposite Aziz Ansari (TV’s Parks and Recreation) as a pizza delivery boy facing the most daunting deadline of his career.

To promote the movie, which opened Friday, the two have gamely agreed to serve slices at Connecticut Street’s Goat Hill Pizza, where a crowd has gathered to glimpse the stars, take pictures or perhaps snag an autograph. Asked to sign a poster, Eisenberg stares at it for a full minute. “What should I say?” he wonders aloud, the wheels starting to spin. “I don’t know what to say.”

The chemistry that drives 30 Minutes relies, of course, on the contrasting demeanors of Eisenberg – anxious and fidgety, even under the best of circumstances – and Ansari, whose deadpan sarcasm eases the tension. It’s a winning dynamic on screen, and in person they’re not much different.

On this day, the first stop on a publicity tour that will take them to pizzerias across the country, the boys have ordered out. Tacos are on the menu – an informed choice, considering their proximity to the Mission – though the South Carolina-born Ansari, 28, bristles at the notion that San Francisco pizza isn’t up to snuff.

“We’re not tired of pizza yet,” he says, eyes widening with mock (or is that real?) intensity. “I don’t think the pizza in San Francisco is mediocre. I’ve had great pizza here – did you ever try Delfina? Maybe people should do more research before making blanket statements about the pizza in this town!”

A brief staring contest ensues before Ansari, brightening, whips out his cell phone to check if his favorite Fog City pizza joint still exists. (“There it is,” he exclaims triumphantly. “D-E-L-F-I-N-A. Delfina!”) In the interim, Eisenberg, who still makes his home in the world’s unofficial pizza capital, recalls his experiences training as a delivery driver on location in Grand Rapids, Mich.

“I went out with a driver named Alex,” says Eisenberg, 27, who began doing children’s theater at 8 and admits he’s never had to support himself outside of acting. “His self-awareness struck me as very similar to my character’s, and what he has to do isn’t so different from what you see in the film. He goes out in the middle of the night, knocking on people’s doors and never knowing who’s going to answer.”

It’s a job Eisenberg doesn’t envy, though, as a New Yorker accustomed to public transportation, he relished the opportunity to drive for 30 Minutes. (He also anticipated working with comedian Nick Swardson, one of Eisenberg’s childhood idols, whose autographed picture once adorned the actor’s bedroom.)

It’s not because the life of a driver is beneath him – far from it – but because Eisenberg is aware of his own limitations. “I was worried about getting a normal job because I can’t do anything,” he says.

“I interned at a company about seven years ago, and I was fired after a week. I thought I should find something to do after the movies, but I can’t do anything where I have to be nice to people or I have to adhere to certain norms – I have to be able to create my own norms.”

That’s news to Ansari. (“You were so nice to people on the movie set!” he protests.) But Eisenberg isn’t some misanthrope who pursued a career in theater and later in movies – including Roger Dodger (2002), The Squid and the Whale (2005) and 30 Minutes director Ruben Fleischer's Zombieland (2009) – as a means of shielding himself from the daily routines of a less exclusive workplace.

If anything, acting – especially in a movie like 30 Minutes, where his character is strapped with an explosive and ordered to rob a bank – is, for Eisenberg, the next best thing to therapy.

“It – it’s not that I’m not nice,” he says. “It’s just that I read so much into every relationship. If I was doing a customer-service thing and I had a 30-second interaction with someone at a store, it would be on my mind all day. I’d wonder, ‘Did that person like me?’ And they’d have already left the store.

“But that kind of anxiety has actually been very helpful to me, in a way. When I’m not working, I get very agitated, and when I am working I don’t, because I get to express those feelings in a very safe and prescribed environment. I invest them in a character, and I’m much more comfortable that way. That’s my release.”

30 Minutes or Less is now playing at the Century Centre 9, the Century 20 Daly City and the Regal Jack London in Oakland. For tickets and showtimes, click here.