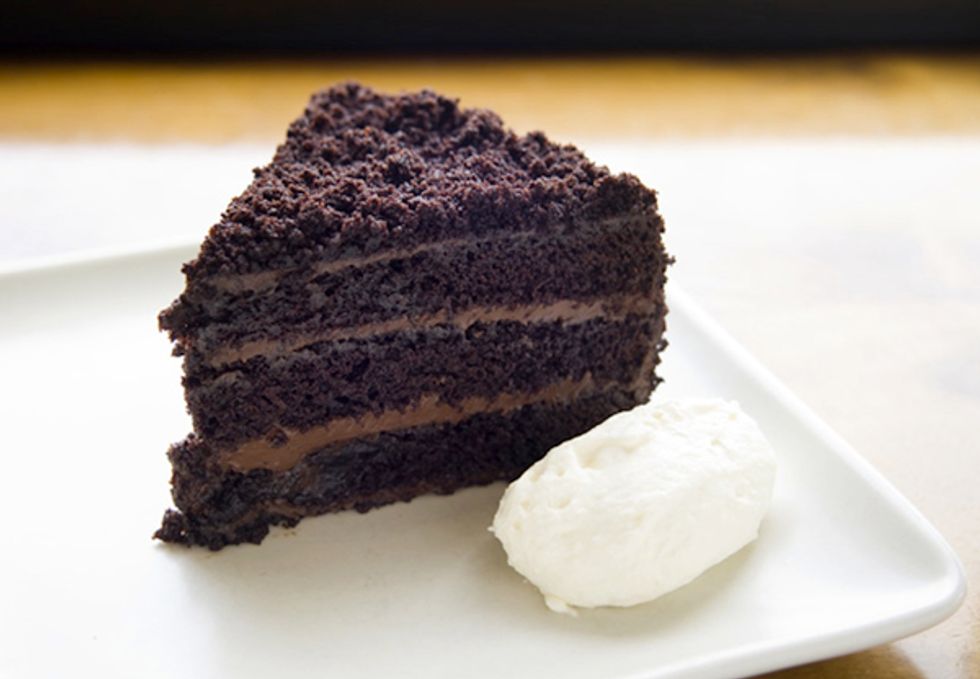 Layer Cake: Not Just For Birthdays

When I think of layer cake, images of smiling, neatly coiffed, white-aproned 1950s housewives come to mind. I think of childhood birthday parties, the Pillsbury dough boy, the red Duncan Hines cake box, and tubs of store-bought icing in pastel colors. It certainly doesn't seem to fit in with the images I've got swirling around San Franciso dessert menus: all homemade ice cream, seasonal pies, and tight-rope walking flavor experiments sprinkled with salt. I can't help but get excited when a layer cake shows up at a dinner out. They're few and far between, so let's take a look at the restaurants and bake shops around town that are taking the sentimental layer cake for a spin.

Park Tavern opened last month with just one dessert on its menu: a slice of birthday cake with layers of lemon-on-lemon action, and an optional candle. "Who doesn't like birthday cake?" said owner Anna Weinberg, when I asked her about it. The dessert lets you capture the trappings of a celebration on an average night out.

AtMission Beach Cafe, pastry guru Alan Carter says people often ask him to super size his Blackout Cake for birthday parties. This particular dessert is made with layers of Valrhona chocolate cake, spackled together with chocolate pudding, then rubbed with a layer of cake crumbs on top. It's rich and chocolatey to the core, but light enough that you can easily polish off a whole slice without even realizing what you've done. Carter says the retro-style cake is inspired by the Brooklyn Blackout Cake from New York's Ebinger Baking Company, which was laid to rest in 1972.

Over in the Marina, SusieCakes makes a vanilla "celebration cake" out of vanilla cake layers flecked with rainbow confetti. The whole six-layer affair is wrapped in a thick slab of pale blue buttercream icing. Owner Susan Sarich says its one of her most popular choices for birthdays, but you can also get it to-go by the slice.

Perhaps the most sophisticated of the bunch is Bluestem Brasserie's "Honolulu Hangover"—a heady combination of rum-laced devil's food cake and rum-vanilla pudding "icing"—born out of pastry chef James Ormsby's love for Mounds bars. His version is covered in a blanket of whipped-up coconut marshmallow meringue, then dusted with coconut flakes that have been caramelized in vanilla rum syrup. The "hangover" in the title comes from the cake's tendency to lean to one side with whipped topping hanging off.  But you know it's also got to refer to the withdrawl you'll feel once the sugary charge of a PG-13 cake slice leaves your system. Kid birthday parties need not apply.

No doubt, there's more layer cake out there. Tell us about your favorite slice in the comments.