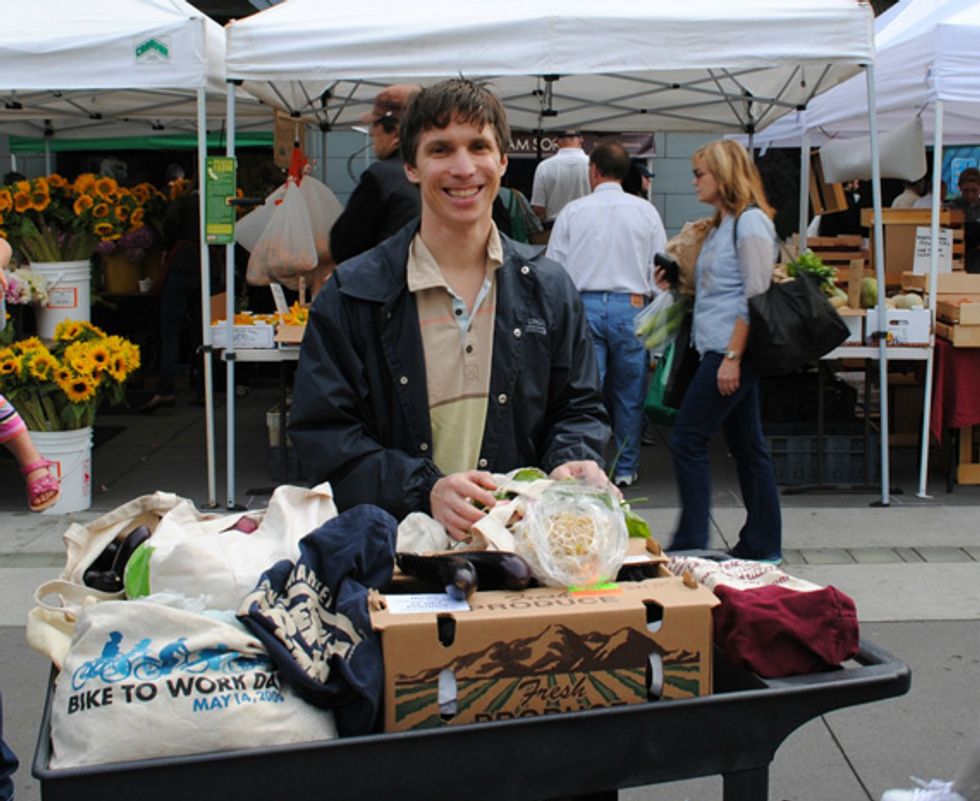 Market Watch: What Nojo Chef Greg Dunmore Is Picking Up at the Farmers Market

Greg Dunmore has been sourcing ingredients from the Ferry Plaza Farmers Market since his days as chef at Ame. At his recently opened restaurant, Nojo, in Hayes Valley, the menu is a playful interpretation of traditional Japanese food that showcases the seasonal produce from Greg’s favorite farms.

Last Saturday, Greg was kind enough to let me poke around his chef cart and see what he was picking up at the market. He’d made his first stop of the day at Brooks and Daughters Sprouts where he’d acquired a big bag of Mung bean sprouts that were perched on top of a pile of Japanese eggplants. “I’m using them in a couple of ways right now — in a salad and on our pickle plate,” he told me. For the Summer Tsukemono (a plate of pickled market items) Greg first lightly blanches the sprouts, and then tosses them with toasted sesame oil, rice wine vinegar, and toasted sesame seeds. “It’s really easy, quick pickling,” he says. “Twenty minutes and they’re done.”

Besides the Mung beans and eggplant, which would be roasted whole, chopped, and then added to the miso soup at Nojo, Greg had also been gathering up mushrooms from Far West Fungi, radicchio, radishes, and onions from Dirty Girl and okra from County Line Harvest. The okra would be used to garnish his tomato-based version of Chawanmushi, a savory steamed custard that is a new addition to Nojo’s menu this week.

Greg‘s last stop for the day would be at the Hodo Soy stand to pick up tofu, which he uses in a variety of ways, including a fermented cheese. To make his tofu cheese he presses the tofu with yellow miso, a mellower version than the barley based-miso used in Nojo’s soup, and cures the mixture for about two months until it acquires a soft, dense texture similar to cheese.

Greg’s love for local farming was the impetus for choosing Nojo’s name, which means farm in Japanese. Talking with Greg about his enthusiasm for the farms and farmers at our weekly market definitely inspired me to do exactly what it says on the back of the restaurant’s staff t-shirts-- support my local Nojo.