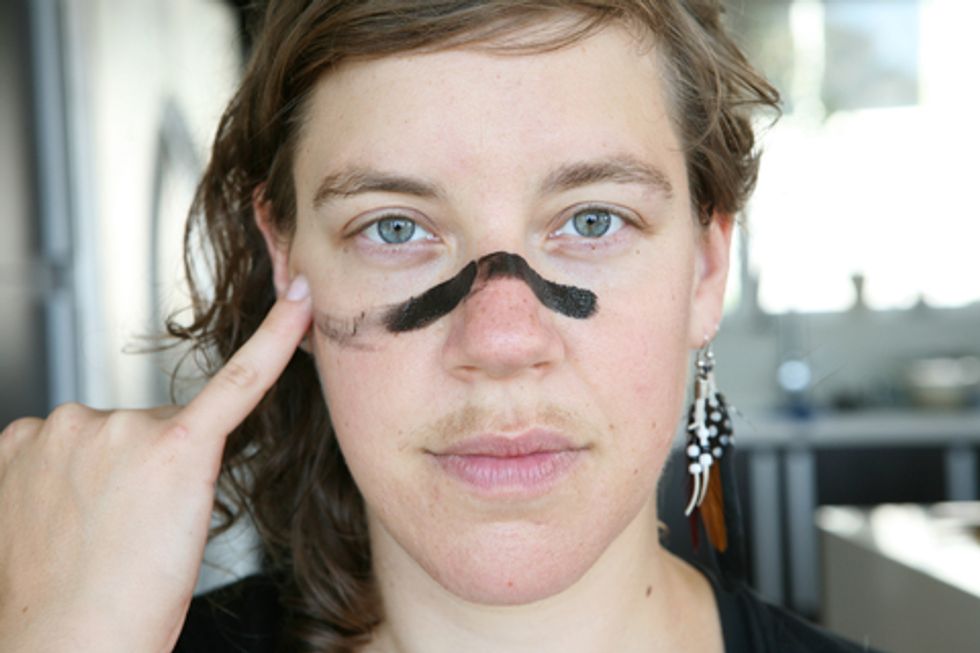 Let’s admit it — in the Bay Area, music fans are spoiled. The train of fascinating world-class music is never-ending, even during the holidays. We were reminded of this last night on Thanksgiving Eve, when the tribal jazz pop of adopted Oaklanders tUnE-YarDs filled the Regency Ballroom. In that spirit, here are 9 reasons we were thankful:

1) Bandleader/multi-instrumentalist/singer Merrill Garbus’ seemingly infinite vocal range. She grunts, she incants, she chants, and generally sings gnarly from the throat. And then, often in the same breath, she sings like an angel. No register is left unturned. Girl has a gift.

2) Dueling saxophones. Rarely do we get such a high saxophone-to-bandmember ratio, but Garbus insists on two saxes in her four-piece set. The saxes stole the show on more than a few occasions, most notably on the single “Bizness” and their drowning sax lines during the outro.

3) Face paint. As is custom for Garbus and co., their tribal leanings are reflected in their visual aesthetic. Garbus looked like an urban Pocahauntus with her cheeks distinguished by colored stripes. It was an odd but visually intriguing thing to behold the day before Thanksgiving.

4) The song “Powa.” If you haven’t heard  it, download it. Like, right now. We’ll wait. OK, see? The chord progression seems to channel Green Day’s “Brain Stew,” albeit in slow-mo. Instead of punk rock thrashing, they take it down to a sultry, lounge-y notch. Its hook is lazy but irresistible, and Garbus’ vocal bending becomes prominent and surreal between the lines.

5) The onstage studio factor. Garbus initially came onstage by her lonesome for “Do You Want to Live?,” (she did this song at Great American Music Hall last time), and with the help of loops, was a one-woman band, providing all her own back-phrasing and percussion, and leading us in a call and response section, presumably to wake us up. To her question, our answer was a resounding yes; yes, we would like to live, that sounds lovely.

6) The dancing. Who knew? tUne-YarDs’ tunes are shockingly danceable, and the crowd was into it. Really into it. Especially a select group of Occupy-chic kids toward the middle-back who — bless ‘em — couldn’t keep a beat to save their lives. No matter.

7) Garbus’ ukulele. Even though she seems to have a love-hate relationship with her uke, telling the crowd that "this is the last show this ukulele is gonna play," Garbus harnessed the instrument with assertive picking and clever chord progressions. If it was the last show for the uke, it went out with a bang.

8) Words of wisdom. Garbus had some poignant advice for us: Irked by a friend she ran into before the show who was “just trying to get through Thanksgiving,” she had a thought: “If you find yourself feeling that way over Thanksgiving, give something to somebody. I think you’ll feel much better.”

9) Pat Jordache. Oops, we got to the Regency too late to see these deliciously odd openers (8 p.m. start time on a non-school night? pshhh). But we can report, after giving their debut album “Future Songs” a few listens this week, that theirs is an intriguing sound, with clever bass meanderings and spooky-deep vocals and cryptic sonic textures abounding. Start with “Radio Generation” and proceed.