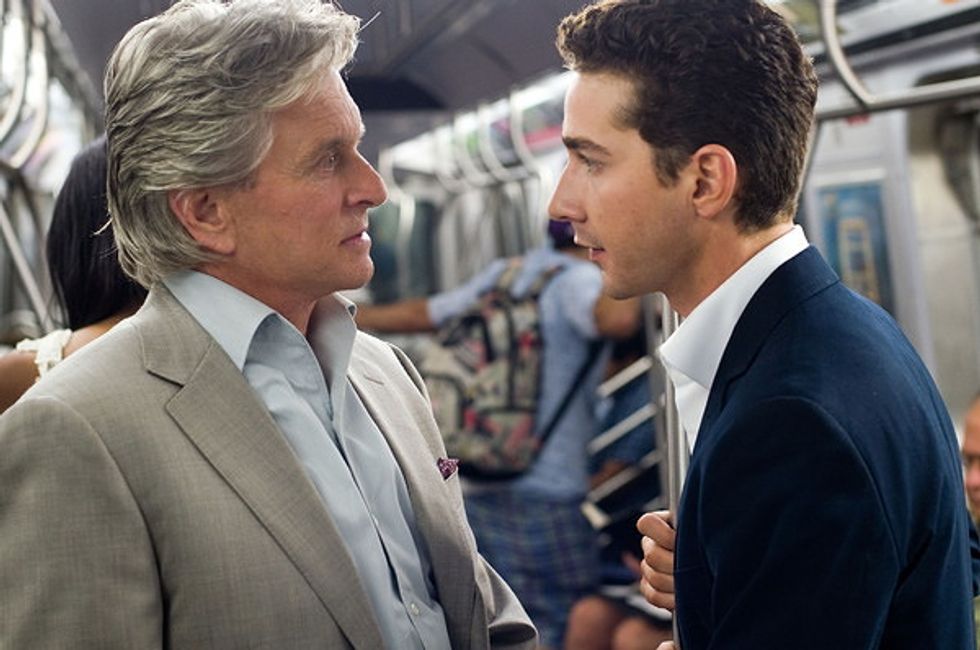 Perhaps the greatest validation of Wall Street, Oliver Stone’s eloquent 1987 take on big-business corruption, was the eventual exposure of white-collar con men like Kenneth Lay and Bernie Madoff, whose unchecked greed would, years later, cost those who trusted them – and America – dearly.

Stone could at this point have let the facts speak for themselves, but instead chose to resurrect Gordon Gekko, the reptilian corporate raider, made famous by Michael Douglas, whose credo – “greed is good” – became the unofficial mantra of the Me Generation.

In hindsight, Stone should have left Gekko behind bars, a casualty of his own hubris and shark-like appetites, but here he is, back on the New York streets he once owned, in Money Never Sleeps. And to what end? To reclaim his position as the patriarch of a family we never knew? Or to re-establish his empire?

Gekko, who claims eight years in prison taught him that time, not money, is man’s most precious commodity, seems to want both, though he slyly downplays his Wall Street ambitions. He’s out of the stock-market game, he says, but we know better. Men like Gekko crave money (or the pursuit of it) the way others need oxygen.

That’s not to dismiss Shia LaBeouf’s credibility as heir to Gekko’s tarnished throne. As Jake, LaBeouf sparkles with the jittery energy of an up-and-comer awed by his future father-in-law’s legacy. Can the left-leaning whiz kid live up to it? No – because he’s not a killer, and money is not really his endgame.

LaBeouf holds his own most comfortably opposite Susan Sarandon, who plays Jake's cash-poor mother, and Mulligan, whose daughter of privilege remains understandably wary of her slippery dad. But it's hard to imagine Jake, clever but transparently eager to please, winning Gekko's confidence. (As it turns out, he doesn't.) Has the once-voracious master of the universe, his slicked-back, Pat Riley hairdo replaced by a more free-flowing mane, gone soft?

Yes and no. Stone, who passed off writing duties for Money Never Sleeps to Allan Loeb (21) and Stephen Schiff (True Crime), serves notice that Gekko has lost none of his edge, never more so than when he brazenly announces his return to the moneymaking arena. Douglas, gamely reprising the role that won him a well-deserved Oscar, clearly relishes the moment. Presumably humbled, the shark is back, his teeth sharper than ever.


Stone should have stopped there, with a flawed but satisfyingly authentic portrait of a man myopically living for the almighty dollar, but he can't resist the urge to give Gekko a heart, too, along with a feel-good finale that's irritatingly implausible.

Wasted in Stone’s convoluted mix of subplots are Sarandon, whose wannabe real-estate queen seems to have wandered in from the set of another movie, and Josh Brolin, as Bretton James, a hedge-fund heavyweight playing fast and loose with the law. That James ultimately suffers a fate similar to Gekko’s is no great surprise, but his reckoning lacks impact – the character feels like an afterthought, his ruin a too-obvious indictment of Wall Street recklessness.

Money Never Sleeps is entertaining enough, particularly for those, like myself, who consider Stone’s original timeless. Driven as much by Sheen’s naïve pupil as by Douglas’ ruthless insider, Wall Street was an astute reflection of its day, but also of the greed implicit in aspects of the American Dream.

Stone’s follow-up is timely, too, but what is the director trying to say? That greed might not be so good after all? That, on Wall Street, perception is reality, and that irresponsible speculation wrecks lives and economies? Fair enough, but did we really need Money Never Sleeps to tell us that?