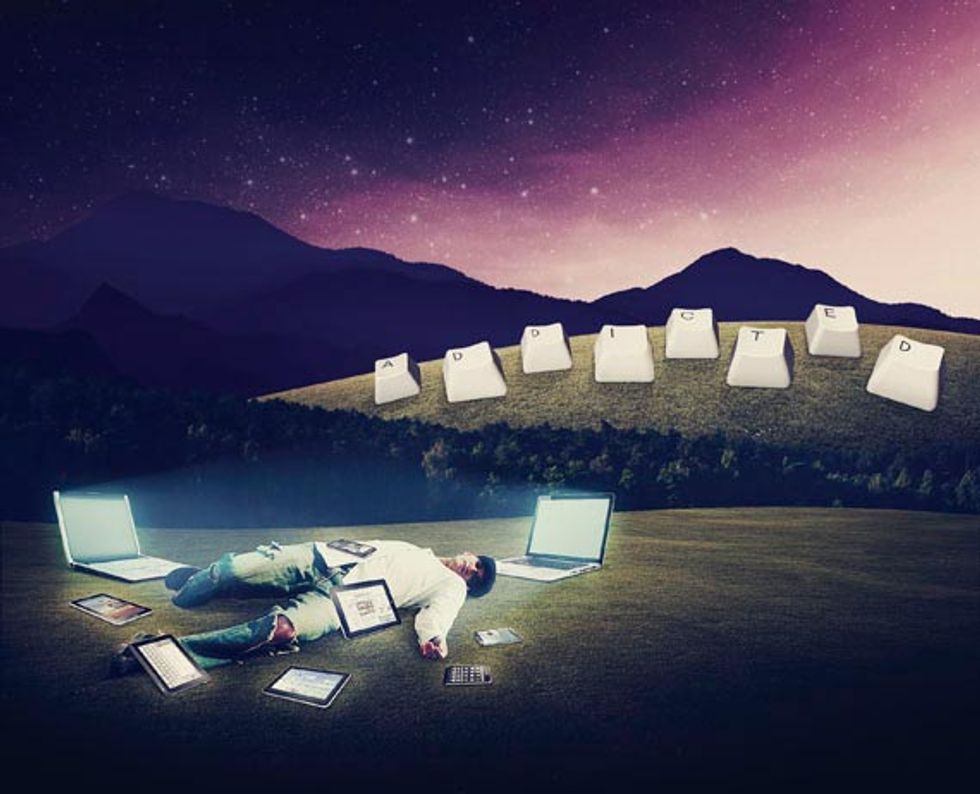 Recharge Your Batteries with a Timeout from Tech

You have tweeted, updated your status, liked something, and Instagrammed your breakfast—today. This is normal in our tech-obsessed town, where the brightest luminaries aim to integrate tech into every aspect of our lives. But is there a dark side to digital? As it turns out—yes. While attwiction (Twitter addiction) may seem laughable, “Internet addiction disorder” really is a thing—it is being considered for inclusion in the 2013 Diagnostic and Statistical Manual of Mental Disorders (DSM). And, one study shows that 61 percent of people confess to internet dependence. Say it with us: Detach from the device.

“I was bingeing on my work,” says Levi Felix, a former Causecast.org vice president whose 60- to 80-hour workweeks were fueled by cigarettes, take-out, mass coffee consumption, and very little sleep. But Felix (28) soon learned the perils of the fast-paced tech world: At SXSW in 2009, he was rushed to the hospital for a torn esophagus.

After three days in the ICU, six months of reflection, and one enlightening trip to Burning Man, Felix ditched his day job and took a six-month hiatus with his girlfriend, Brooke Dean, on a remote island in Cambodia. “I didn’t put on a shirt for 10 days,” he says. The respite proved so rejuvenating that when a friend (and former MySpace director) visited the unwired oasis, he urged the couple to spread the word.

Now, as founders of The Digital Detox, Felix and Dean are bringing their experience home with a monthly four-day retreat at Orr Hot Springs Resort in Ukiah, California (the next is Oct.18-21). A kind of speed rehab for prominent digital strategists and staffers from Google, Facebook, and Mashery, The Digital Detox recreates the peace and focus that Felix found abroad.

The goal: Check your gadgets, watches included, at the yurt door, and reconnect with yourself. Work talk is prohibited. Drugs and alcohol are a no-no. And the use of any technology is like a relapse at Betty Ford. True seclusion (and no WiFi) prompts decompression. As does 24-hour access to hot springs surrounded by awe-inducing redwoods.

But for brains so predisposed to tech addiction, taking the cold-turkey approach can prove challenging. “When I told my family I was going, their reaction made me think, ‘Oh, do I have a problem?’” recalls social media strategist Kyra Reed. But fear not. Felix and Dean’s approach is more about nourishment than deprivation. Rehabbers can relish a daily diet of meditation, yoga, guided hikes, journaling, and Ayurvedic-inspired cooking.

“It’s cool having a setting where the focus isn’t on your job title,” says former Googler Jonathan Lally, who spent his time there painting. “It was nice to get back in touch with that part of myself,” he says.

Should 96 hours sans a tweet make you twitch, you can sample freedom at The Digital Detox’s new happy hour, Device Free Drinks (on October 11 at Jones—RSVP at devicefreedrinks.org).

HOW TO UNPLUG: A SEVEN-STEP PROGRAM (by Levi Felix)

Snooze Free Wake up with an alarm clock instead of your cellphone, and ease into the day. You’ll sleep better without the urge to check your messages.

Bathroom Break-Up 75 percent of Americans text, make calls, and browse the web via their smartphones on the toilet. And 16 percent of those phones show traces of fecal matter.

Walk It Off Take a 20 minute walk in the park to increase effectiveness at work. Holed up? Studies show just looking at pictures of nature can improve concentration.

Cellphones Off The Table Treat meals as a time to connect with people and think about your food and where it came from. You’ll feel more present.

Muscle Memory Next time you want to snap a photo, try drawing a picture or writing about it instead—you’re more likely to retain the moment by working your memory than by posting a pic to the web.

Hug Someone When we interact online, spikes in dopamine and oxytocin lead scientists to believe we’re becoming addicted to technology (we associate those feelings with our gadgets instead of the humans on the other end). Get a mega dose of oxytocin—and lower stress levels—with a nice big hug, 9–20 seconds long.

Make Love, Not SMS A recent survey found 25 percent of people have taken a call during sex. Seriously. Be a better lover, and leave your cellphone outside the bedroom. Your sex life will improve, and you’ll be less likely to lose your partner.