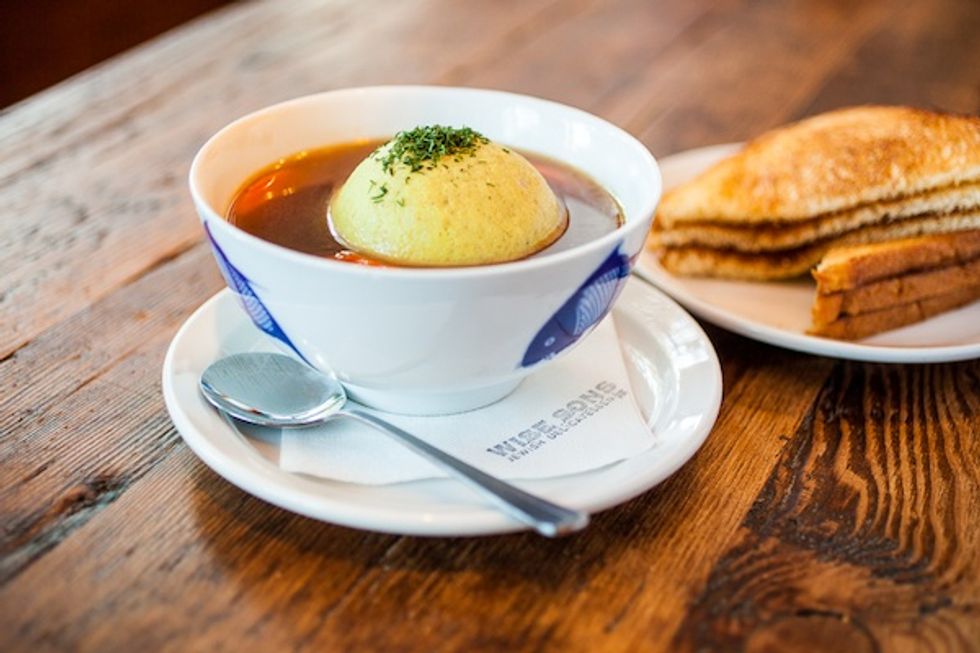 Flu season has arrived in full force this winter. What better way to ease those sniffles and calm that sore throat than with a hot, hearty bowl of matzo ball soup? This soup, a Passover tradition, is by no means a delicacy. In fact, we'd venture to say that no San Francisco chef would dare change the simplicity of this comforting dish. I delved deeper into San Francisco’s matzo ball soups to find the best, most traditional bowl.

Traditionalists and hipsters can finally agree: This hot spot may be owned and run by two young Mission boys, but it doesn’t lack authenticity or tastiness.  Despite the fresh faces in the kitchen, the food here is authentic Jewish cuisine—the kind your bubbe used to make. Woody Allen himself was spotted with a bowl of the good stuff while in town filming his new movie. Hey, if it’s good enough for Woody, it’s good enough for me.

Broth: Rich and well flavored, with extra dimension from lots of fresh herbs and seasonings. Fresh cut carrots, hefty pieces of torn chicken meat, and not too many thin noodles.

Balls:  One ball per bowl and larger than I prefer (bigger is not better when it comes to matzo balls), but the matzo still has the density and bite of its smaller counterparts.

Winner of Guardian’s 2012 “Best of the Bay: Best Kind of Strict” award (yes, that exists), this matzo ball soup is not to be missed. For once, a dietary restriction doesn’t mean sacrificing flavor. This kosher soup, homemade by co-owner Faina Avrutina, is savory and aromatic. Sadly, however, Israel’s Strictly Kosher is closing in February, so hurry in to try their soup and pastries.

Broth: Can be made with chicken broth or with a vegetable base, for all you vegetarians. The soup has pieces of real, large chicken legs. Also, it comes fresh or frozen if you want to stock up for the winter!

Balls: No joke, these bad boys are the size of my head.

How can a deli with such a kitschy name serve anything but delicious, traditional Jewish goods? Moishe’s Pippic, meaning belly button in Yiddish, recently celebrated its 25-year anniversary. The Hayes Valley deli is obviously doing something right, because people keep coming back for its signature sandwiches, daily fresh-made chopped liver, and famous matzo ball soup.

Broth: Simple, to the point, and perfect for a sick day. A few carrots and onion punctuate the modest broth.

Balls: The perfect size for me, they're small enough to fit three per bowl. These little guys sport just the right combination of dense and fluffy, Moishe’s serves my favorite matzo ball of the bunch.

A perfect dining spot after the opera, a concert, or a movie, Max’s has an extensive menu with various options for different palates. While much of their food is basic diner fare, the matzo ball soup stands out as something special.  Enjoy a bowl with a small salad for a nice, light meal.

Broth: Swimming with carrots, celery, and onions, with a few thicker-than-average noodles.

Balls: Medium in size and a density to match. They're perfect for those who like a larger ball, while still retaining a solid texture.

This beautiful, bayside restaurant is the perfect place for a sunny day lunch.  But don’t let the gorgeous views and shining sun let you forget that this is still San Francisco, after all. It’s never warm enough to squelch that craving for hot soup on a chilly day. So bundle up, head to the Embarcadero, and warm up over a bowl of Delancey's matzo ball soup.

Balls: Good size (small enough to fit two), but, unfortunately comes just one-per-bowl. Luckily, the one ball is good enough to make up for its lacking of size.

Have a favorite, no-frills bowl that didn't make the list? Let us know in the comments!