Poetry, Memory, and the Culinary Art of Atelier Crenn

To the best of my recollection, I've never cried in a restaurant, although on my recent visit to Atelier Crenn, I came close.

It was in the midst of the seventh course—osetra caviar with a velvety cream of koji (a type of fermented rice with flavor-enhancing properties) and daikon, whose buttery slices brought to mind the most exquisite scalloped potatoes—that I glanced up at an artwork on the wall. It was a poem, in gilt letters, about two people on a sand dune. There was a fierce sense of love—platonic, it seemed—and the implication that the person to whom the poem was written, was gone forever. As poetry goes, it was plain and unaffected, but its power caught me off guard. Feeling a tightening of the throat and the onset of tears, I looked away, and in need of a prop, lifted a glass of sake ('Sawahime' Shimotsuke Junmai Daginjo) whose fine earthy sweetness carried me back to childhood, the New England woods, and memories of drinking the sap of sugar maples, raw and cold, from buckets hanging from the trees.

Whether this is chef Dominique Crenn's intent, whether the aim of her poetry—both on the wall, and on the menu—is to grab the reader by the heart, or whether the dishes she conjures up out of particularly vivid moments from her past are supposed to send her guests on similar reveries of their own, I'm not sure. But when one is in a certain state of mind—open, receptive, setting aside the cynical impulse as well as any expectations of what food, or a menu, or a restaurant for that matter, should look like—an evening at Atelier Crenn can be a transcendent and transportive thing.

Crenn opened Atelier Crenn—the name an homage to her late father's painting studio—in January 2011. The restaurant received its first Michelin star that year, and in 2012, Michelin awarded a second star, making Crenn the first female chef in the U.S. to win the honor. Atelier Crenn has retained its two-Michelin-star rating to this day. Last year, she was recognized as the world's best female chef by The World's 50 Best Restaurants, and featured in an episode of the Netflix series, Chef's Table. In a recent conversation, Crenn was circumspect about the notoriety, acknowledging that while it had led to many opportunities, she is mindful of the need to choose carefully from among them.

More recently, Crenn made several changes at the restaurant. Last December, she bought out her longtime business partner. In April of this year, she hired Jonathan Black (formerly of Quince and Per Se) to serve as the executive chef of the Crenn Dining Group (which includes Petit Crenn, and the forthcoming Bar Crenn, due to open in Cow Hollow next month), a move that she said has allowed her to focus more fully on the creative process. That same month, Atelier Crenn revealed a redesigned dining room, whose softly illuminated wooden-slab tables, each set apart on its own Persian carpet, imbue the space with an almost séance-like atmosphere.

On the evening in question, the Grand Tasting Menu began with Crenn's classic amuse-bouche, Kir Breton: a cherry-sized bauble with an ultra-thin white chocolate and cocoa butter shell topped with a tiny piped-on button of jellied crème de cassis. Popped gingerly in the mouth, the candy shell collapses in an instant, unleashing a cold little rush of apple cider, followed by the creamy-sweet remnants of its vessel. 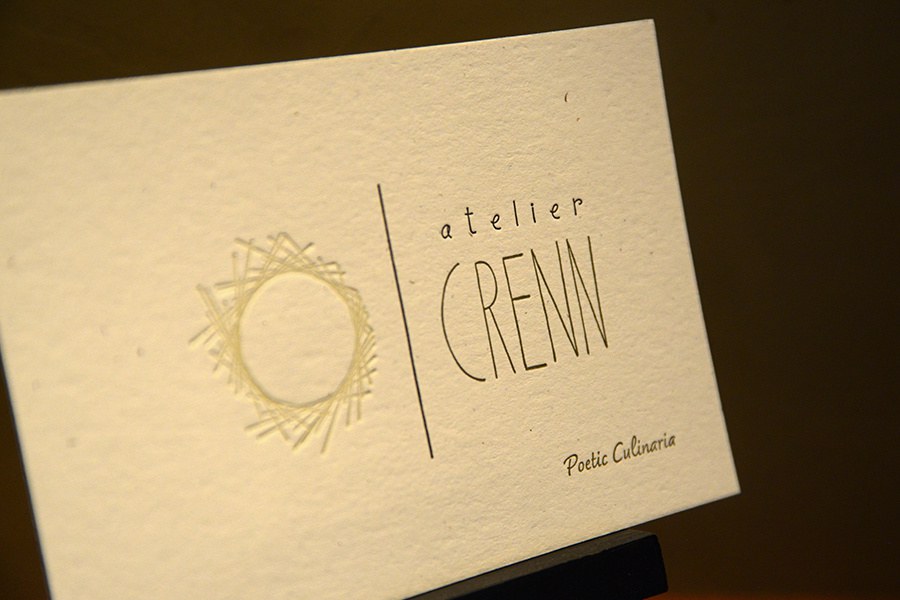 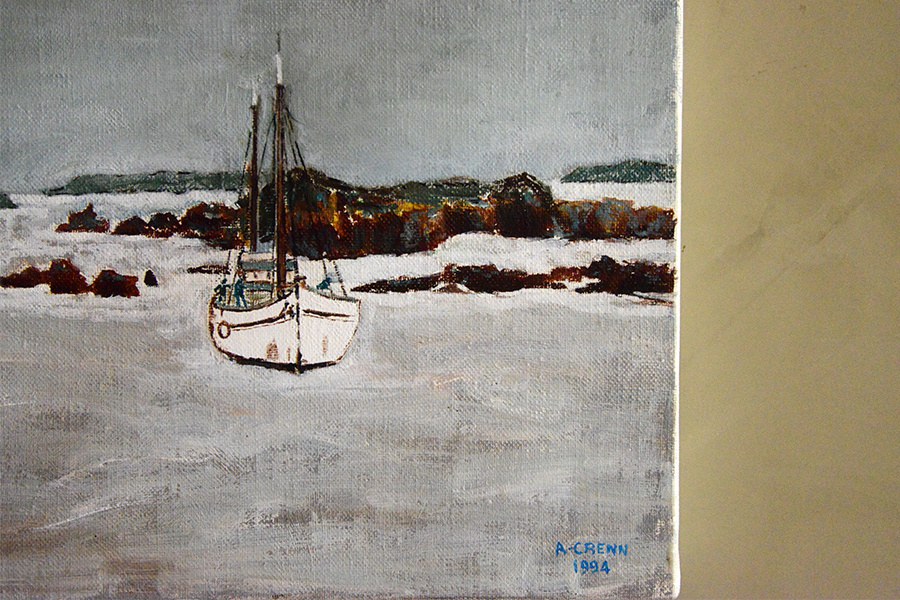 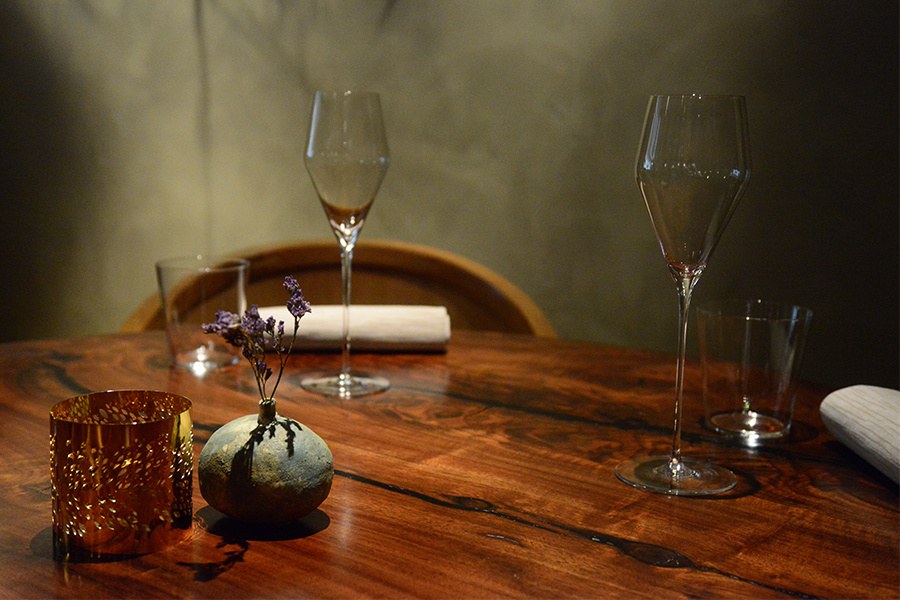 The centerpiece of each table: a tiny bouquet 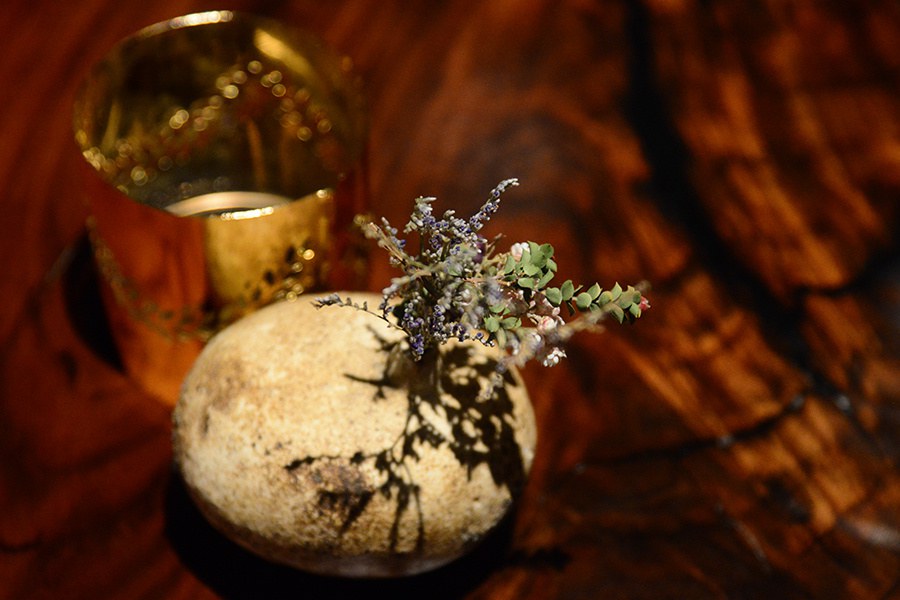 Atelier Crenn's menu takes the form of a poem 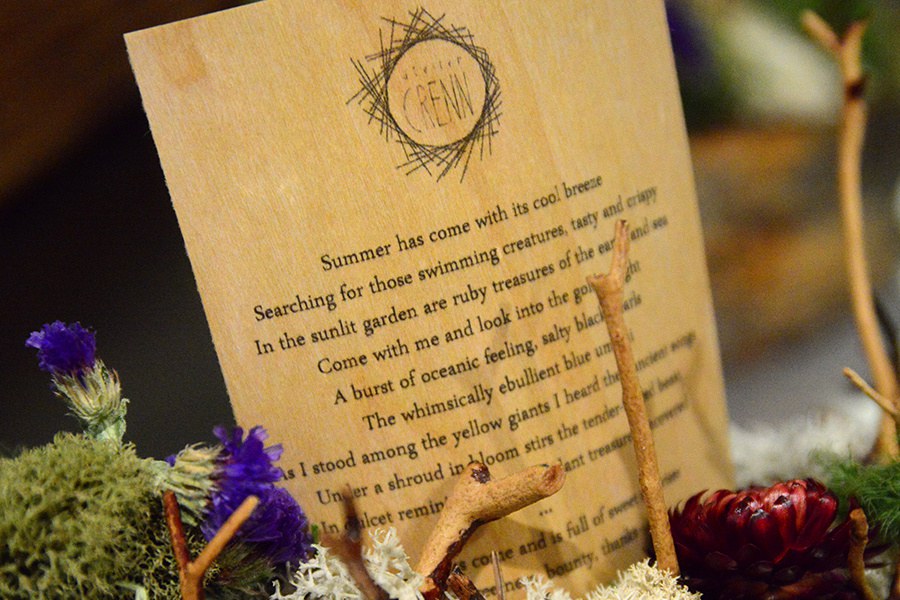 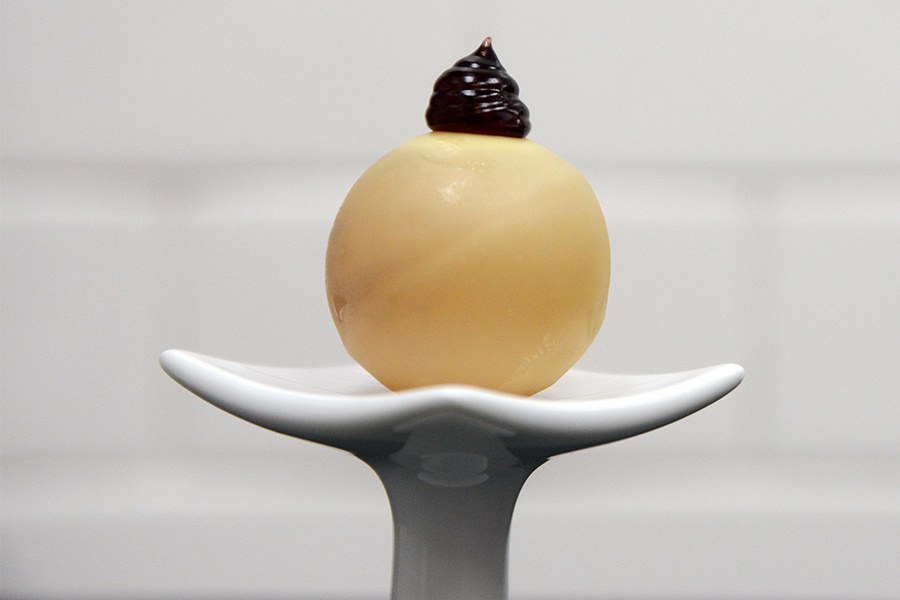 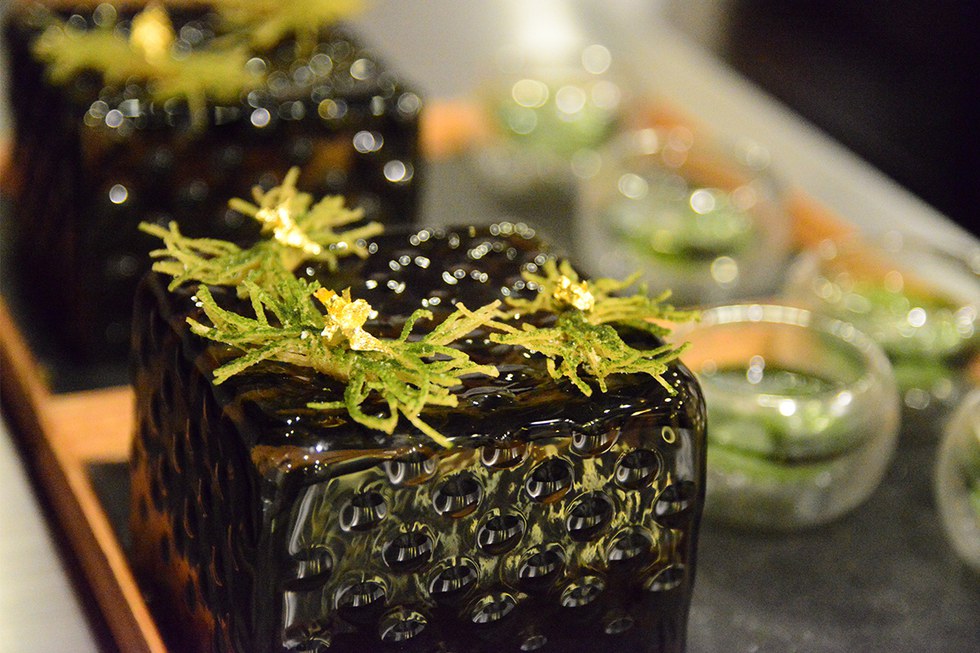 Smoked trout roe in a tiny pie shell made from buckwheat, the latter a culinary ode to Brittany 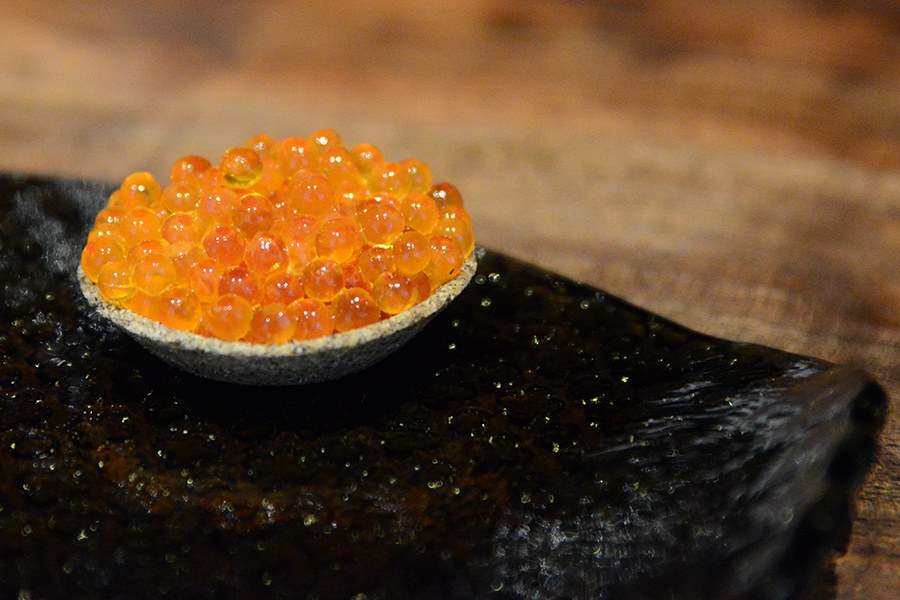 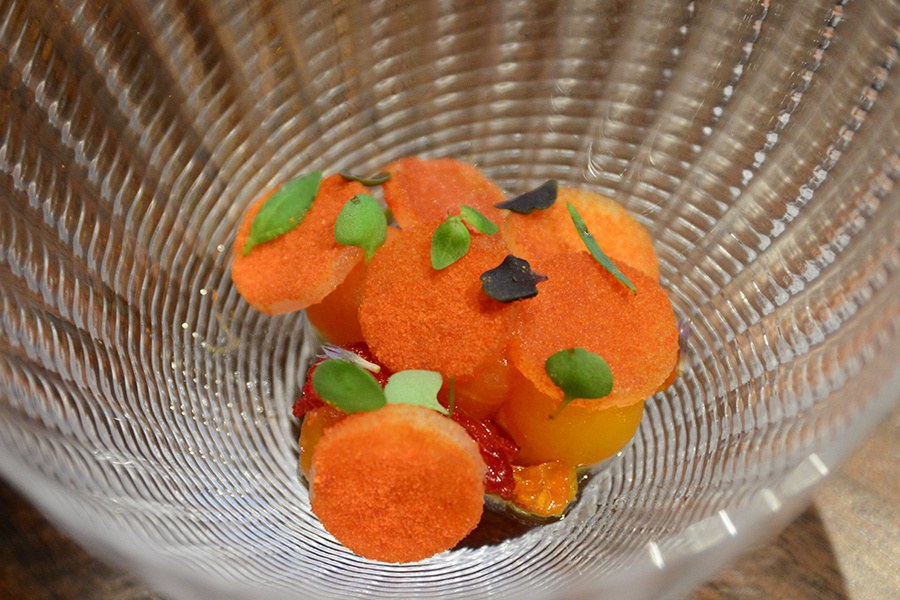 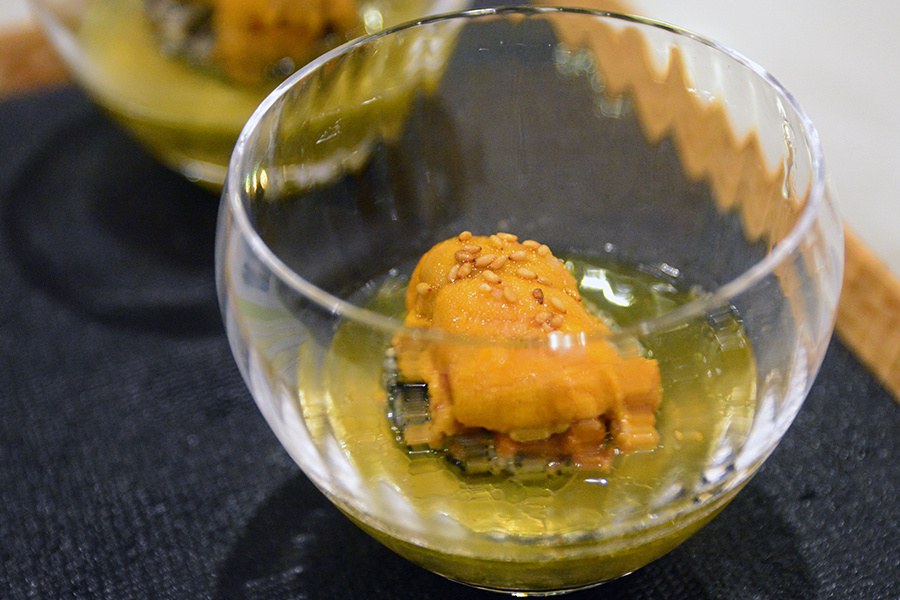 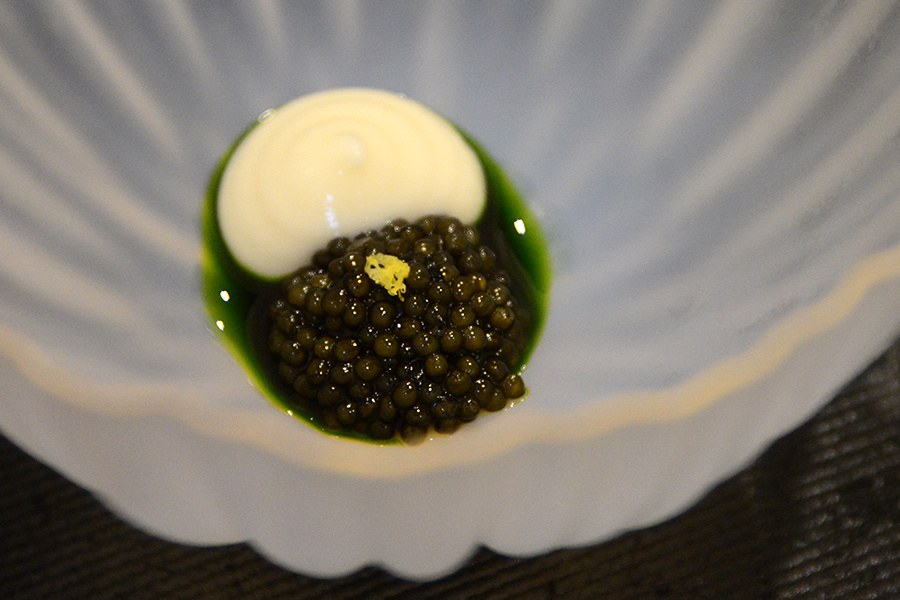 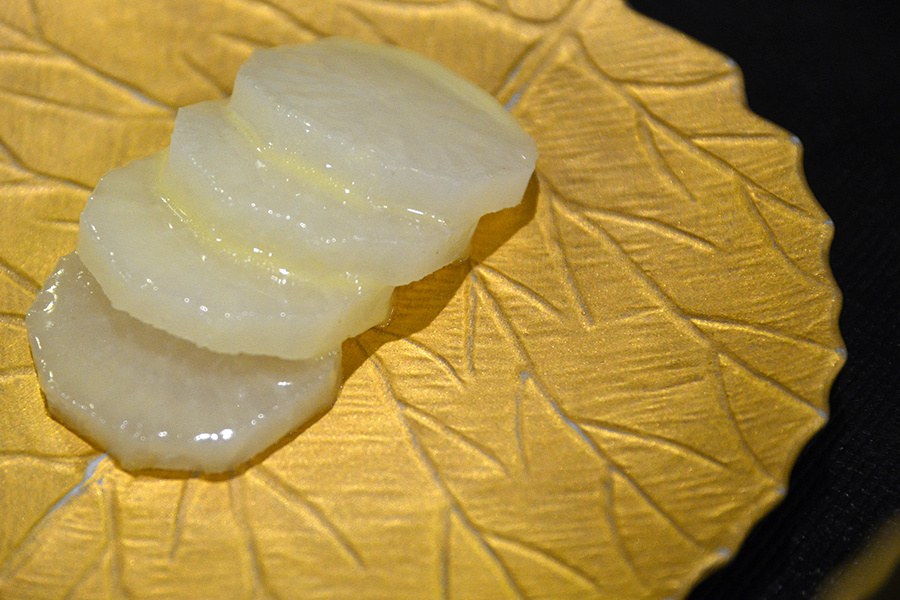 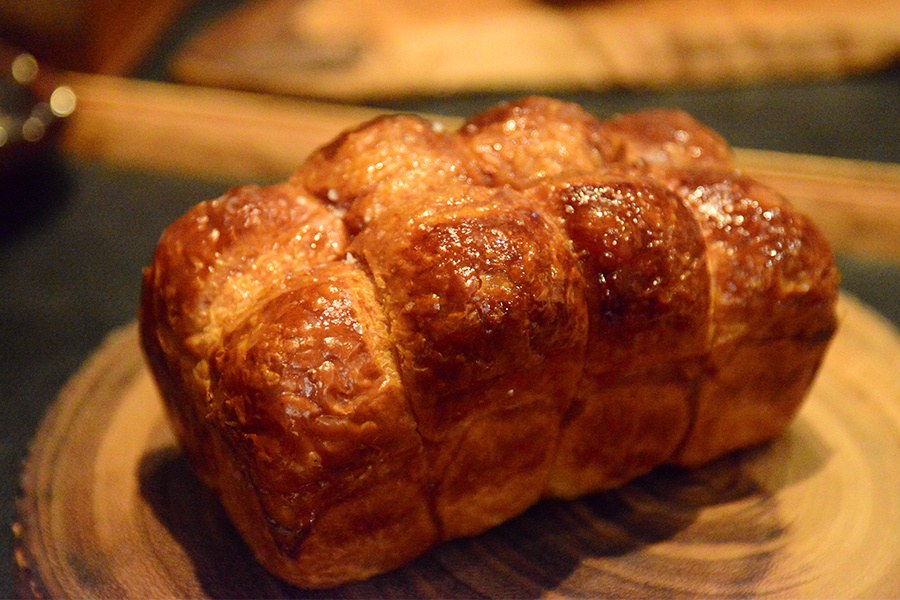 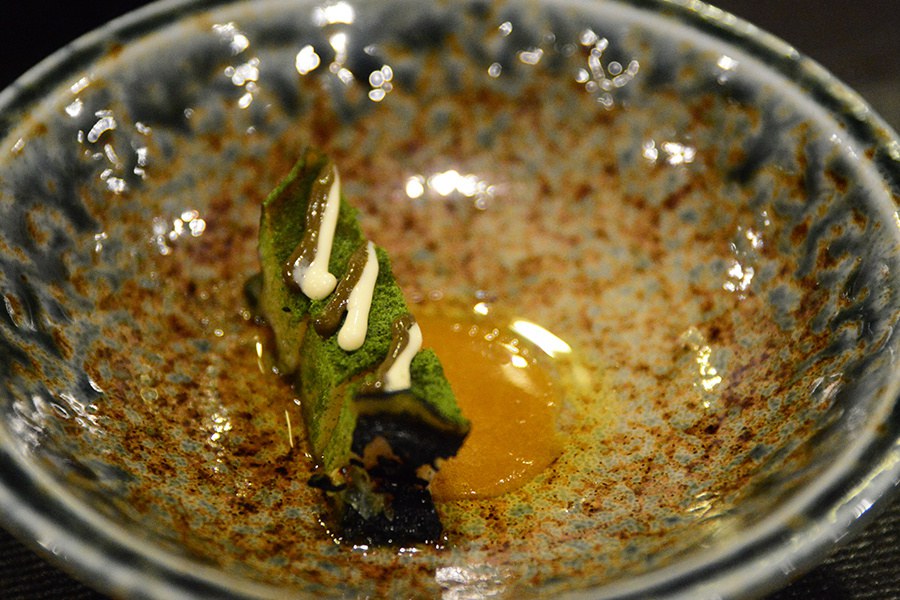 Fermented and grilled corn, beneath a blanket of sunflower petals 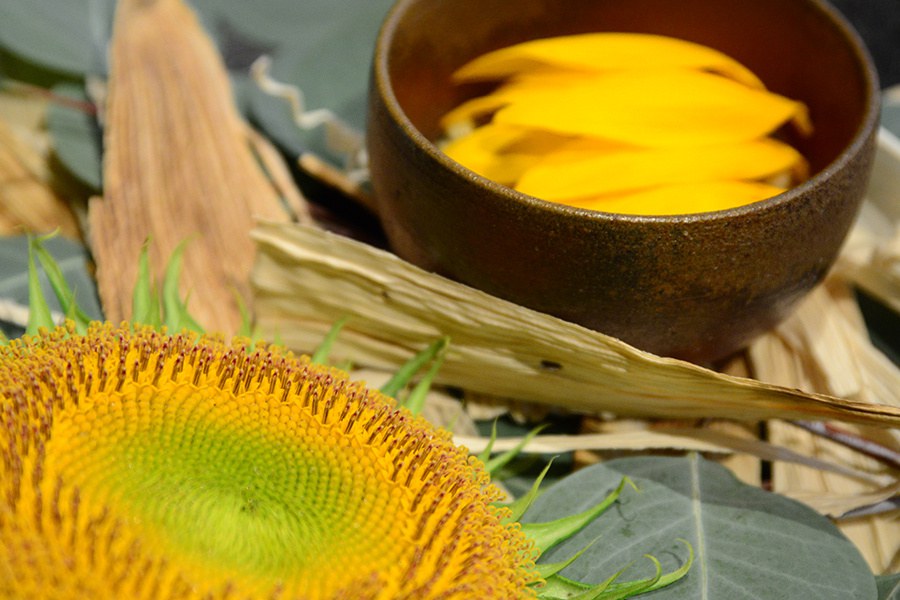 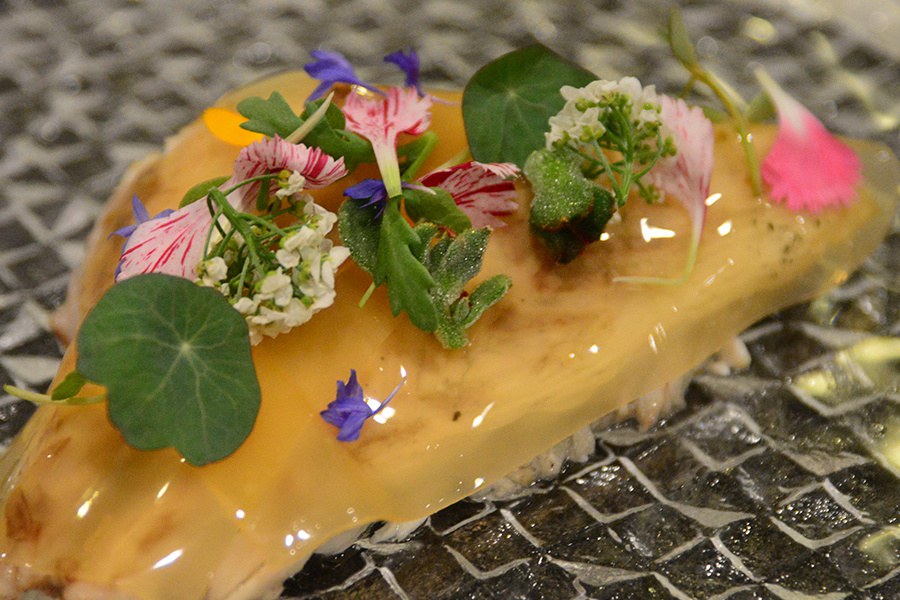 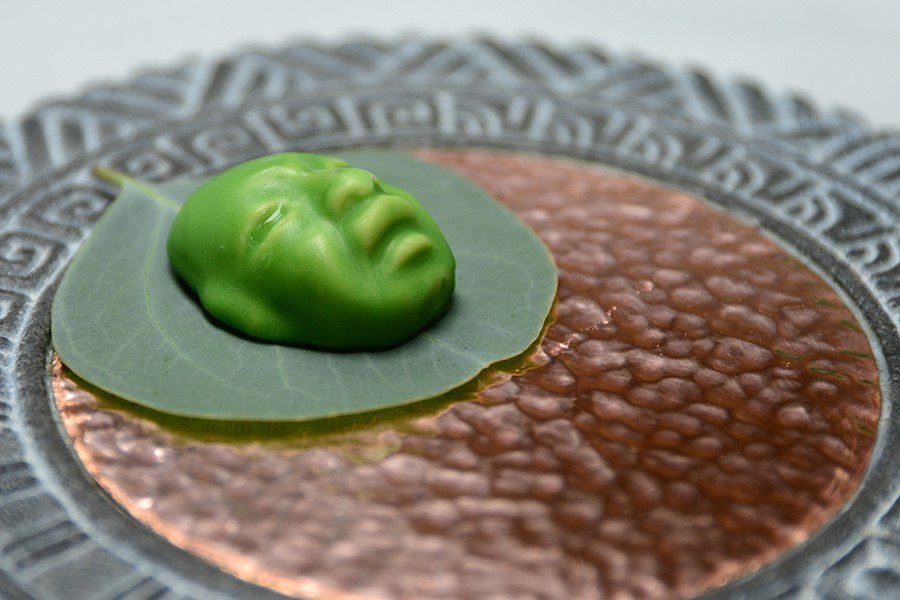 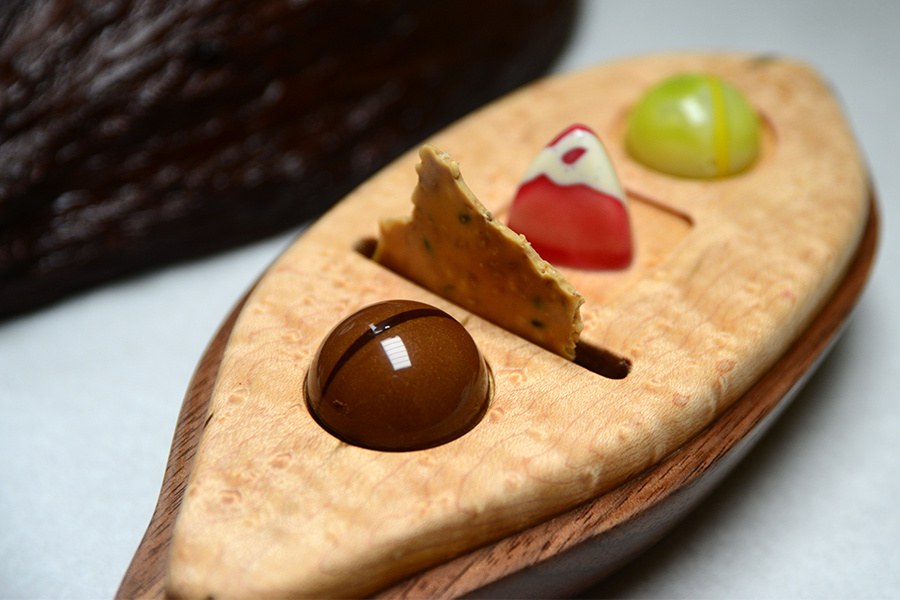 The playfulness continued with Fish et Chips, a curious, and curiously delicious interpretation of the British staple. The furthest thing from a battered and fried filet of cod and French fries, Crenn's version consists of a small glass bowl of swordfish bone marrow and cucumber gelée, and tiny, nibble-sized bundles of crisp potato threads seasoned with malt vinegar.

My dining companion's eyes widened as she munched a diminutive buckwheat cracker shaped like a pie crust and filled with glowing orange orbs of smoked trout roe. "It's like eating a campfire," she said. Which sounds strange, and inadvisable, but spot-on. Accompanying this delicacy, a small salad of canary melon and tomato—the latter in many forms, from fresh to powdered to confit. The wine pairing had gotten underway by this point as well, its first salvo a pale straw yellow sancerre with notes of honey, melon, and fruit tree blossoms, from Domaine Pascal Cotat.

A dish of sea urchin, Koshihikari rice (a variety used for sushi) and a Provençal-style barigoule broth was particularly arresting. Served in a snifter-like bowl, its deep, savory aroma took me straight to 1980, and an inn somewhere on the Schneeberg, a mountain in Lower Austria where I first learned the joys of Knödelsuppe—a Tirolean dumpling soup. The urchin, poached in butter, was impossibly creamy, its flavor slightly more mellow than when served quiveringly raw; the rice, which acted as both a pedestal and a float for the uni, was crispy, sticky, nutty and sweet. An outstanding grüner veltliner from F.X. Pichler—a winery in Austria's Wachau region, on the banks of the Danube west of Vienna—waltzed amid the dish's subtle flavors with an elegant mineral edge.

Next, a morsel of brawny yet tender Monterey abalone: Grilled and garnished with a purée of its liver, roasted garlic aioli, and toasted seaweed, it was set on a dab of egg yolk jam and finished with a smoky sauce made from grilled oysters, dashi and crème fraîche, the remnants of which we mopped up with hunks of scrumptiously yeasty-buttery brioche. Then, in a simple earthenware bowl, beneath a blanket of sunflower petals, we discovered a savory and ever-so-slightly-funky mix of fermented and grilled corn seasoned with black truffle butter and finished with an onion brûlée and corn stock.

The evening's savory act concluded with a grilled fillet of turbot, draped in a veil of tangy jellied carrot vinegar, topped with a scattering of flower petals and nasturtium leaves, and finished with Meyer lemon beurre blanc. Along with the fish, a mesmerizingly yummy 2011 Cuvée Reservée Châteauneuf-du-Pape from Domaine du Pegau, whose intense vanilla-blackberry-eucalyptus aroma persisted until there was nothing more than a purple smudge in the glass.

From this point on, Juan Contreras—Atelier Crenn's pastry chef, and Crenn's close collaborator since the restaurant's opening day—assumed control. Recently, Contreras, who was born in Mexico, has been working with traditional Mexican ingredients in an exploration of Mayan culture, and of his own heritage. He swiftly reoriented the palate with a shot of Nopal Elixir, a slightly sweet, fruity-citrusy blend of lime juice, cucumber, mint, tomatillo, cactus, agave sugar, Hoja Santa (a leafy member of the pepper family), and lulo (a small orange fruit from the nightshade family).

Contreras has a particular gift for creating things that look like other things. A tiny jade Mayan mask, for instance, was in fact a clever simulacrum, made of chilled avocado, lime and white chocolate crémeux. The flavor was subtle—creamy, citrusy, and like many of his desserts, delicately rather than overtly sweet. Similarly captivating, an utterly convincing vanilla bean concocted from cacao butter and vanilla was filled with soursop curd crème anglaise that oozed through the skin of the skinny brown pod at the slightest touch. Alongside the vanilla bean was a tobacco leaf, a real one. Crystallized, and perfumed with vanilla, it melted on the tongue, leaving nothing but the memory of a warm, sweet sensation. // Atelier Crenn, 3127 Fillmore St. (Cow Hollow), ateliercrenn.com