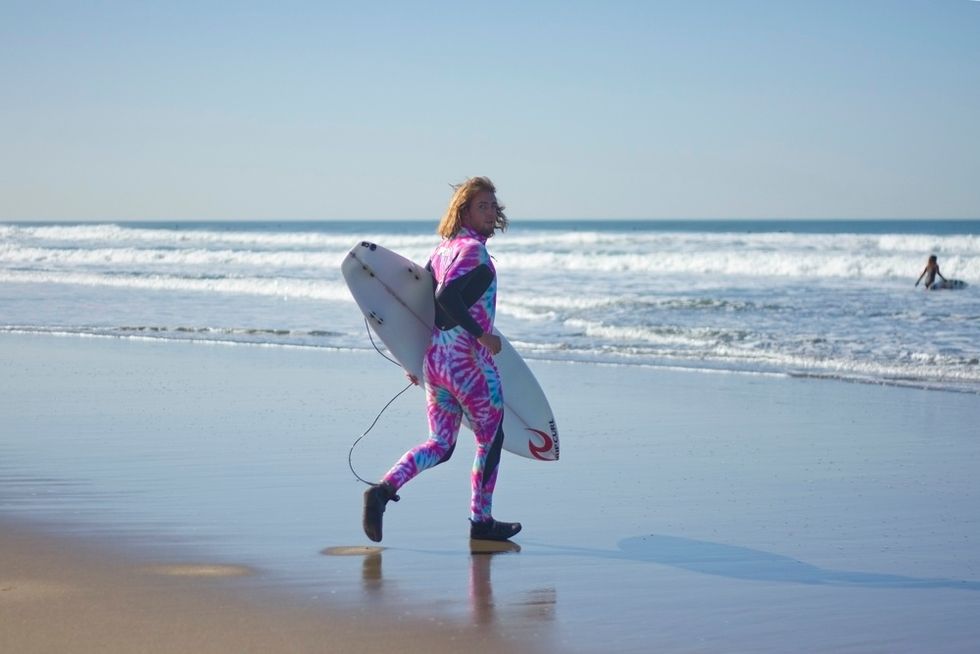 By now you’ve probably heard that there isa surf contest going on at Ocean Beach. And yes, that means that dreamy, blue-eyed Kelly Slater is in town on his quest for his eleventh world title.

But there are other surfers competing, too. Guys you’ve probably have never heard of, like Bede Durbidge and Taylor Knox. But if you’re wondering who to root for, which surfer of the out-of-towners might best embody the spirit of San Francisco, then your man is Matt Wilkinson.

Matt, or “Wilko” as he’s called, is a 23-year old from Copacabana, Australia. He runs a blog called Out 2 Brunch that chronicles his zany antics, with pictures of hot chicks plucking his eyebrows, or his custom-made wetsuits which thematically match each contest location throughout the year—like a cheetah print suit for a contest in South Africa and $100 bills for the competition New York City. He makes off-color surf movies, like a very NSFW video that showcases his surfing prowess as well as his whip cream fetish. Out in the water at Ocean Beach, he’s hard to miss with his tie-dye wetsuit, made by his sponsor Rip Curl.

In other words, we got a guy with a tumblr account who makes off-color, unfiltered comments on Twitter and loves to dress up. Oh, and he was recently arrested in Southern California for public intoxication. Welcome to San Francisco, Wilko, we think you’re going to enjoy your time here.

Wilko is off to a strong start at the Rip Curl Pro Search. He has won his first two heats, including a close Round 3 battle against Taj Burrow, and is down to the final 12 surfers of the contest.

I got to speak to Wilko after his victory over Taj, and wanted to hear what the tie-dye wearing surfer has been up to here in the city.

First off, let’s talk about the surf out there. What do you think of the waves at Ocean Beach?
So far it’s been pumping. I’ve only ever been up here once before, and it was in the summer, so it wasn’t really good. Honestly, I was a little bit skeptical about having the contest here.  But since we’ve been here it’s been absolutely pumping, so I’m psyched.

What have been your favorite places to go to so far in the city?
I’m mostly doing the touristy stuff for now. Yesterday I went to Fisherman’s Wharf and went to some nice restaurants. Last time I was here I went and checked out a Giants game, which was unbelievable. It was the first baseball game that I’ve ever gone to. We were right down in the front where they were warming up, so I got a Wilson shirt, and a big Giants finger. It was great. I think this afternoon we’re going to go to Alcatraz and check that out, which should be pretty cool.


It looks like the waves and weather are going to change soon, and there will probably be some days off from the competition. You have any plans?
None so far, just see what the city has to offer.

Have you been out to any bars yet?
Yea, I went out to a little bar on Halloween night to check it out. There was some pretty weird stuff going on, unlike anything I’ve ever seen before.

What was so weird about it?
What wasn’t weird there? Every single person out was crazy. And I was dressed up and fit right in, so I was stoked.