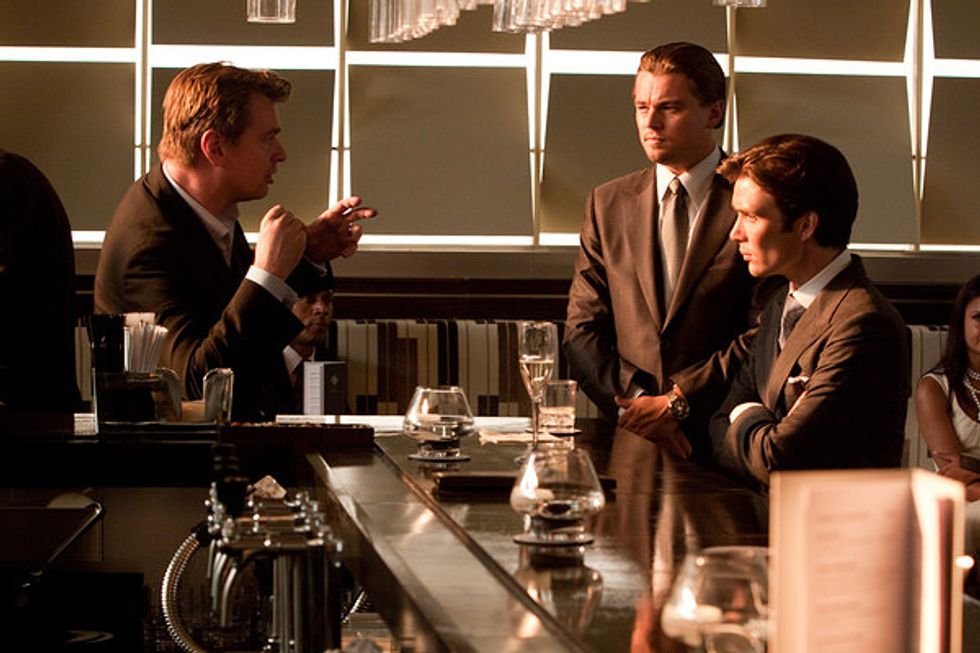 Running Down a Dream: Christopher Nolan and Leonardo DiCaprio on ‘Inception’

Son of an English copywriter and an American flight attendant, director Christopher Nolan split his childhood between London and his U.S. hometown of Chicago, where he would eventually film his career’s biggest hits: Batman Begins (2005) and 2008’s The Dark Knight.

For his latest, the cerebral thriller Inception, Nolan went international again, shooting in locations as far-flung as Paris, Tokyo and Morocco. Yet the most spectacular scenery in Inception, in which a team of tech-savvy thieves extracts valuable secrets from the dreams of their sleeping targets, exists not in the physical universe, but in the mind.

It’s an idea Nolan, 39, has been nurturing for a decade – an adventure set in the subconscious, where the imagination, liberated from the constraints of reality, is free to do what it will.

“The relationship between movies and dreams is something that’s always interested me,” says Nolan, whose wife, Inception producer Emma Thomas, describes her husband as a sound sleeper. “My primary interest in making ‘Inception’ is the notion that the mind, while you’re asleep, can create an entire world that you’re experiencing without ever realizing it. That says a lot about the creative potential of the human mind. It’s fascinating.”


Before immersing themselves in the hallucinatory maze Nolan first envisioned while basking in the success of his challenging 2000 breakthrough, Memento, his cast, including leading man Leonardo DiCaprio, felt it necessary to do their homework – to a point.

“I’m not a big dreamer,” says DiCaprio, 35. “I never have been. I tried to take a traditional approach to my research – I read Freud’s book on dream analysis – but this is Chris Nolan’s dream world. It has its own structure and its own set of rules, which he’s created.

“I think dream psychology depends on the individual – there’s no science that explains all of it. Obviously, there are emotions we suppress during the day and underdeveloped thoughts that our mind fires off as we sleep. When they produce these surreal story structures, we should pay attention.”

Nolan credits DiCaprio with helping him develop the emotional arc of the story, which the director first pitched, after 2002’s Insomnia, as a brilliantly imagined heist – clever enough as a procedural, he says, but difficult to follow. That satisfied neither Nolan nor his star, who worked together to make Inception more accessible.

“If you’re trying to reach an audience, writing something genuine is the way to go,” says Nolan, who prefers that his stories be informed by personal experience rather than research.


“When I first pitched the project, I had the heist thing, and I had the relationship between architecture and [the composition of] dreams. But it took me a long time to find [a way] of emotionally connecting with the story. And that has to happen – you have to take on the story as your own. By the time you get near the end, it starts to feel a little irrelevant where you started from.”

Just because Nolan wanted to make Inception less opaque hardly means he wanted to make it transparent. The secrecy surrounding the movie, which opens Friday, was a marketing choice tailored to his preference for mystery.

“I want to be surprised when the lights go down,” he says. “Obviously we have to sell the movie, and secrecy lends itself to some degree of hype. But I don’t think of it as secrecy – it’s appropriate. Too much is given away too often in movie marketing these days.”

The director acknowledges that Warner Brothers might never have green-lighted Inception, a $200-million movie that wears its intellect on its sleeve, without the prior successes of Batman Begins and The Dark Knight, which earned nearly $1.5 billion at the box office. (Michael Caine, who appears briefly in Inception, recently suggested that a third installment of the Caped Crusader's saga will begin production in April 2011.) Has success changed Nolan’s style?

“It’s not that often that you get to have a large commercial success and then have something you want to do that you can excite people about,” says Nolan. “With the success of The Dark Knight, we were in a position where the studio was prepared to put a lot of faith in us and trust is to do something special. Those opportunities are very rare for filmmakers.

“But for me, the filmmaking approach has always been exactly the same. What I’m doing on the set today is no different from what I did when I was making movies with friends, shooting one day a week for a year. I just watch what happens as I would if I were in the audience. The process is strangely similar no matter how big the movie gets.”