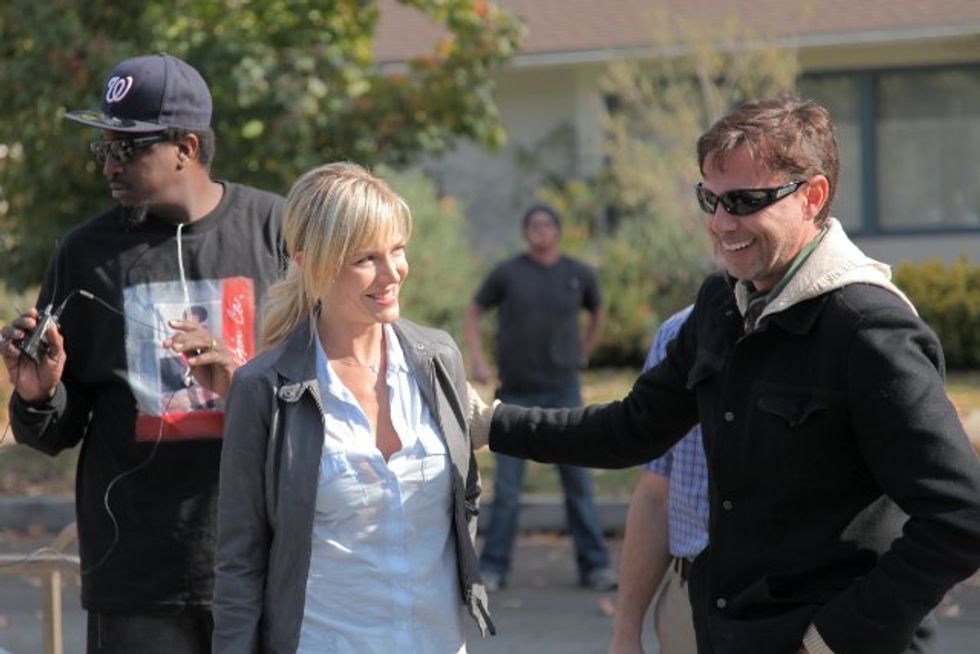 Growing up in San Francisco, armed with a Super 8 camera to document his youthful forays into pyrotechnic mayhem, director Matthew Leutwyler’s journey to Hollywood is more than vaguely reminiscent of the trail blazed by so many innovators – guys with names like Scorsese, Lucas and Spielberg.

“I was always making little movies with my friends and stuff, even when I was at the Town School,” says Leutwyler, 42, whose new drama, Answers to Nothing, opened Friday at the AMC Metreon. “I was 8 or 9, and my brother and a couple friends, Robert and Alexander, we did stupid thing like put a tripod with a camera on it in the middle of our backyard.

“We’d take out our army guys, pour gasoline on them and light them on fire. There wasn’t much story going on back then – I would film anything that entertained us. I was fascinated by Star Wars at the time, like all the kids were, but the movie that really got me thinking about becoming a filmmaker was Chinatown."

Since relocating to Los Angeles after studying at the San Francisco Art Institute, Leutwyler has enjoyed his share of Entourage moments – including randomly playing in a poker game with one of his heroes, Oscar-winning Chinatown screenwriter Robert Towne – but Answers, about the tenuously connected stories of several struggling Angelenos, came from a darker place.

“I was going through a divorce at the time, and I started looking at mistakes I made,” says the director, whose past credits include the wonderfully titled horror-comedy Dead & Breakfast and last year's The River Why. “I took these very specific personality traits I have, all my different issues, and divided them out and started basing fictional characters on them. So not everything you see in the movie is autobiographical.”

That’s a relief. The movie opens with two scenes that, together, form a discomforting portrait of betrayal and marital discontent. In one, a wife (Elizabeth Mitchell, of TV’s Lost) anxiously awaits her husband’s arrival at a fertility clinic. In the other, we find the prospective father-to-be – played by stand-up comic Dane Cook – in bed with another woman.

Further solidifying his reputation as a creep, he collects a sperm sample, for use at the clinic, from his mistress' mouth. “It’s funny watching that scene with audiences on the festival circuit, because you hear some chuckling, maybe some grumbling, but people seem to think it’s amusing,” says Leutwyler. “The minute we cut to Liz in the fertility clinic, the mood changes completely – like, ‘This is kinda fucked up.’

“Dane was worried about that when we started. He didn’t know how his character was going to recover from that, and I understand the concern. I feel horrible about the stuff Dane’s had to put up with, the vitriol people send his way on the Internet. I mean, if you don’t think he’s funny, fine. If you think he’s overpaid and he’s a hack, great. I happen to hate Paris Hilton. I think she’s despicable, especially as a role model for kids. But I’ve never left a nasty comment about her on the Internet.”

Leutwyler calmed his leading man, whom he praises as “humble” and “a hard worker,” by telling him not to worry about the whims of test audiences. “You don’t need them to like you,” he cautioned. And yet, improbably, they did – Cook’s character, whom the director describes as the most accurate depiction of himself on the screen, won over early viewers, women in particular.

Cook won over Leutwyler, too. “He wasn’t exactly the guy we had in mind, but I think he was trying to find a different kind of character, and we decided to take a meeting with him,” the director says. “We took meetings with a few different actors, but his was by far the best. He came in with a lot of ideas, and clearly he understood the character – and the entire movie, for that matter – in a way nobody else did.

“I don’t know if he stole any jokes for his stand-up act. Some say he did, some say he didn’t. I don’t care either way. I once wrote a script that turned out so similar to Dan Brown’s [The Da Vinci Code] that I had to throw the damn thing away. These things happen. But we decided to make [Dane] part of the team. He was going through a dark time of his own – some issues with his half-brother, the death of his father – and he just got it. He was willing to do anything for the part, and you can see that dedication in his performance. So maybe that’s why he won people over.”

Answers to Nothing is now playing at the AMC Metreon. For tickets and showtimes, click here.