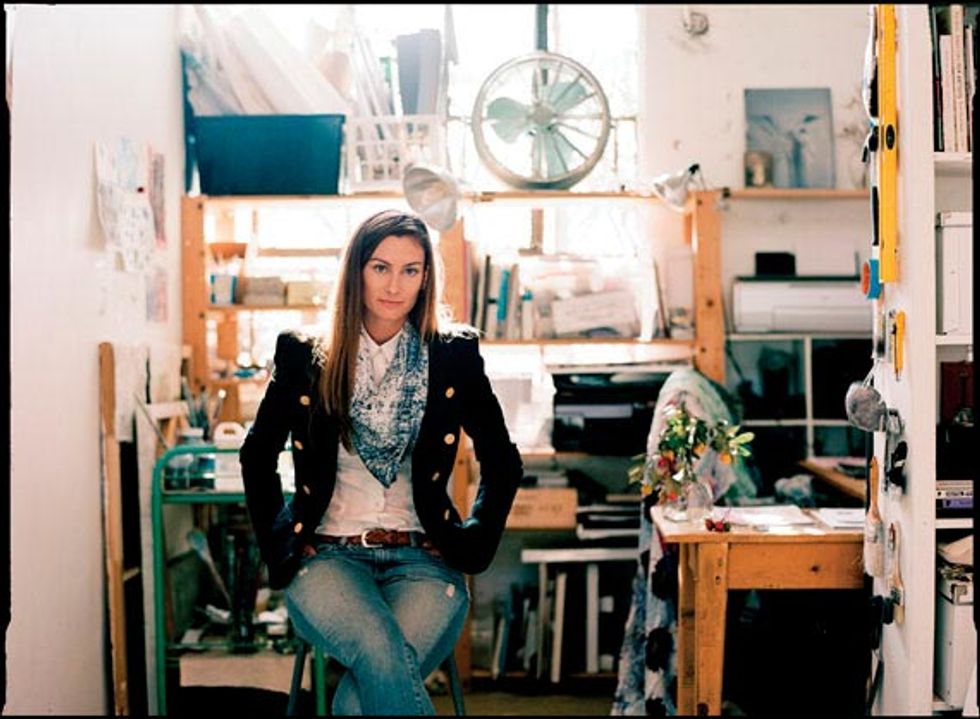 Stevie Howell showed unmistakable signs of an artistic calling beginning in nursery school. For instance, one of her finger paintings fooled a museum bigwig into  believing the colorful composition was the work of a famous artist. But it was a prediction her mother made in 1993 that Howell, now 31, deems gospel. “After I read an article in Elle Decor on textile design, I just had a gut feeling Stevie would be doing that kind of work one day,” explains her mother Linda.

“I always say my mother has a little clairvoyance in her,” says Howell, who studied at the Glasgow School of Art and the Art Institute of Chicago before beginning her career as a painter and photographer. The San Francisco native now works in a shared studio space and gallery called The Compound, where she marries the two disciplines to create bohemian abstractions digitally printed on silk—“usually, mostly, always flower-related,” she says. Howell’s first-ever foray into textile design is a composition she calls Bryony, which emerged from an image she snapped of bouquets at a wedding in Sag Harbor, then manipulated with brushstrokes and PhotoShop to yield a bold ethnic print that’s more Bangkok bazaar than summer-in-the-Hamptons.

“My designs are largely about experimentation and chance,” says Howell, whose influences include photo abstractions à la Gerhard Richter, 1960s psychedelia, and abstract expressionism’s trademark spontaneity. Her mirroring technique, for example, “creates weird, unexpected shapes and creatures in the design.” Its cryptic patterning literally turns repeated shapes upside down (and sideways and diagonally). “My uncle always asks if I’m on acid,” she says.

Howell’s kaleidoscopic masterpieces are making a splash in the design industry. Brooklyn fashion label AmyClaire featured Howell’s Peruvian-inspired patterns in its spring 2012 collection. She also created a custom curtain for Los Angeles home decor boutique, Garde. And bedding, curtains, and pillows, awakened with the artist’s clever interpretations of traditional china patterns and woodblock prints, are coming soon to Anthropologie.
Next month, Howell debuts an eponymous line of wovens and silk scarves, joining a tradition that includes great print masters Dries Van Noten and Alexander McQueen. “The shape of a scarf is a natural canvas,” she says, “but it’s the art that makes a beautiful frame for the face.”