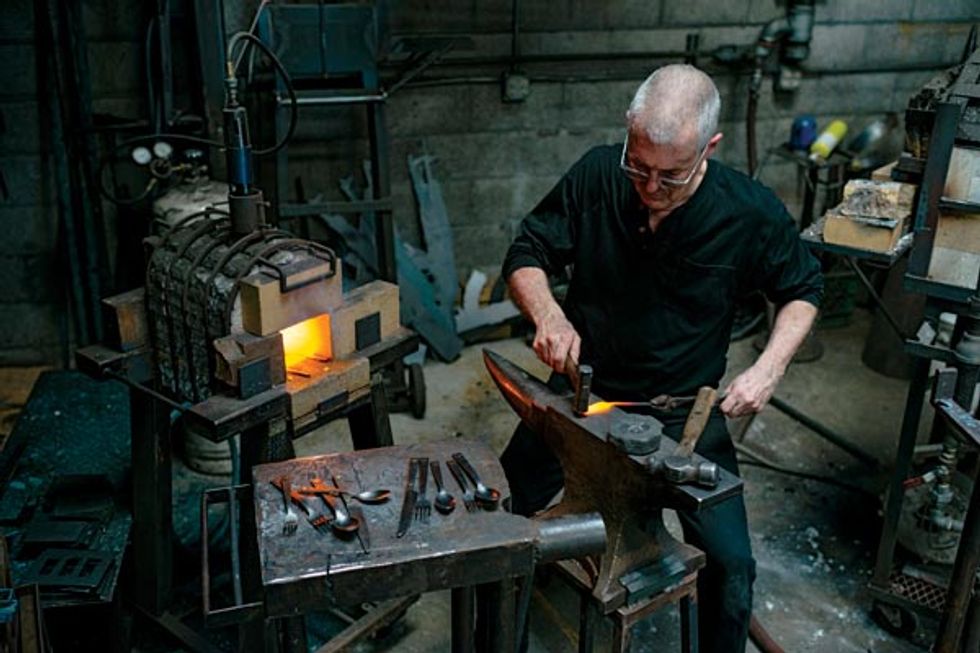 SF's Most Successful Blacksmith Brings Style to Homes Across the Nation

Jefferson Mack is one of the most successful blacksmiths in the United States, and he should be, because this is not his first time at the anvil. In fact, it turns out that he’s been at it for a few hundred years, the last 20 in his high-ceilinged, industrial workshop in San Francisco’s Bayshore district.

“I consulted a mystic and discovered I’d been a blacksmith at least three times in previous lives—I think in Old England and Italy,” he says. But with a thriving business, which includes creating high-end custom commissions and designing stylish flatware for Restoration Hardware (pictured above), Mack may be better in the here and now than he ever was before.

According to Mack, people who believe in reincarnation think you keep coming back to this life until you achieve perfection. Touring his studio, you get the sense that he’s close to the goal. Fantastic pendant lights whose roots lie in the steampunk world of Jules Verne dangle beside AK-47 silhouettes—chandeliers wrought from metal and illuminated by LED lights. On this day, Mack can be found in the back of his workshop beside a fiery forge, using a large mallet to beat a red-hot piece of iron into the shape of a reed. The final product will decorate a custom light fixture done in metal leaves and cattails.

Mack started smithing when he was 17 but took major detours in his work life, including stints as a set designer for rock ’n’ roll bands and as a building contractor. He found his way back to the fire in 1991, when he sold everything to buy his own forge. Today he utilizes all the old metal arts tricks and supplements them with the latest technology. Although his light fixtures run around $5,000 and a custom piece can cost much more, the 20-piece flatware set adorned with brass rivets that he designed for Restoration Hardware can be had for a mere $176. The collection, introduced in 2013, is such a standout that it has been expanded and is now offered in two finishes.

Of this dichotomy, Mack says, “People wonder if I’ve sold out. But it is possible to do what you love—and it’s also possible to work with a big player and get good design out there.”