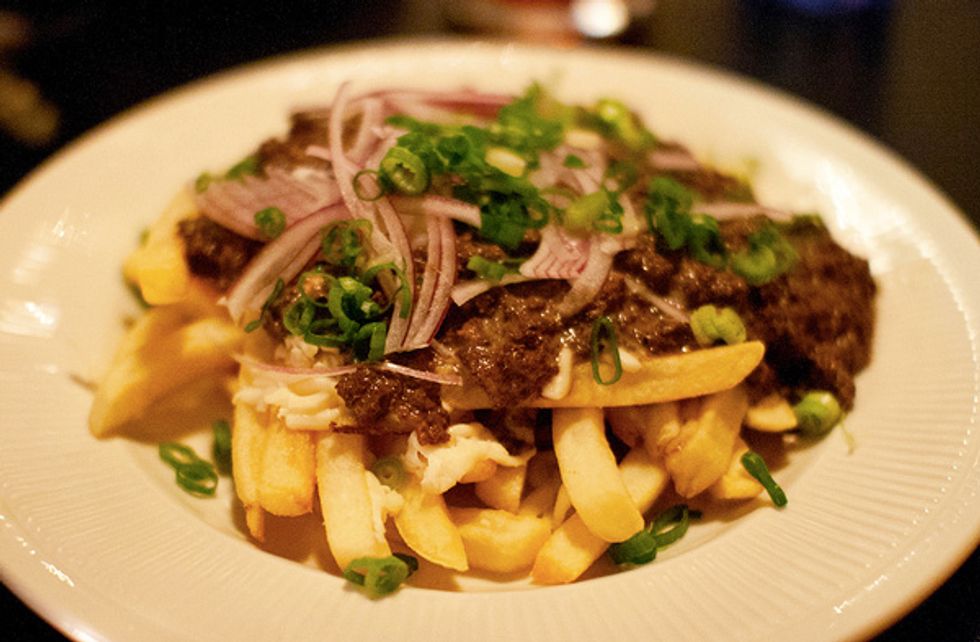 More and more fine drinking establishments around the city have learned that the key to selling that second or third cocktail is giving the customers some fun things to munch on in between. Back in June we talked about the trend of classing up the bar-snack genre, and now we bring you some new dishes that are helping the cocktail-inclined soak up the booze in style.

The newly revamped Fog City (formerly Fog City Diner) already has a greatest-hit dish, and it's these twice-fried French fries topped with the umami-rich Japanese condiment known as furikake -- typically sesame seeds, seaweed, dried fish, and chef Bruce Hill's version includes a generous dose of salt and bonito flakes as well. They're great on their own, with drinks, or as a side dish with his excellent burger. 1300 Battery at the Embarcadero

Among the many delicious antipasti on April Bloomfield's menu at the new Tosca is a totally booze-friendly panini listed as the "bar sandwich." It's a piping hot pressed sandwich oozing with mozzarella, truffle cheese, and prosciutto, and this is the highest class of drunk food there is, in our book. 242 Columbus Avenue

Poutine has been all the rage around the Bay Area the past couple years, and there are great versions to be found at KronnerBurger and Wayfare Tavern. But check out the rich version (pictured above) at James Syhabout's newly opened Rockridge outpost, Box & Bills. It comes topped with dark, intense blood pudding, red onion, scallions, and cheese curds. It'll be one of many things you may mildly regret, but thoroughly enjoy, on this caloric menu. 5912 College Avenue, Oakland

Available as a Wednesday special, until they run out (or until they go on a permanent menu), these delicious homemade pretzels get served warm, and are a terrific, old-school accompaniment to the impressive beer selection at this new downtown beer den. 34 Mason Street

Ham and Cheese Soldiers at The Cavalier

You'll find them on chef Jennifer Puccio's pub-inspired menu in the "Egg & Cheese" section, listed under Hen Egg Hollandaise, which is what they're served with. But these delectable, buttery little snacks are the perfect complement, day or night, to one of the generous Royal G&Ts on the cocktail menu. 360 Jessie Street at 5th

Beef Jerky at The Third Rail

This item is so new that it's not actually available yet (the bar is set to open within the next couple weeks). But be prepared for some jerky awesomeness from Range chef Phil West to accompany the fun and unpretentious new cocktail program by partner Jeff Lyons -- which includes the namesake drink, an addictive twist on the whiskey sour that was a longtime favorite at Range. Jerky options, which will be available for just $2.50 per ounce, include Sweet Meat, Jerk-Spiced, vegetarian (king trumpet mushroom with vadouvan), and a coffee-rubbed, chile-spiced version inspired by Range's popular coffee-rubbed pork shoulder, made with Five Dot Ranch beef. 628 20th Street at Third