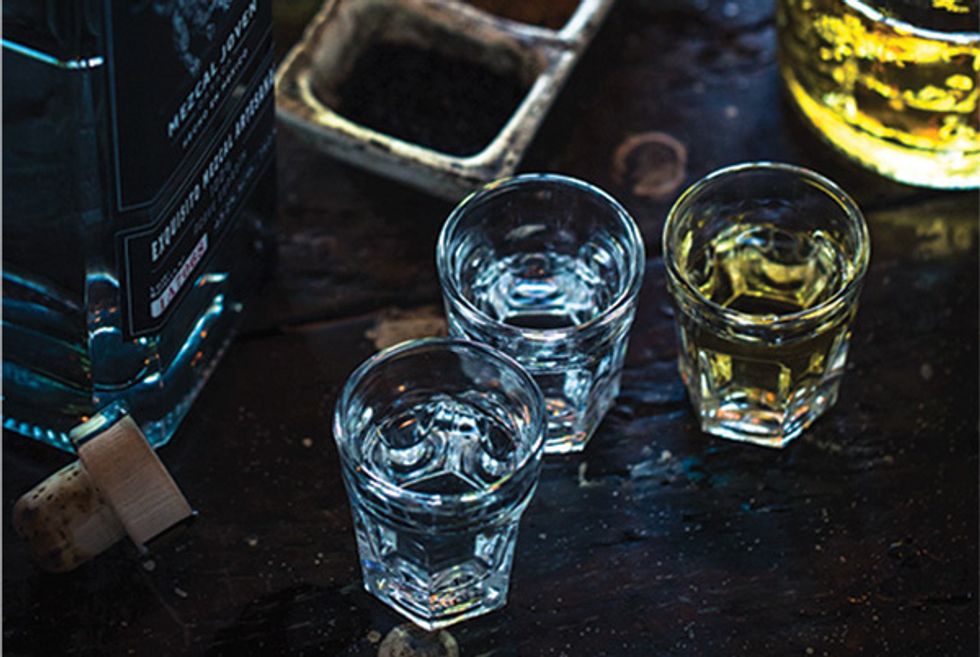 Astute barflies have likely noticed that mezcal has been gaining prominence in Bay Area cocktail spots—the smoky agave drink is often served in the kind of bold concoctions that would put hair on your chest. But lately, we stateside connosseurs have started getting our paws on the good stuff—the small-batch mezcals once kept by family distillers for their personal consumption. Now, we're beginning to appreciate mezcal on its own— unaged, unchilled, and without adornment of salt or lime—just how your abuelo would have wanted it.

If you were to think of mezcal as the slow food movement's answer to tequila, you wouldn't be too far off. While tequila is made from only the widely available blue agave plant and is produced in industrial settings, mezcal is handcrafted at small palenques (distilleries) by mescaleros (sometimes called maestros) in a process that dates back nearly 500 years. About 80 percent of mezcal is made from espadin, a relatively common and easily cultivated species of agave, but it may also be made from dozens of different types of agave, each of which imparts its own unique flavors to the drink—much like how a particular varietal of grape gives a wine its distinctive aroma and taste.

To be a mescalero is a practice in patience: Unlike most spirits that can age to a maximum of 25 or 30 years, such as whisky and rum, some species of agave require more than two decades just to ripen enough to be harvested. In other words, that shot of joven (young) tepextate (a rare wild agave) you tasted recently may have been distilled from agave plants that sprouted the same year Michael Jordan was named the NBA's Rookie of the Year, back when an average two-bedroom apartment in San Francisco rented for about $750 a month. (Winemakers often wax poetic about the impact of terroir upon their grapes, which mature in a single season. Imagine what an agave plant might absorb from a decade or more exposure to local environmental elements.)

Since most farmers don’t have a lot of incentive to cultivate species that take two or three decades to mature, most plant espadin and or another agave species called tobala, which can generally be ready to harvest within eight to 10 years. The most exotic mezcals, however, are made from wild agaves such as tepextate, and many of these are foraged, sometimes to the point of over-harvesting—to meet the demands of American mezcal collectors, some wild agave species are already endangered.

We're all for sipping exotic varietals responsibly, so we recommend sampling from producers with robust reforestation programs, such as Pierde Almas, Wahaka Mezcal, El Buho, Don Amado, and Mezcal Tosba. But if you're having a mezcal cocktail, stick to a cultivated agave such as espadin, and reserve the wild stuff for sipping.

Here's where to find the best mezcal in the Bay Area:

Loló.  This eclectic Mission restaurant treats its patrons to small bites of Jaliscan-Californian cuisine. Get there early when the bartenders have more time to help pair your food with a custom mezcal flight.  //  974 Valencia St. (Mission), lolosf.com

Calavera.  Located at the Hive in Oakland, this large cantina serves reimagined versions of traditional dishes from Oaxaca, the Yucatan, and Chihuahua. Calvera has 60 mezcals on the menu; flights available.  //  2337 Broadway St. (Oakland), calaveraoakland.com

Nopalito.  The food is sustainable and organic, meaning you can feel good about that extra flight of mezcal. Nopalito has a respectable menu of 20-plus mezcals at both locations.  //  Multiple locations, nopalitosf.com

Healthy Sprits.  Although quality mezcals are showing up on more store shelves, Healthy Sprits is in a class by itself. Their Agave Spirits Manager, Eli Rodriguez, has solid connections in Oaxaca and is scoring rare, small-batch sprits. Join their Agave Club to get 10 percent off and a select bottle each month.  //  Multiple locations, healthyspiritssf.com