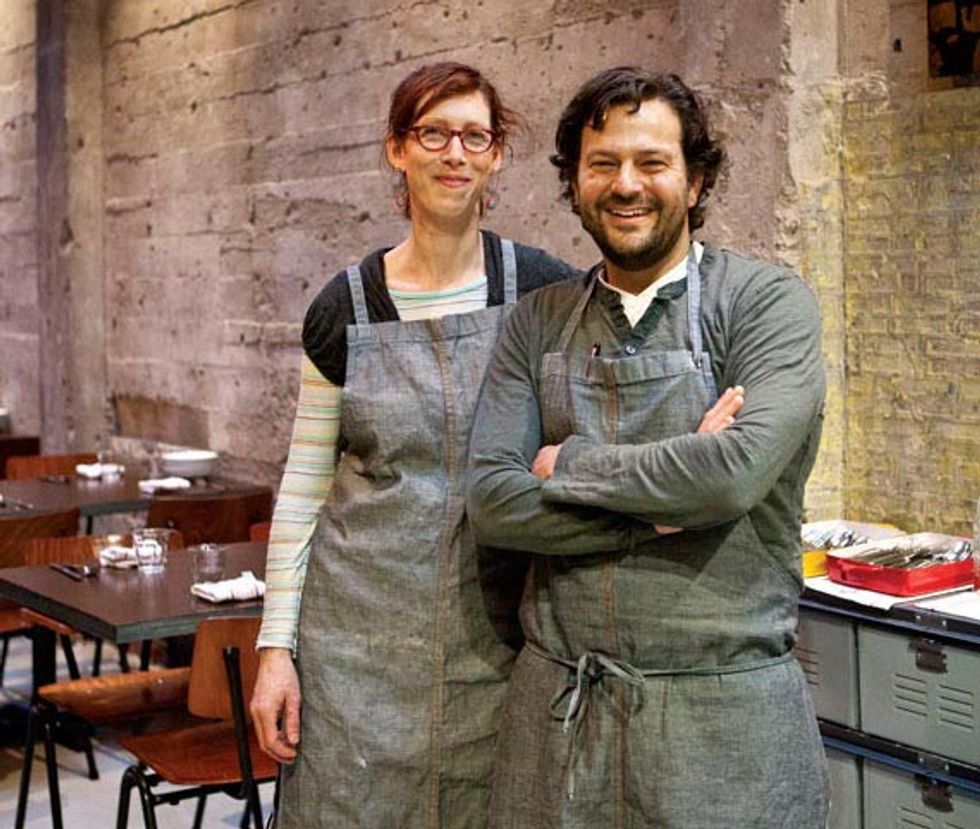 To get into the minds of chef Stuart Brioza and pastry chef Nicole Krasinski, start with the name of their two-month-old restaurant, State Bird Provisions. Brioza pays homage to the delicious little bird (a quail for those Californians who slept through fourth grade) by frying it up and serving it with a tart-sweet mess of onion jam, which he deems “the provisions.” It’s a little twisted—in a good way.

Expecting the unexpected is the best way to approach this new addition to Fillmore Street, wedged in a narrow space amongst the funky mix of Asian restaurants and live jazz clubs. Yoshi’s is just down the street. Though this part of the city has yet to make itself a dining destination, Hapa Ramen will be coming in next door to State Bird soon, giving the neighborhood more pull.

Brioza and Krasinski met 17 years ago in college and married in 2008. Their last tandem restaurant gig was a celebrated five-year tenure at Rubicon before the Financial District institution closed its doors. At this point, the couple’s quirky food sensibilities appear to have become one. To start, the service here is not the norm. The restaurant itself greets you with a long, open kitchen that leads to a tiny dining room lined with walls of pegboard, where servers walk the aisles carrying trays or rolling carts of food, dim sum-style. (It can be a little disarming to dine this way, but when this article went to press, they were still working out the kinks.) One thing is certain—the food, which changes up weekly, is far more heady than a shrimp dumpling. It’s a true culture clash: A little bowl of Thai snapper crudo tossed with quinoa, an aioli seasoned with bonito and rosemary oil, and poached chrysanthemum leaves sounds odd, but the dish is bright, balanced, healthy, and delicious.

Following that, the cart might roll by with a little bowl of potato chips with horseradish crème fraîche and trout eggs. Snag it. Also get the beef tongue pastrami sandwich served with a dressing of melted bone marrow braced with vinegar, shallots, and pink peppercorns. Next to it is a dollop of sweet-sour beet puree—almost a modern-day ketchup. Glazed pork ribs with togarashi are tangy and placed on top of a pile of spigarello, an Italian green.

Krasinski’s desserts aren’t beauties to look at—but to taste them is to develop a new crush. A little glass of peanut muscovado milk paired with hazelnut linzer cookies is as addictive as a buckwheat bao—a massive, chewy profiterole served with huckleberry sauce and what she calls lime cloud cream. “I never learned the rules,” says Krasinski, who is not formally trained. “So I do what tastes good to me.” Clearly, Brioza shares this sentiment—one that seems like a smart rule to cook by.