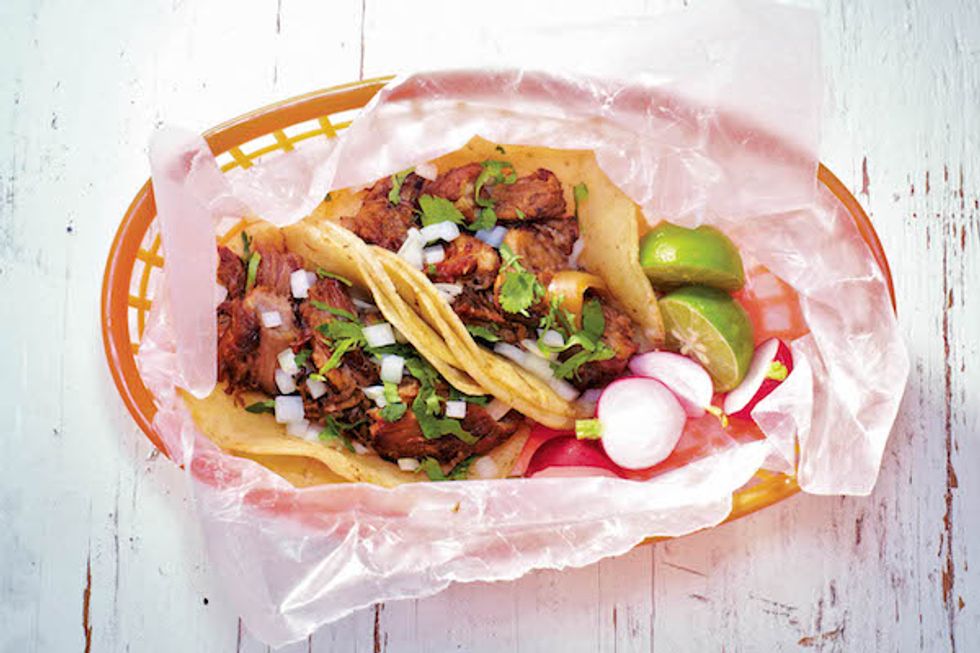 The 5 Best Tacos In the Mission

You already know that tacos are your favorite food in the whole world, but did you know that tacos derive their name from explosives used by silver miners in Mexico in the late 1800s?

The miners wrapped paper around gunpowder (which looked similar to taquitos in practice), and referred to the explosives as "tacos." Fast-forward a few years, and Mexico City taco stands started selling a variety of steamed, tortilla-wrapped meats, originally referred to as tacos de minero, and later shortened to just tacos.

And because we just can’t taco’ bout them enough, here are our favorites in the Mission.

We’re just going to say it right now: El Gallo Giro Taco Truck has the best carnitas in San Francisco. They start by salting the pork leg before slowly braising it in a traditional copper vessel until tender. The carnitas is then fried on the plancha upon order so that the outsides achieve a crispy crunch while the insides remain juicy, slightly fatty, and oh so tender. Top with the spicy tomatillo/arbol salsa for a kick, and bite on sliced red radishes inbetween to cool it all down. It’s sublime. // 969 Treat Ave.

La Taqueria needs no introduction. The plaques that line the walls, the awards, the lines—they're all there for good reason. Obviously, the burritos were already named the best in America, but we're also fans of the carne asada super taco dorado. Juicy strips of steak are housed between two tortillas—one soft, one fried golden to a crisp (the dorado part) with cheese in between. The whole thing is then topped with crema, perfectly green guacamole, fresh pico de gallo, and a spicy salsa verde. It's a taco indulgence. Protip: hold on the beans, when you’ve got so much going on you simply don’t need it. // 2889 Mission St

A good fish taco can be difficult to pull off, but Tacolicious does it just right. The taco chain beer batters fresh, large chunks of rock cod before frying them to perfection: crunchy on the outside, whilst simultaneously steamy and flakey on the inside. After warming up the corn tortillas (which Tacolicious gets delivered daily from nearby La Palma Mexicatessen), a cumin-crema is applied, melting into the tortilla like butter. It’s a beautiful thing. Cold crunchy cabbage slaw dressed simply in lime and salt tops it all off and lends your tongue something cool to nibble on. It is everything. // 741 Valencia St, tacolicious.com

There are so many good things about this taco, it's hard to know where to begin. To start, you order it from a stand located inside a Mexican carniceria that’s been around for over 55 years (Belmar was practicing whole animal butchery way before it became trendy). To make the cecina, thin slices of eye of the round are salted for three nights. The tortillas de mano do not dissapoint: Belmar sources the masa from La Tapatia in South San Francisco, whose owners originally founded La Palma Mexicatessan in the '50s. There’s a taco bar where you can add your own desired taccouterments (see what we did there?) and a bit of onion, cilantro, salsa, and a touch of lime are all you need to complete the meal. Warning: the salsa roja has a creeping heat from the habaneros. // 2989 24th St

There are many meats to choose from at Taqueria Vallarta, but the pollo asada is the best. Chicken thigh and breast are marinated in vinegar, onions, garlic, and salt and then flame grilled a la parilla for a nice smokey, charred taste. The juicy bits of chicken are best paired with the salsa verde, made from fresh tomatillos, jalapenos, cilantro, and lime. Make sure to ask for a side of sweet grilled onions, too. // 3033 24th St.