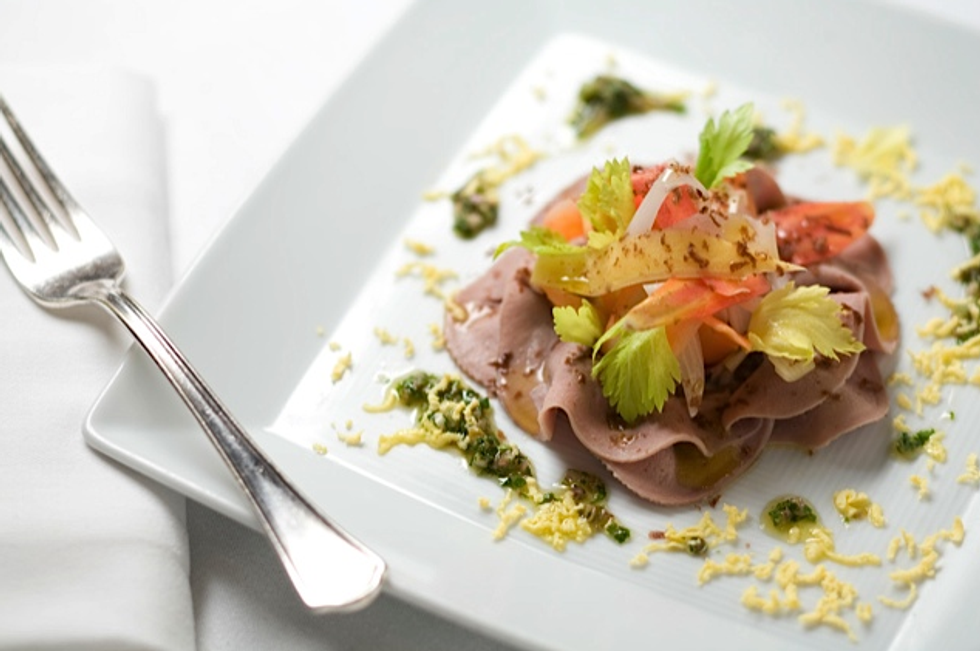 Tongue Sticks Out On Menus Across SF

Long a staple of izakayas and taquerias in San Francisco, tongue meat has started to break ethnic barriers, slipping its way onto California-influenced menus of every stripe. Chefs adore its flavor and its texture. Diners fall into one or two camps: "Why not?" or just "Why?"  Love it or hate it, menu sightings of animal tongue are becoming almost common at popular restaurants around town. Over the course of interviewing several chefs about it, descriptors like "melt in your mouth," "unctuous" and "delicate" were each dropped on several occasions.  Naysayers, are you ready to be convinced? Take a look at what chefs are doing with it around town these days. Maybe it'll get you to watch your mouth.

Hog & Rocks chef and owner Scott Youkilis puts braised, diced corned beef tongue in the onion and pepper stuffing for his potato skins. "People are excited to try an alternative potato skin topping," he says. "It's one of our most popular dishes."

The Dogpatch's Kitchenette features slow cooked beef tongue pastrami on a sandwich made with rye bread and housemade wine mustard. Chef Douglas Monsalud says tongue has limited appeal for their regulars, so it's not exactly a menu staple. "When someone bites into a well prepared tongue dish, though, they usually instantly like it," he says. "In the end, however, if we run a tongue sandwich side by side with a fried chicken sandwich there's no competition."

A16 uses beef tongue in ragu, terrine and a whole lot more. Chef David Taylor says the key to selling it is pairing the meat with appealing ingredients like their housemade Meyer lemon salsa verde. "When we have this on the menu it sells out quickly," says Taylor.

At Local: Mission Eatery, chef Jacob Des Voignes makes corned beef tongue with cabbage slaw and pickles for lunch, pickled tongue with chicories and gribiche for dinner. "It's not as popular as the halibut," he says. "But it holds its own."

Nob Hill's upper crust have been digging into Acquerello Chef de Cuisine Mark Pensa's grilled lamb tongue with celery, salsa verde and Gaeta olive oil for about a year now. "It's what I call a 'sleeper,'" says executive chef-owner Suzette Gresham. "Something diners have a preconceived idea about it, but it delivers a fabulous, deliciously different-than-they-expected experience." Suzette things the meat's lack of another name option is its biggest menu stumbling block: "Lots of people love sweetbreads," she says. "Would they order it if 'thymus gland' was written on the menu? Doubt it.

Anyone have an idea for what tongue could be called to make it sound more appealing, a la sweetbreads? Leave it in the comments. Or if you want to share your favorite tongue dish, that's fine too.