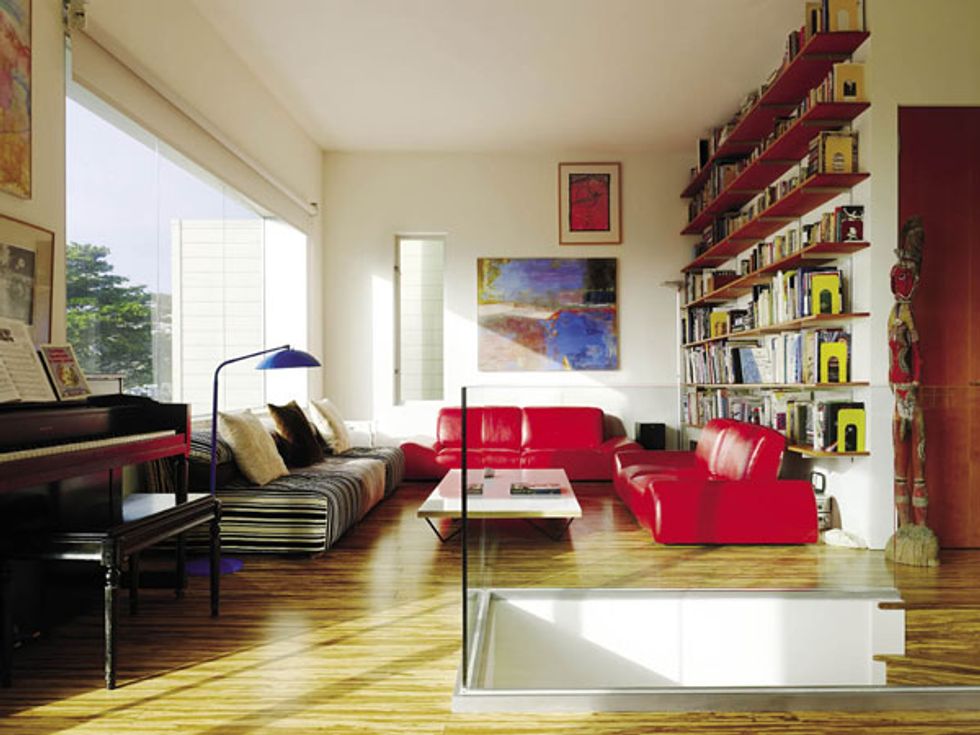 Artists Andy Martin and Xiao-Yen Wang never cared much about views until they moved to SF and transformed a run-down Victorian in Corona Heights into a glass nest from which to take in the urban panorama.

When illustrator Andy Martin and filmmaker Xiao-Yen Wang bought their Victorian at the crest of Corona Heights in 2007, it was grungy and crumbling with dry rot. From the street, it looked like a funky mashup of more than 100 years of shoddy renovations. But once they climbed through the trap door to the roof, they saw that the 1880s three-story duplex offered something else—namely, an uninterrupted view that stretched from Sutro Tower and Liberty Hill to the Bay Bridge and downtown.

Martin—a hobby woodworker and collector of found objects— didn’t like the idea of tearing down the house and starting over completely, but Wang was eager to reinvent the interior as a vast, light-filled live-work space. “The old building was sort of a hodgepodge, like a strung-together New Orleans house. I actually liked the way it used to look,” says Martin, who up until that point lived with Wang and their daughter Yenny (pictured below) in a small home in the East Bay. “This house is situated right in the center of things, and in the morning, it’s especially nice with the fog and haze. It’s quite the sight.”

To help them make the most of their hilltop location and meld the couple’s sensibilities, their realtor pointed them in the direction of Craig Steely, an architect with a studio in the neighborhood. His suggestions were swift and dramatic. They included gutting the interior, adding 24 solar panels, skylights, and a sod roof garden with irrigation, and building a fourth floor in the form of a frameless glass penthouse.

The entire structure is supported by a steel exoskeleton, which also served as a seismic upgrade to the existing building. The steel beams, from which the penthouse now hangs, also support two galvanized steel decks that wrap around the building’s facade, which was in desperate need of a facelift. “The panoramic view is so massive. Segmenting it gives it a human scale. The exoskeleton creates frames for the vistas,” says Steely.

“During our early conversations, Andy expressed an interest in reusing the existing redwood framing that would come out of the part of the building that was going to be demolished. We were excited and began designing options for applying it.” While Steely got to work, Martin spent several months disassembling the redwood walls—inside of which he found odds and ends, such as a business card from 1894. He carefully removed nails from the wood and sorted the pieces according to quality until he had a 10-foot stack of boards. Finally, Steely cut the redwood into five different sizes with a table saw, and he and Martin artfully arranged the boards and attached them to a waterproof membrane on the front face of the building, where there was once stucco. “We refer to his recycling project as honest sustainability,” says Steely. “It requires lots of sweat and time, but it’s ultimately more satisfying than just replacing an obsolete item with something new and shiny.”

The redwood’s random pattern also amplifies the changing shadows on the wall throughout the day as the sun rises from the bay and finally dips behind Twin Peaks, a site Martin often takes in from his desk on the glass fourth floor. “There are a lot of spectacular views in San Francisco,” says Martin. “But I like the view to the south from up here the best.”

Steely also decided to save the home’s side and back exterior, painting the Victorian siding and ornate scrolls a nearly neon green that keeps things contemporary next to the old redwood face. Inside, Martin removed the dark oak floors and switched them out for blond and chestnut-colored bamboo planks that Wang insisted on. The second floor above the garage was finished with minimalist white matte walls and sliding glass doors. Beyond the doors, a glass-railing-lined steel deck lets even more light into a work studio Martin and Wang share.

The third floor houses the main living area, kitchen, bedrooms, and bathrooms with new dual-glazed windows—some of them custom-designed by Steely at an angle or to wrap around corners that reveal an inches-wide glance toward downtown. “During construction, certain lines became important to us,” says Steely. “We modified the portions of the windows and openings accordingly to accentuate the view.” Steely also installed a glass staircase to the penthouse, Douglas fir doors, aluminum cabinetry, a large kitchen island, and bathroom tile and fixtures that Wang purchased in China’s warehouse furniture markets and had transported to the U.S. in a shipping container.

In the master bedroom, an oversized poster of Wang’s 1995 film The Monkey Kid adds color to the otherwise bare space. Balancing out his wife’s love of clean lines and modern, low-slung furniture, Martin brought his grandparents’ antique dressers into the bedroom, where a massive window looks out on the back of Corona Hill. “It’s actually quite private up here,” he says. “The trees in the back are like a curtain, and I admire how the window continues around the corner so you get the view of downtown or a look down onto the garden.” In their daughter’s room, Martin installed bookshelves from his parents’ home in Marin. And out back in the garden, he created a patio divider using posts from their old deck, as well as new foliage and a collection of bells that once hung in their previous house.

Where the couple’s two styles meet best is in the fourth-floor addition, where Wang’s mod fiberglass chair from Beijing, Martin’s handmade furniture, and an antique rug mix and match the new and the old perfectly. Adding warmth to the space are red cedar boards that line the walls, arranged to look like they continue up along the ceiling seamlessly. But the real drama happens at the top of the glass staircase that leads to the penthouse. The first thing you notice is a narrow window that perfectly frames Sutro Tower— a last-minute addition by Steely. Outside of the custom-made windows that give the room its glass-pod look is the sod roof (planted with natives, succulents, and even strawberries) and the solar panels that power Wang and Martin’s home.

“I’m interested in experimenting with ways to connect with the view more than just visually,” says Steely. “The structural frames, overhangs, decks, and the planted roof create a third zone, an interstitial space between the interior and the city.”