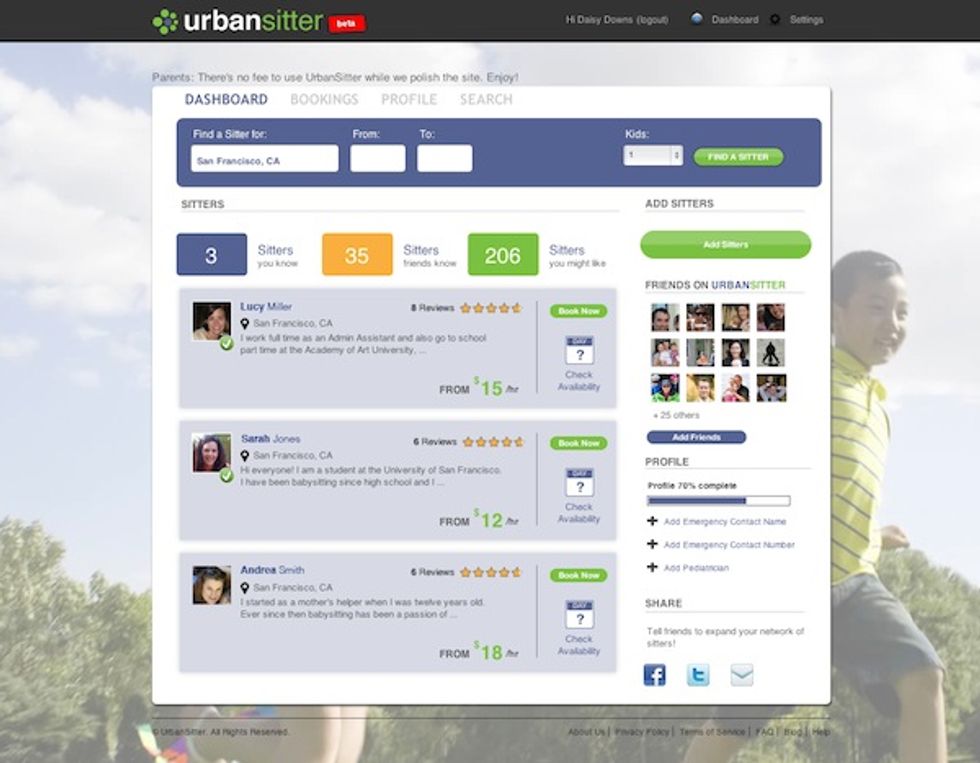 As we figure out how to meet more and more of our offline needs in online marketplaces, one key issue always arises -- trust. How do we know we can trust the people we meet online?

And if this is an issue with sharing or exchanging things, like our apartments (Airbnb), cars (Getaround), and services (Zaarly), it's even more the case with the decisions about which people will take care of our kids.

San Francisco-based UrbanSitter has emerged over the past six months to help parents and babysitters meet up. It starts with Facebook Connect.

“The number one thing parents are looking for in a babysitter is trust,” says company co-founder Lynn Perkins, who is also the mother of twin toddlers. “The number one thing for the sitters, who tend to be young women, aged 21-25, is feeling safe in the family’s home.”

Leveraging people’s social graph via Facebook significantly enhances the comfort level on both sides, Perkins explains, which also is proving to be true across the many online marketplaces.

The anonymous web can still be a dangerous place, but reputation-based exchanges of good and services helps the cream to rise. In addition to verifying people’s age (they have to be 18) and identity, and importing their social graph, UrbanSitter uses a third party to conduct background checks.

From the parents’ perspective, being able to read a sitter’s reviews, and see any social connections or affiliations you may already have with other families (s)he has worked for matters – a lot.

Because when it comes to finding babysitters, parents have always relied on each other to a great extent. Location matters a lot, too, finding someone in your neighborhood makes everything so much easier.

UrbanSitter factors in all of these things when helping parents and sitters connect.

“When we started we only had 40 sitters and 40 parents in San Francisco,” says Perkins. “But now we’re up to roughly 1800 sitters and 2,000 parents in the greater Bay Area.” (The service is active in the East Bay, Marin, and the peninsula.)

“What we hear back from the sitters is that they love us,” says Perkins. The sitters are able not only to respond to new work opportunities as they arise, but also – once they’re established – to set parameters as to when and where they are available.

It all can be handled online.

The service is free to babysitters – they keep every dollar they earn. Parents will be charged a small commission (10-15 percent) in the future. One upcoming feature Perkins is excited about is an online payment solution, because the most awkward moment for both parents and sitters turns out typically to be when it’s time to make the payment.

Parents often have to stop at an ATM to get cash, and sitters do not necessarily want to go out, often at night, with a bunch of money in their pocketbook.

“It’s proving to be incredibly viral,” says Perkins. And also successful by another metric. Over 75 percent of those who have tried the service once have chosen to use it again.