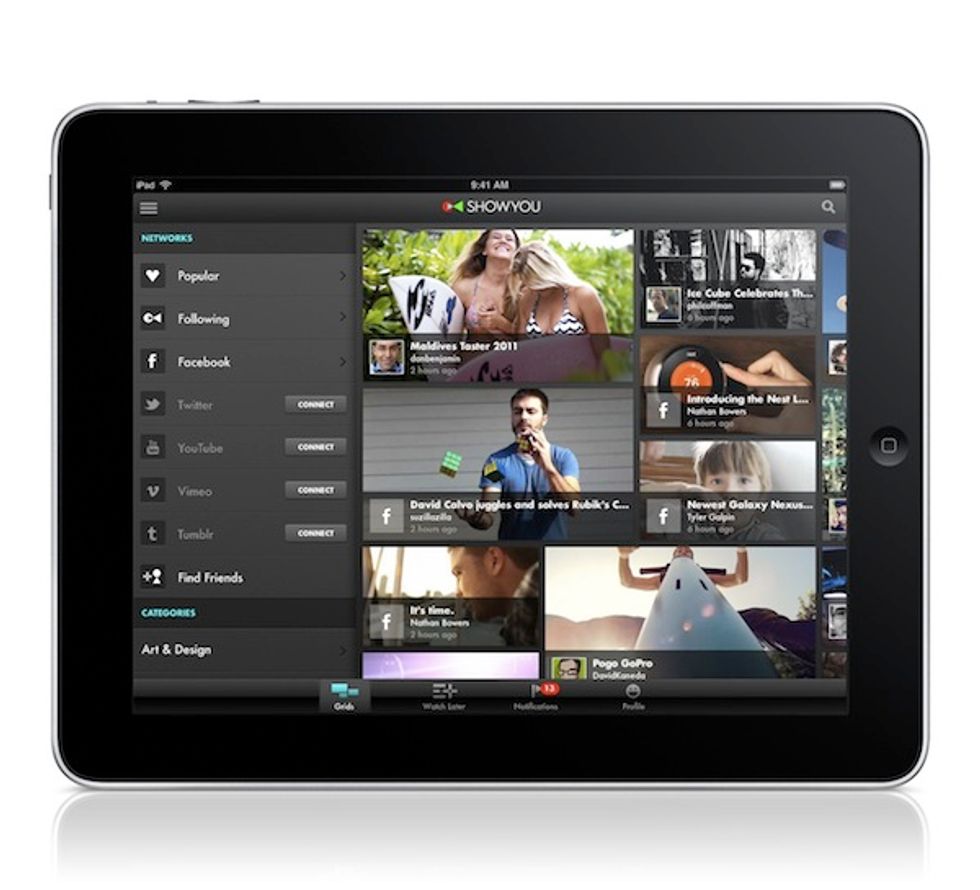 Check this out: Sixty hours of video are uploaded to YouTube every minute, which translates to an hour of video every second.

Think about that. No single human being is ever going to watch all of these clips of "Charlie Bit My Finger," not to mention kittens, music performances and product demos. We need curators.

That’s where the San Francisco startup Showyou comes in, with its impressive social discovery app on the iPad. With a grid-like interface and an intuitive navigation slide, Showyou optimizes a user’s need to discover, save, watch and share videos from sites like YouTube, Vimeo, etc., on touch devices including the iPhone, iPad, iPod Touch and Kindle Fire.

The company behind the app is Remixation, whose co-founder and CEO, Mark Hall, explained to me how Showyou parses the videos linked to by users on Facebook and Twitter to identify which ones are best, as determined by people, not algorithms.

Of some 5,000,000 videos retrieved from its users’ Facebook and Twitter feeds every day, Showyou selects from 100-250,000 new videos to its database, Hall said. “A lot of them are duplicates, so the list narrows down pretty quickly to the top-shared videos.”

Hall says of the 27 million videos in Showyou's search index to date, since it launched last April, the average person watches eight videos per session, spending about 35-40 minutes in the process. They watch them at night and on weekends, not so much during the workday.

While studying this user data, Hall and his team discovered something quite intriguing – that although people share many more videos on Facebook, the social network behemoth does not drive viewing of those videos anywhere near as effectively as Twitter. (Pay attention, social media addicts.)

“Even though they share only half as many videos on Twitter as on Facebook, people actually view ten times as many videos from Twitter’s links as from Facebook’s,” Hall explained. “At least when it comes to video, Twitter really is the better link-sharing service.”

Showyou recently upgraded its app’s taxonomy to include ten categories of videos (like music, news, sports, comedy, etc., and my personal favorite, “viral.”) As you scroll through the highly visual grid, you tap into any movie to watch, share, save, or check out comments others are making on social media sites about that particular video.

“The key to finding really good stuff is other people,” notes Hall. “It’s your friends and the friends of your friends.”

Showyou enables your ability to follow people whose tastes in video are similar to yours; in this way as with all social media it helps people meet new friends via shared interests and values.

There is also a feature that lets you see the top trending video hash tags; a recent example Hall noticed on Showyou was #Jan25, which turned out to be a large spike in videos celebrating the beginning of the uprisings in Tahrir Square one year ago.

Each grid on the interface houses a separate channel; thus you have The Daily Show, The Colbert Report, BBC and other professional channels along with more customized offerings from your fellow curators.

So far, the service’s users are evenly split between the U.S. and overseas, tracking closely with iPad distribution worldwide.

The iPhone app is less visual and scrolls as a reverse chronological feed. Many users seem to use the iPhone app to discover videos they then save to watch on other, larger devices later, including Apple TV, Hall says.

Showyou, which is free, doesn’t currently contain ads but Hall expects that may change in the future when less disruptive advertising becomes available.

Sponsored channels are also a likely source of future revenue, he told me.