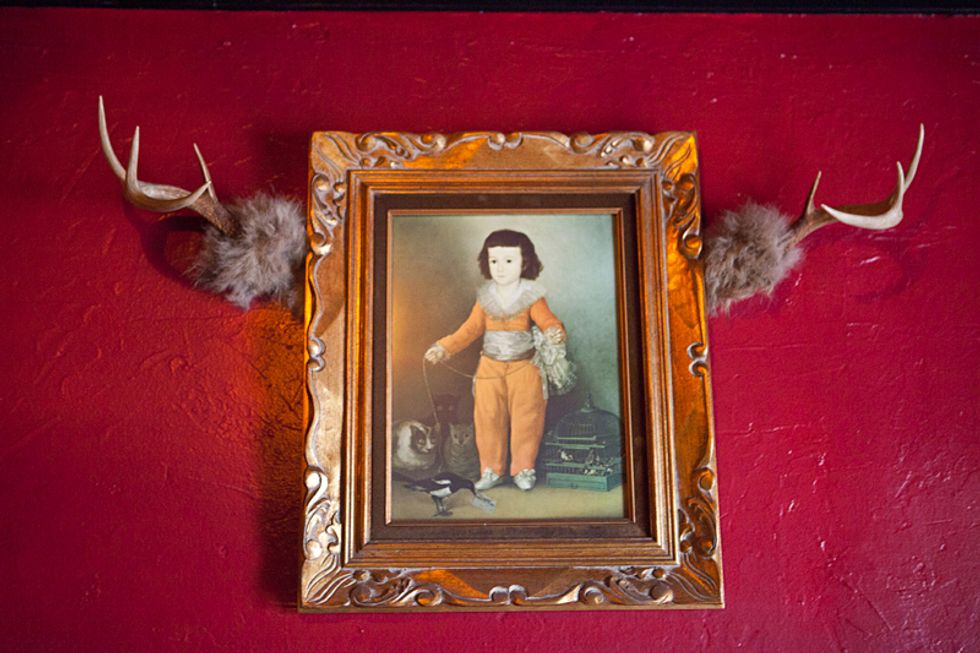 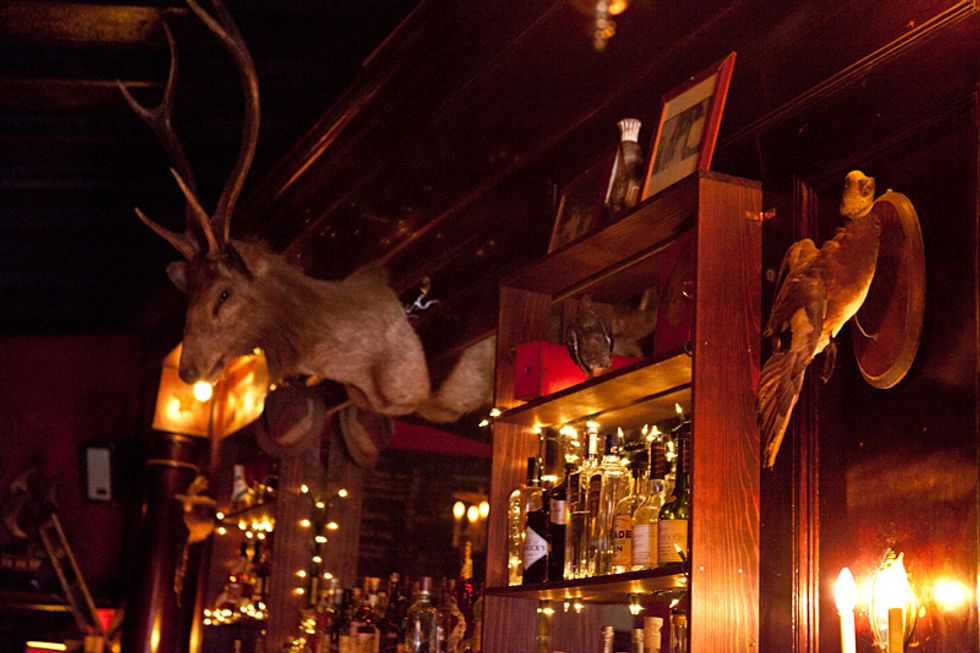 Previous Next
A giant stag's head sits above the bar. 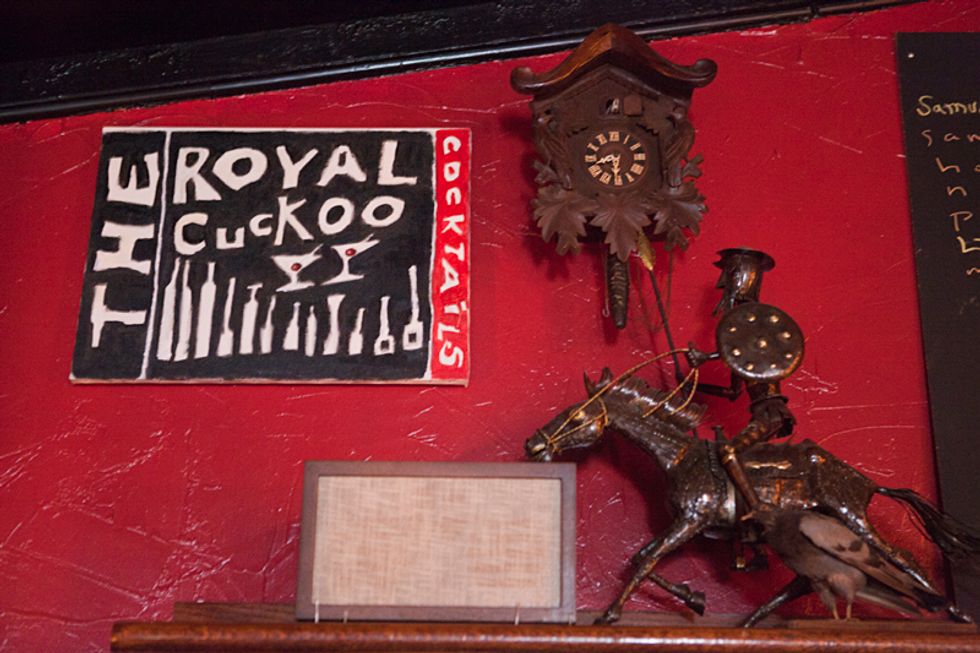 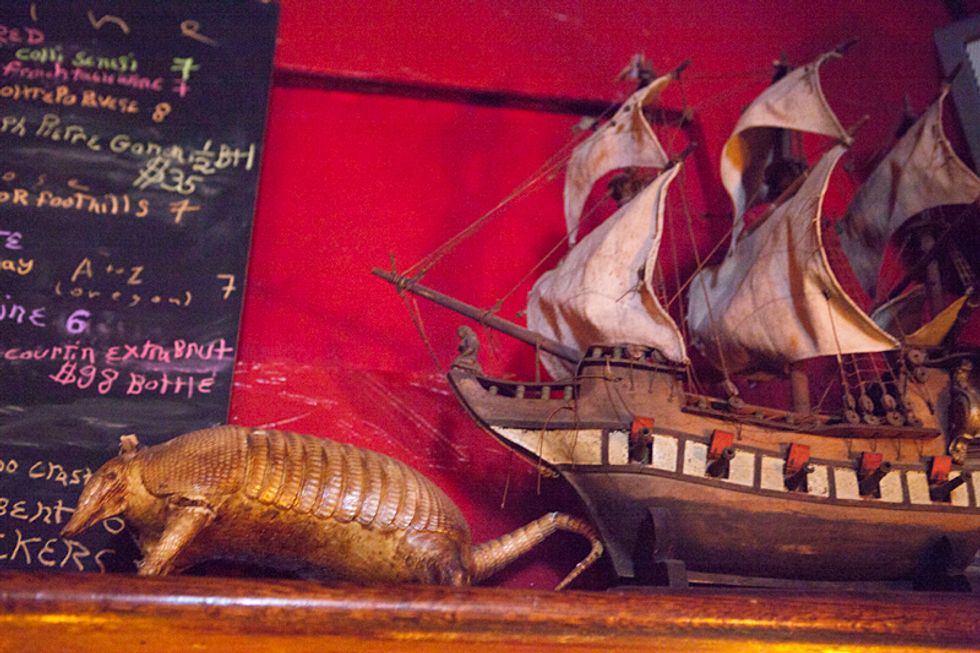 Previous Next
An armadillo and model ship sit next to the cocktail menu. 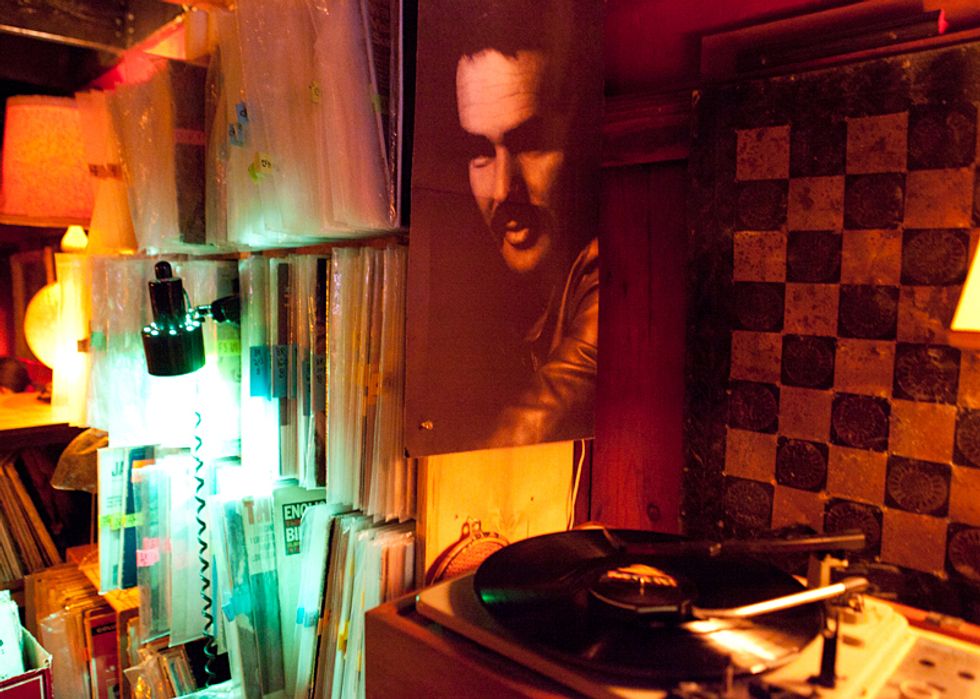 Previous Next
A poster of Burt Reynolds found in an old record sleeve watches over the turntable. 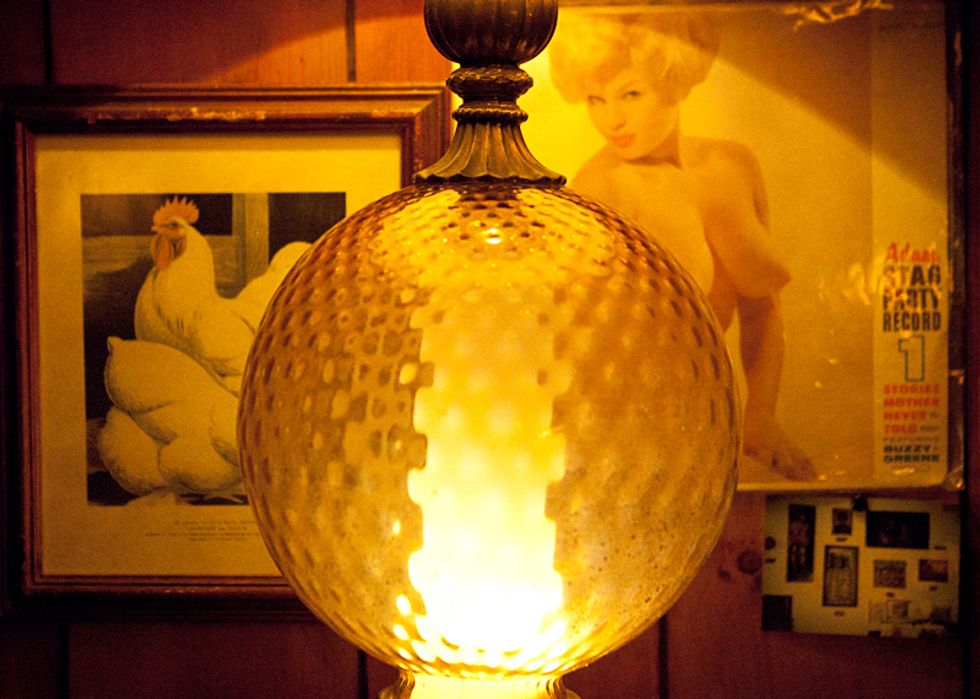 Previous Next
An old novelty record sleeve sits next to a framed photo of chickens. 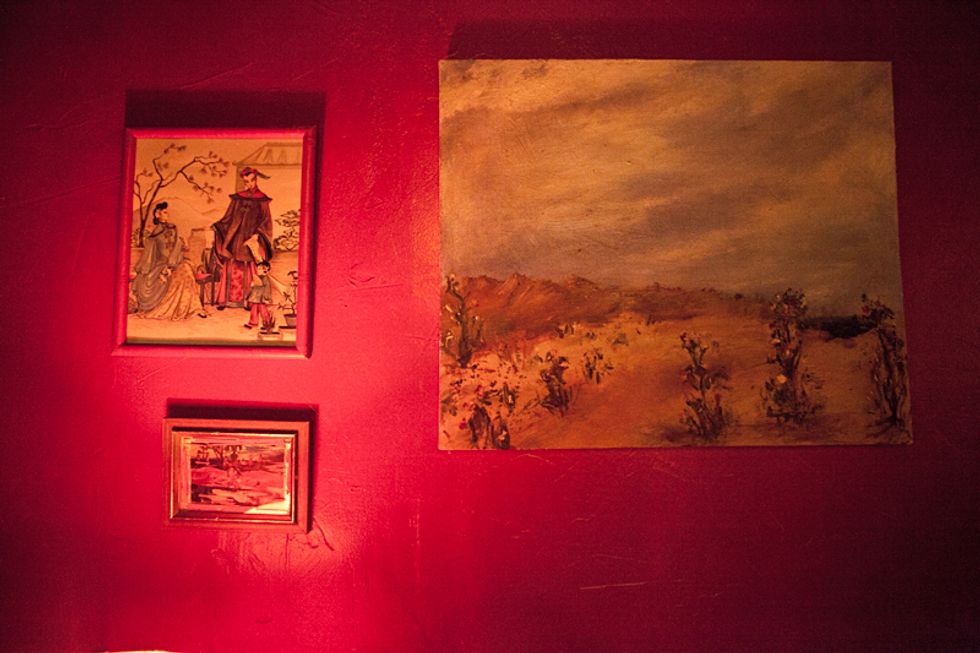 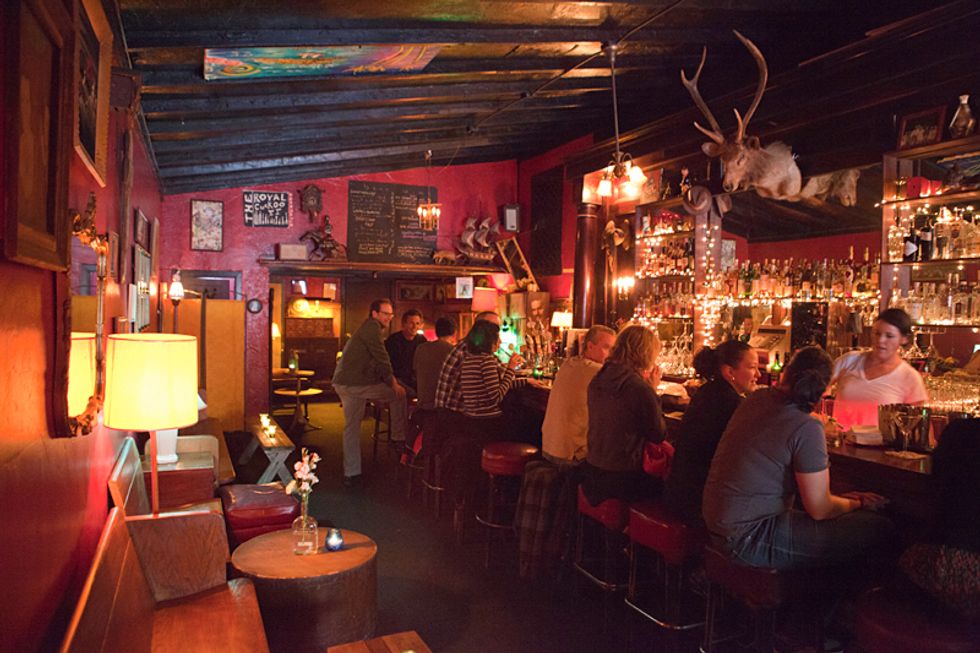 Previous Next
Patrons cozy up to the bar. 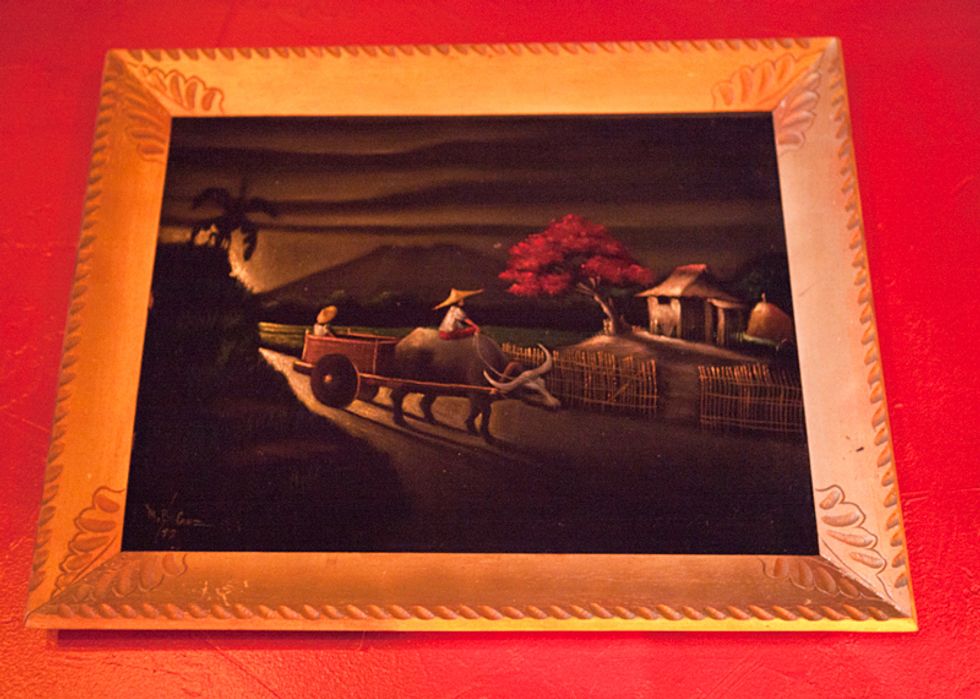 Previous Next
This is an old velvet painting from the 50s that owner Paul Miller got from his father. 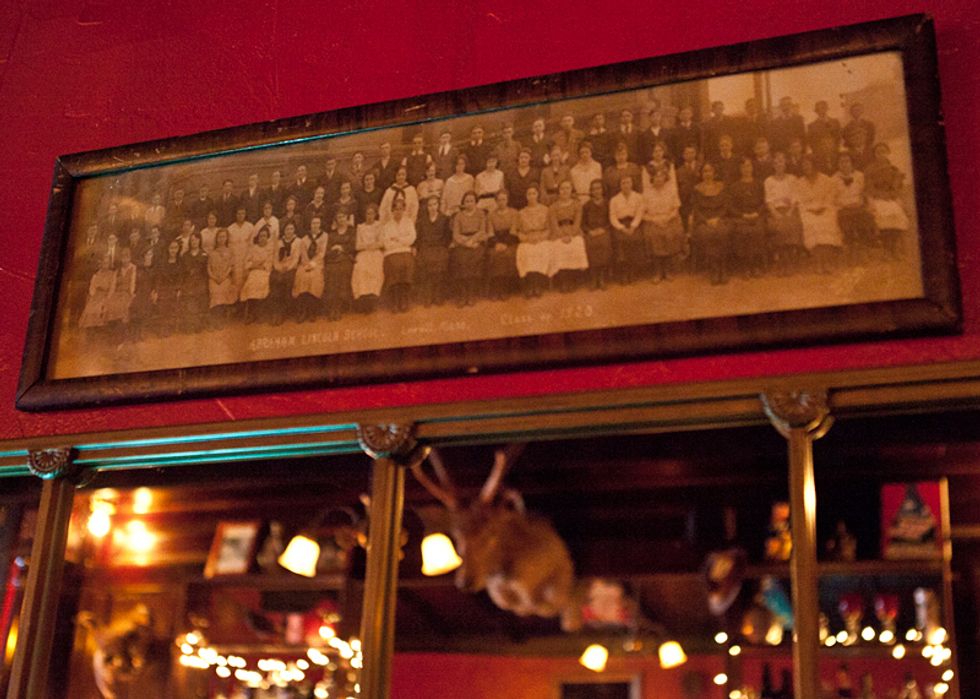 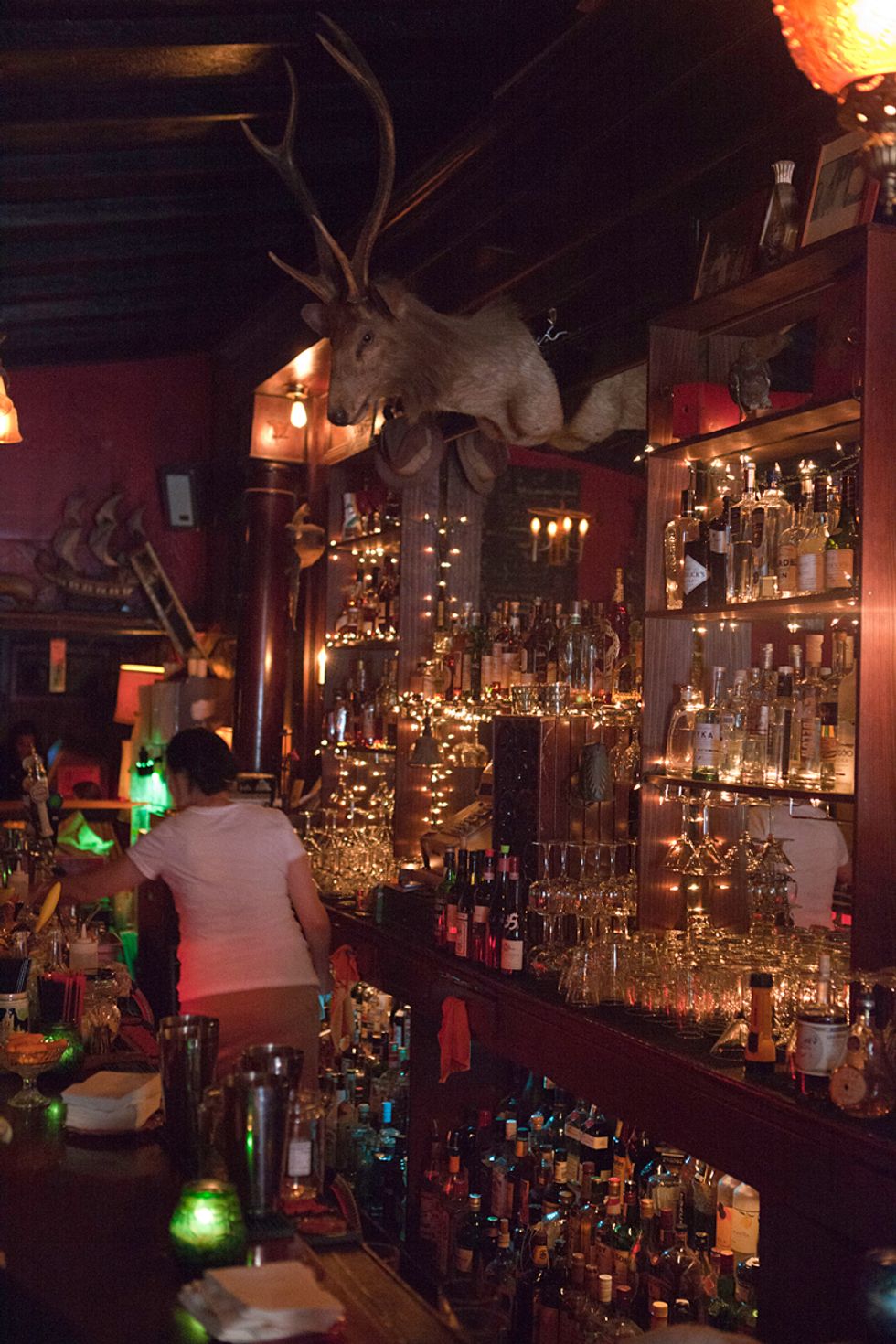 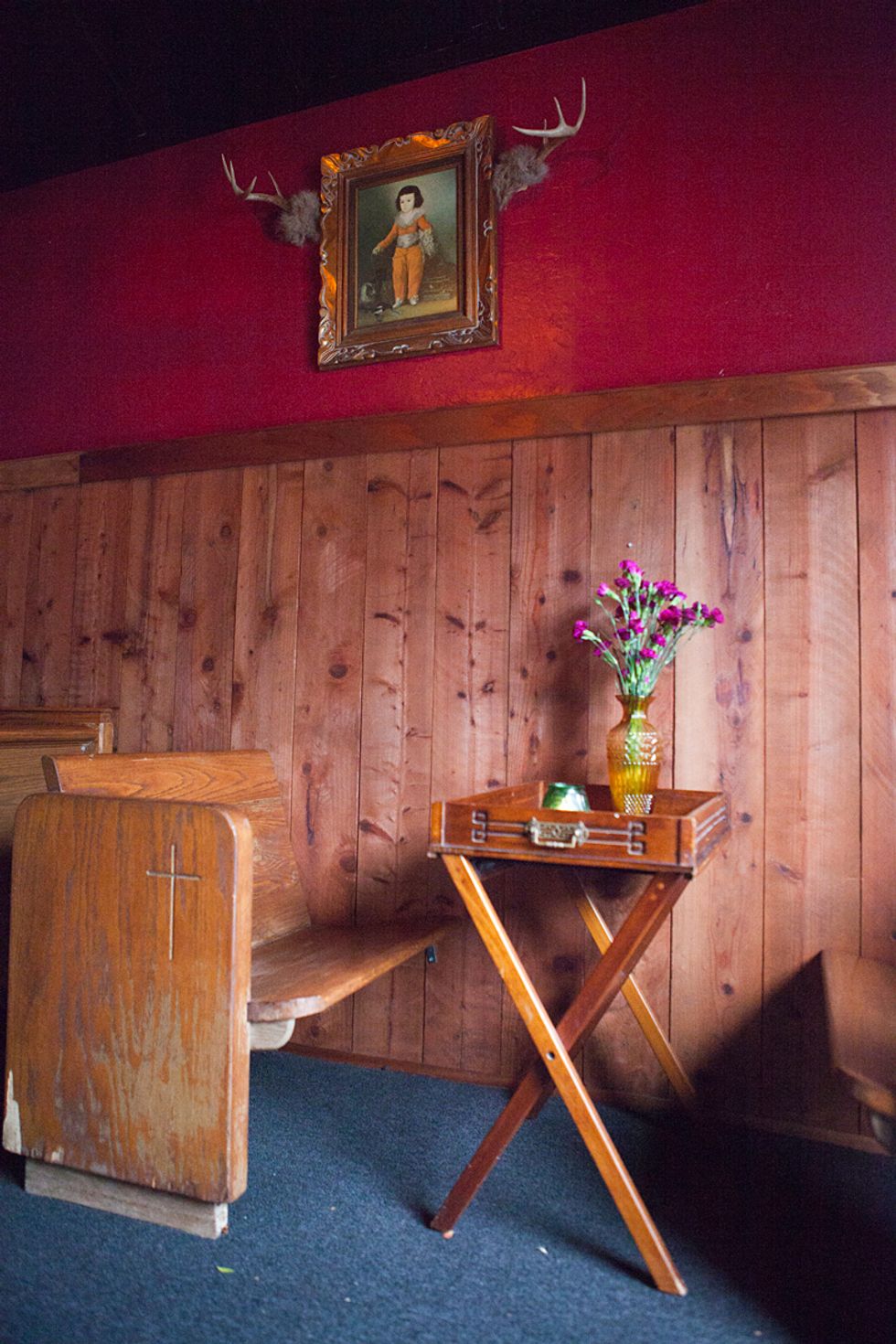 Previous Next
One of the vintage church pews patrons sit on. 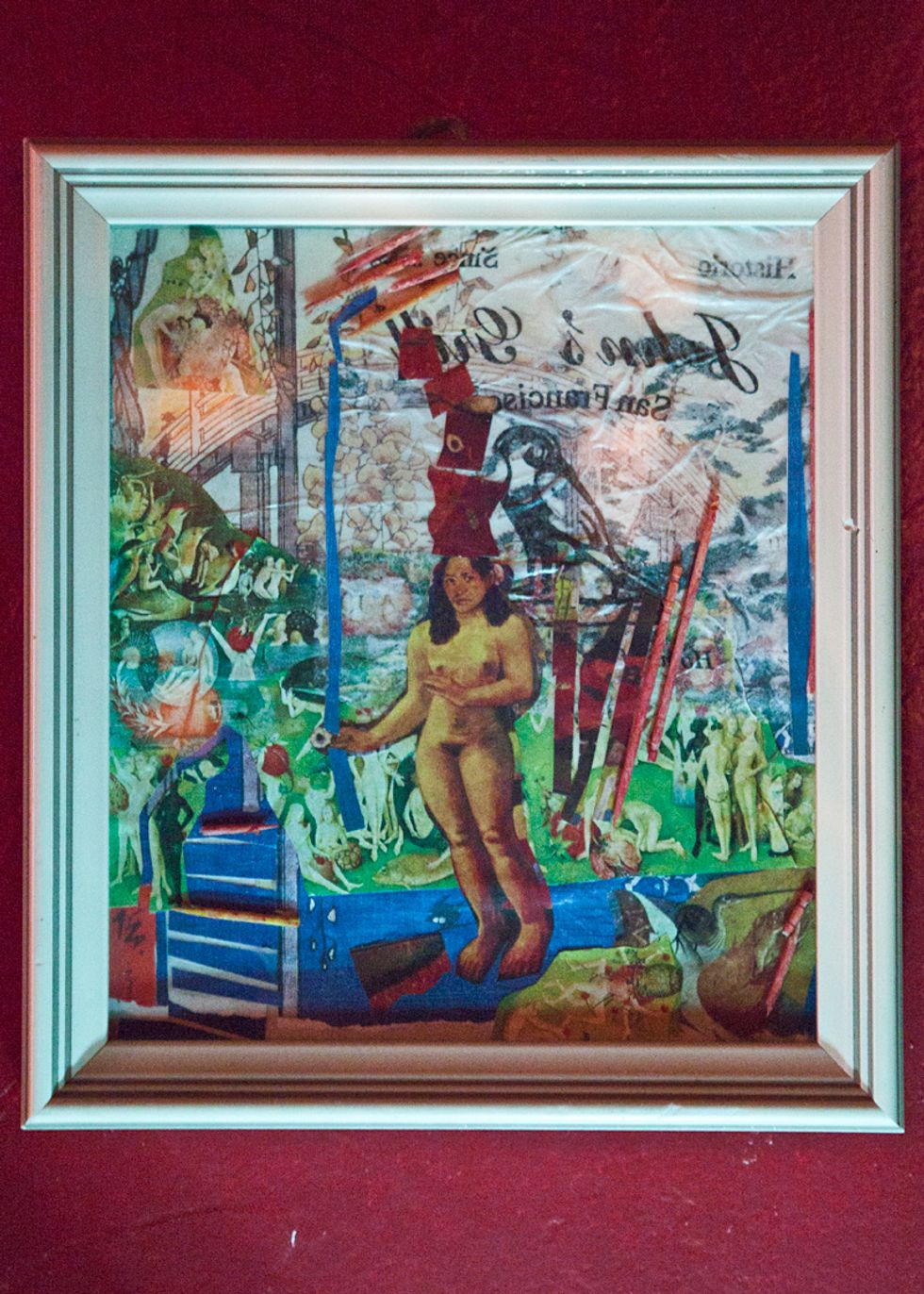 Previous Next
Collage art by a friend of owner Paul Miller's 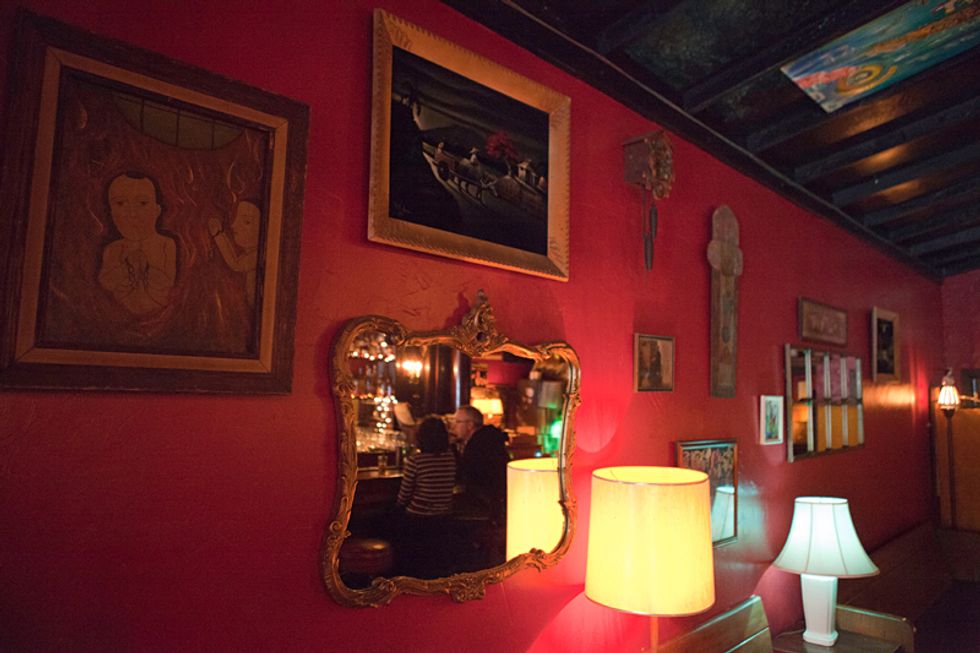 Previous Next
Random paintings and cuckoo clocks (of course) adorn the walls. 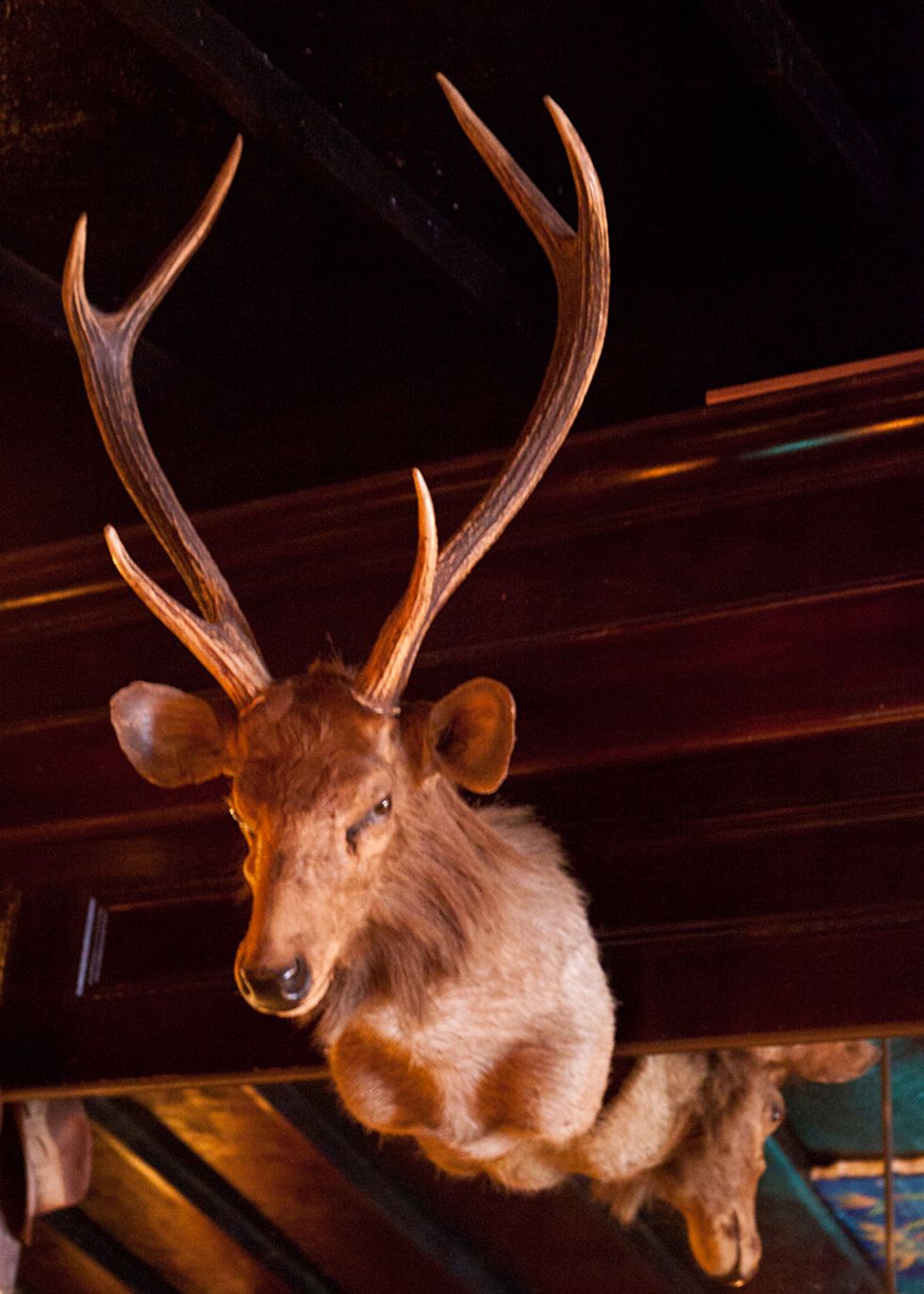 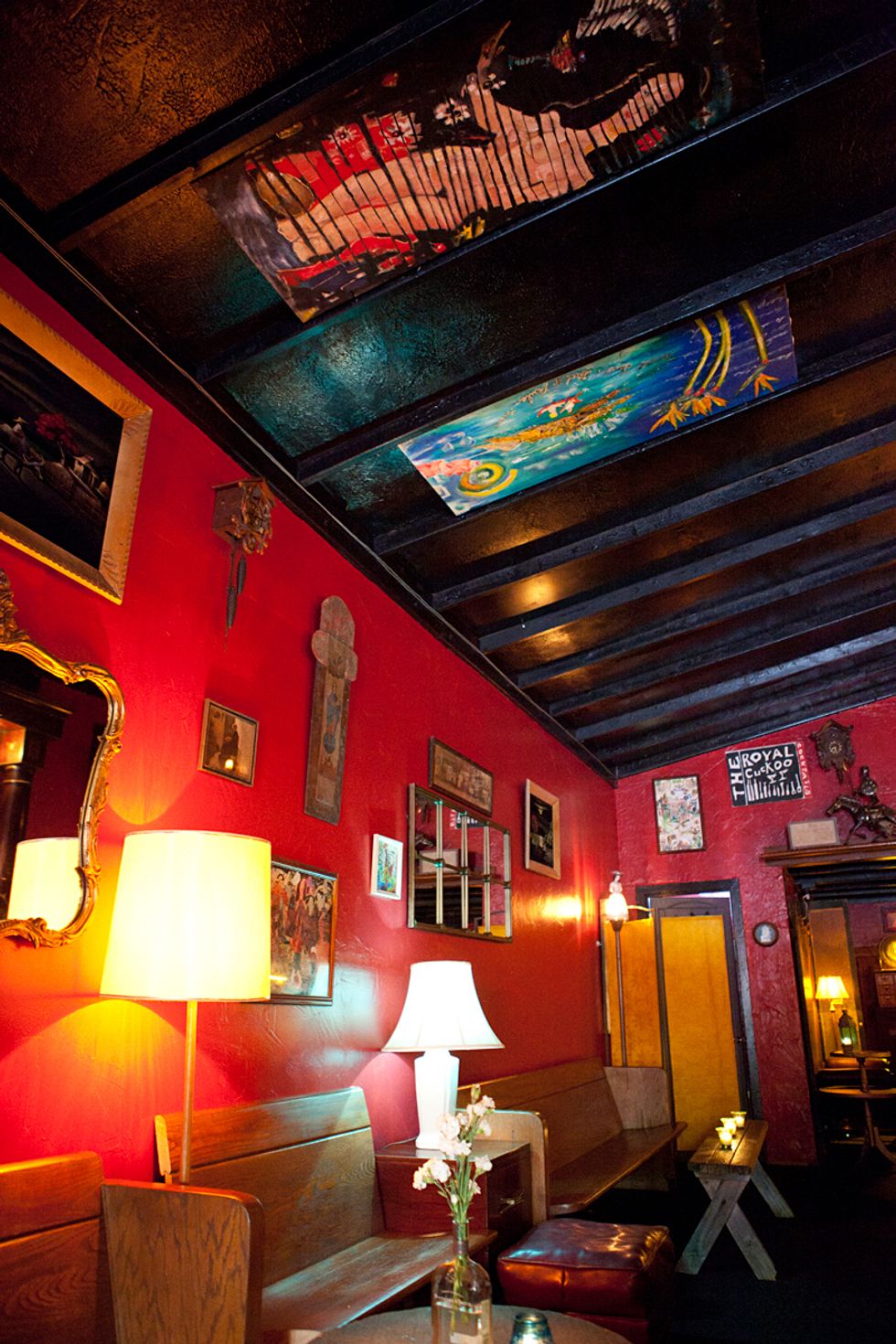 Previous Next
A friend of the owner's has started adding original paintings to the ceiling. 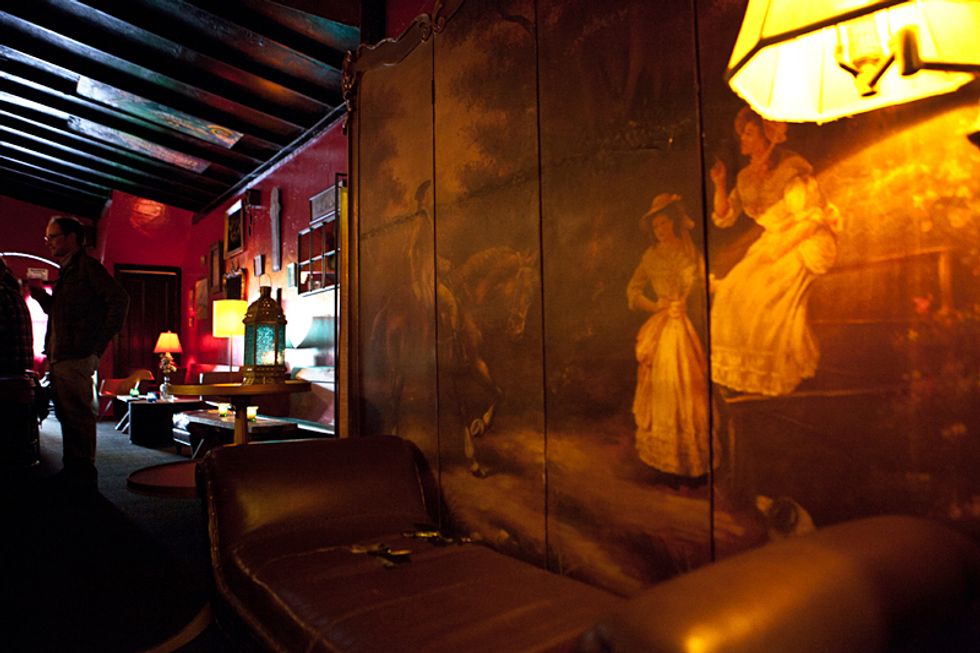 Previous Next
A vintage screen lines a wall near the back of the bar.

We're resurrecting an old series: Weird Art in Bars, in which we explore the wacky adornments on the walls of the city's favorite and under-the-radar watering holes.

If you live near the Royal Cuckoo, which sits right where Valencia and Mission Streets intersect, you know there's a giant Salvation Army just down the street. Put two and two together and you'll instantly realize that a ton of what lives on the burgundy walls at this neighborhood bar was found in that thrift store treasure trove. Owner Paul Miller has an awesome eye for kitsch. When he opened the Royal Cuckoo last December, he emptied out his apartment to fill every nook and cranny of the bar, and its art collection has only grown since.

The fact that the oddities found at the Royal Cuckoo came from Miller's apartment and thrift stores gives this cozy spot a lived-in feel, as if there were bartenders mixing up delicious cocktails in your own candle-lit living room. Vintage wooden church pews line the walls, various taxidermied animals are perched near the black ceiling, and old posters found in record sleeves hide in corners. And there's never a shortage of music to go along with your drinks; they have live blues music every night (their organ players are excellent and the harmonica blower doubles as the doorman on busy evenings), and a huge record collection you can request songs from a library card catalog system.

One of the bartenders told us that a few months ago, a drunken patron ran off with one of the framed paintings. "Good luck getting anything from us," she said. "It's all bolted down now."