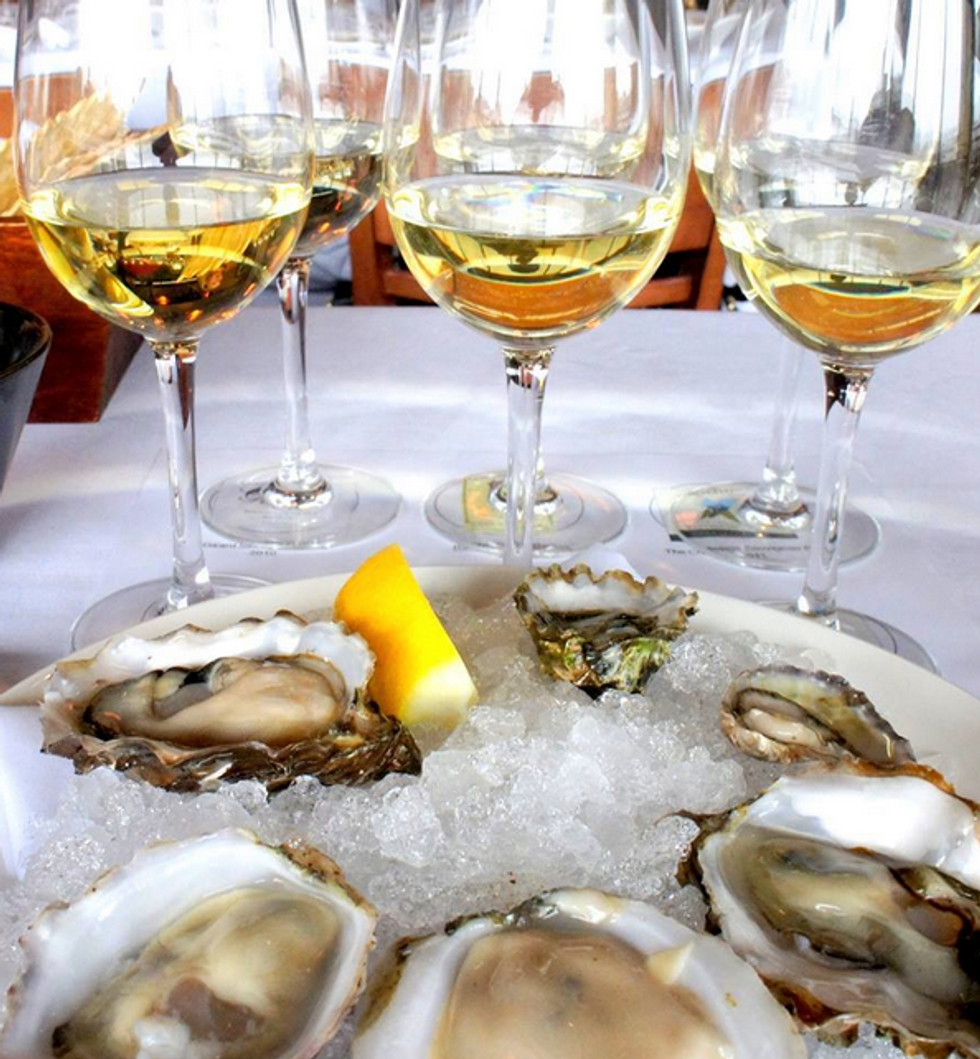 The America's Cup is over, but our love affair with New Zealand is far from finished. And the recent release of the second Hobbit film is sure to keep it top of mind. Fortunately several spots around town showcase the brilliant wines from the land down under just for our enjoyment.

For the biggest selection of Kiwi wines, head to the  New Zealand-themed pop-up restaurant, Waiheke Island Yacht Club, which will be staying open only through the end of  2013. Dominique Fourie, who leads the front of the house, points out that they focused on creating a great range with lots of variety and many top wineries represented.

They offer six different New Zealand Sauvignon Blanc including Cloudy Bay "Te Koko" from Marlborough ($96) and Middle Earth from Nelson ($56) which pairs particularly well with seafood. Other white varietals include Chardonnay such Man 'O War ‘Valhalla ($18/glass)’,from the actual Waiheke Island and both Riesling and Pinot Gris from Central Otago. There are also almost a dozen Pinot Noir from New Zealand most from Central Otago. Fourie says the terroir driven wines of the region have more depth are lighter, brighter, fruitful yet with a longer finish.

Another fan of Central Otago and the wines of New Zealand in general is Nicole Kosta, Food & Wine Director at Brasserie S&Pat the Mandarin Oriental, an Aussie who says there really isn't a rivalry between the two neighboring countries. Impressed by New Zealand's commitment and leadership in sustainability, she always has a strong selection of Kiwi wines.

On the S&P menu you'll find some "geeky stuff that's really hard to find" says Kosta like the Burn Cottage Pinot Noir ($120) and Casburn ($75), a second label, which is smoky with bright fruit. The menu also features two attractively priced sparkling selections from New Zealand, the Quartz Reef Sparkling Brut ($52) and the Sophora Sparkling Rose from Gisborne & Hawkes Bay ($40). By the glass check out the Roaring Meg Pinot Noir ($13), another Central Otago pick.

Visits to New Zealand left memorable impressions on Kosta and also Ian Burrows, the sommelier at Michelin two-starred Atelier Crenn who spent part of his career in Australia. His small but very curated list of wines includes two New Zealand gems from Bell Hill in the Waipara Valley, the 2009 Chardonnay ($200) and the 2009 Pinot Noir ($300). Burrows expresses appreciation for the refreshing whites with brighter acidity and reds with well-integrated tannins and remarks how easily they pair with Chef Crenn's elegant cuisine. Crenn herself is a fan of the Siefried Gewürztraminer ($45) from Nelson, one of the most approachable wines on the list.

Other spots around town to find New Zealand wines include Waterbar, Epic Roasthouse and Prospect. At retail, both The Jug Shop and K&L have notable selections.