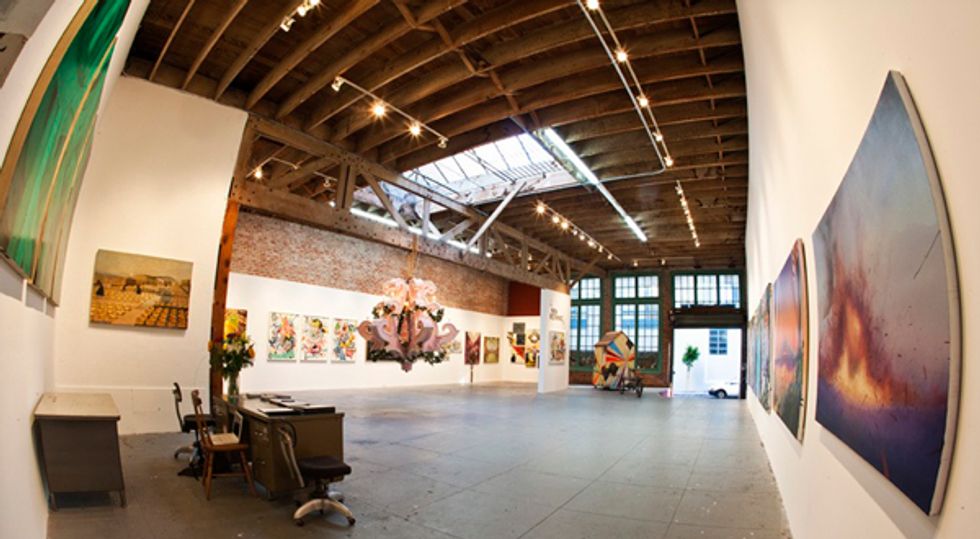 Remember when Tai emerged from her Cher and Dionne makeover in Clueless as a hot new babe? That's kinda like what happened to 941 Geary, a former smog and auto emissions check shop in the Tenderloin that has recently been reborn as a lofty-ceiling-ed, 3,000-square foot gallery space. It's brought to us by SF tastemakers Justin Giarla and Leigh Cooper, the minds behind such local game-changing galleries as as White Walls and the Shooting Gallery.

Just around the corner from their other galleries' Larkin outposts, the new space is set to host an impressive roster of artists (Shepard Fairey, Glen Friedman and Mike Shine, to name a few) and gargantuan installations in the coming year.

Giarla and Cooper are set to officially launch the endeavor with a circus show by Mike Shine (complete with real live carnies, a circus tent and games) on September 18. We caught up with the pair to talk about the new space, future shows and how they fit in the revitalization of the Tenderloin.

What separates this new gallery from the others?

Justin Giarla: White Walls has always focused on mainly on street art or street artists that are now fine artists. Shooting Gallery's always focused on pop art and pop surrealism and 941 Geary is going to be a culmination of all the things I've been doing over the last 8 years. It's going to specifically focus  on more internationally known artists that do large installation work. It's such a huge space, so I'm going to be focusing on huge installations, sculpture work and large scale murals. There's a wall that's 16 feet tall and 50 feet long, so I'm going to be encouraging artists to do murals there.

Do you guys have any shows or artists coming up that you're particularly excited about?

Justin: Mike acutally found a blue and white striped canvas circus tent that he's going to erect in the middle of the gallery. He's going bring in a Ford Model A truck which is from the 30s and they're going to fabricate a caboose, which is where the carnies will live.

You guys are going to have actual carnies?

How long will shows run?

Justin: Most of the shows in here will run 6-8 weeks, which is much longer than what we do down the street. Mike's show will up for a couple of months and after that we have a really famous music and cultural photographer, Glen Friedman.  He photographed for Def Jam Records back in the day.  He's photographed Run DMC, Slayer, and the Beastie Boys and he's also one of the first people who photographed Tony Alva and all of the Dogtown & Z Boys. It will be Glen and Shepard Fairey. It's going to be a good show, and we're working on some sort of surprise musical thing for that.

In January we're having a Jesse Hazelip show. He was showing with us down at White Walls but we're moving him up here because he does huge installations. We have a bunch of surprises for next year.

Do you guys see yourselves as part of the Tenderloin revitalization?

Leigh: We were here before that even started, so I guess in a lot of ways we're just continuing our presence and trying to do something positive for the community. As for actively engaging in it, I think there's only so much that can be done. The city is doing what they can do and all the smaller galleries and shops that are coming into the area are doing a great job of giving life to something that needs a little help and encouraging outsiders to come in and not be so wary of it. That's all we've ever wanted, to let people know that there's more to it than what's on the surface. I think we've been successful in doing that over the years. It's gotten a lot better.

Justin: Yeah the park helped. It's slowly gotten a little safer and the Tenderloin in general definitely became more of a destination location. I don't have to run out into the street and beat up drug dealers to get them away. Just by doing what we're doing and other people opening up, they just go somewhere else, which is easier.

Leigh: It's kind of been an unspoken respect too. After a while, I think they think its kind of cool. You see them wander in once in a while and look around. We're not hurting anyone, and I think the liquor stores and the pizza places and stuff like that really like it, and the bars too. It brings a bunch of people every month, so they get ready for it.