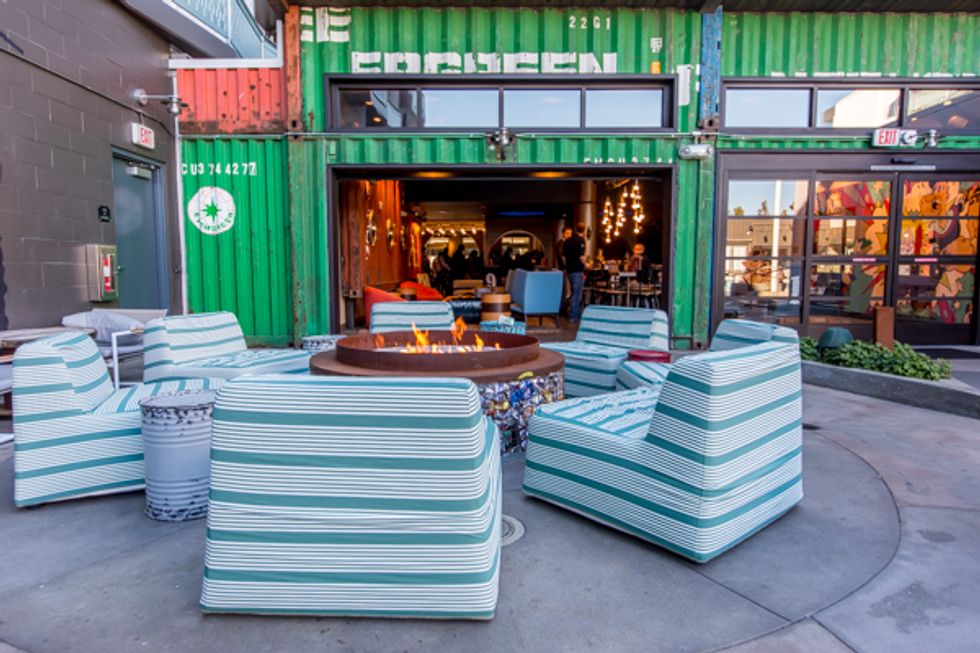 12 Reasons to Actually Hang out at Fisherman’s Wharf

We were skeptical too, but Fisherman’s Wharf deserves a second look. In addition to a few hidden gems, the famously touristy waterfront is reinventing itself with hip hotels, a destination museum and—gasp!—good food and drink.

If you aren’t charmed by this magical piece of San Francisco, you might consider moving back to Akron. Feed a five into the bill changer and delight in a warehouse full of vintage arcade games rescued from old seaside amusement parks. Ask a coffin-bound mummy if you will marry a blonde, sway to a tropical monkey band, peek into a Chinatown opium den, and watch Naughty Marietta do her stuff. // Musée Mécanique, Pier 45, museemecaniquesf.com

Lombard Street draws all the tourists, but we're partial to this lesser-known thoroughfare a few blocks from the shore. The one-block lane is lined with early 20th century warehouses and stables that have been transformed into a lush, urban garden. Need to up your Instagram game? Head here. // Water Street Gardens, Water St between Taylor and Mason streets

This is best $5 you’ll spend in San Francisco. Slip on a pair of plastic gloves and feel your way through a psychedelic maze of mirrors. It’s a giddy amount of fun and your admission is good all day. // Magowan’s Infinite Mirror Maze, Building O-11, PIER 39, magowansinfinitemirrormaze.com

This time warp restaurant is a hidden delight for retro buffs. Obscured under vivid neon signage, its richly atmospheric interior oozes Rat Pack-era Vegas. Of the property's three old-school bars, we swoon for the Mad Men feel of the second floor lounge. Sink into a blue tufted leather chair by the fireplace, order a Manhattan, and don your best Draper. // Fisherman’s Grotto, 2847 Taylor St, fishermensgrotto.com

Vibrant Hawaiian flags and Island Life stickers adorn every surface of this tiny take-away storefront on the Embarcadero. Lunchtime lines form for big colorful bowls of poke with tender cubes of ahi, chunks of avocado, briny roe orbs, daikon cubes, and mild wasabi cream. Take it to the waterfront benches around the corner and watch Pier 39 magically transform into Hanalei bay. Yep, Sammy's is that good. // Sammy’s Aloha, Pier 33, The Embarcadero, sammysaloha.net

It’s only a matter of time before you crave seafood and Scoma’s is where you need to be. The 50-year-old landmark recently hired Chef Gordon Drysdale to help bring the food and drink program into the 21st century. Fish still gets delivered daily from the Scoma's boat, but the prep improved, cocktails reflect the city we live in, and veggies are now sourced from Capay Farms. Swing by for a barrel-aged Manhattan and their insanely delicious take on Oysters Rockefeller in the renovated mid-century mod lounge overlooking the water. // Scoma’s, Al Scoma Way, scomas.com

After successfully revitalizing New York’s Chelsea Market, real estate investment firm Jamestown is turning its attention to undeniably charming Ghirardelli Square. They recruited Jonathan Waxman of NY’s Barbuto to open a dual-concept restaurant with a sprawling patio overlooking the water. They also signed on the Marina’s Le Marais Bakery to open a second location in the Square. Both projects are expected to open early 2016, but starting this December, Le Marais will host a pop-up until their permanent location debuts. // Ghirardelli Square, ghirardellisq.com

Designed by the same firm that gave us stylish Hotel Zetta, the Zephyr sports a hip nautical theme filled with games like in-room darts, ping pong, shuffleboard, and an oversized Jenga and Connect Four. Yet the feature that will bring you to your knees is an 10,000 sq. ft. landscaped courtyard brimming with shipping containers, fountains, and fire pits. It's the one of the best outdoor venues in the city and, next month, it'll add a tricked out travel trailer serving food, wine and beer. // Hotel Zephyr, 250 Beach St, hotelzephyrsf.com