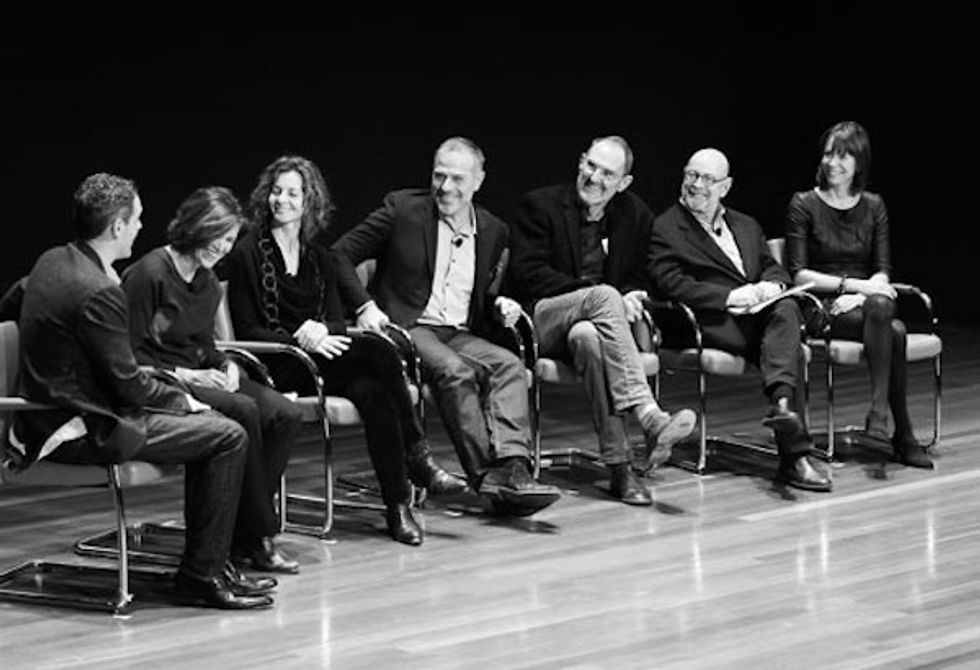 More than 500 design–industry professionals gathered for Bloomberg Businessweek Design 2014, the second annual conference that proved to be another blockbuster of inspirational programming. Once past a few Space-Age prototypes (is it a car? A motorcycle? More on this later) attendees heard from a slew of industry leaders, including Makerbot founder Bre Pettis, High-Line architect Elizabeth Diller and young gun Sha Hwang (inventor of Gifpops and currently tasked with overhauling Healthcare.gov).

In addition to the unmistakable inclination towards gray, rectangular eyeglasses (the apparent frame of choice sported by half the crowd), a few themes penetrated the talks. First among them was the challenge of translating big data into useful information and creating user-inspired change. The transformative speakers refilled the creative tanks of many a design insider—read on for our five favorite things from the conference.

As a genetic scientist working within SF-based software company Autodesk, Hessel approaches life as a design equation. Wondering what that means? The man is pioneering the field of 3-D-printed molecules, including components that can be designed to respond to and target specific cancer cells. It sounds like science fiction until you see his slide of a bio printer, which can “print” all the cells of a human liver.

In the words of Lit Motors marketing manager Ryan James, “Crawl out from under your rock.” There’s no other explanation for why everyone doesn’t know about the C-1, an incredible electric vehicle that’s been test-driven all over SOMA by the local company. Resembling a cross between a motorcycle and a Prius (but sexier…way, way sexier), the two-wheeled beauty employs gyroscopic technology to aid its impeccable balance, even when body-slammed by founder Daniel Kim.

Morey’s laser-like focus was on the usability of data, or how to translate information into actionable service. As the AVP for the Innovation Strategy Group at frog - the product strategy and design firm that designed the smart Goodwill bins scattered through SF (they sense when used and when full, pinging the collectors) – he’s clearly found a few solutions. He envisions the product world—from your coffee maker to your trashcans—as a living organism that responds to user actions. “Why not create an internet that can sense emotions and predict one’s needs?”

Who hasn’t taken a spin on the High Line, the Meatpacking district’s most bucolic visitor attraction? But designer James Ramsey has a vision to reverse our understanding of the world by harvesting natural sunlight and directing it into an abandoned trolley terminal on New Yorks Lower East Side. Called the Lowline, it will amplify and direct sunlight into the underground space, allowing greenery to thrive in a sliver of the more than 13 acres of unused underground space beneath Manhattan.

Computer-generated graphics have come a long way, and no one can take more credit for the field’s evolution that Hal Hickel, animation director for the robot-versus-aliens film Pacific Rim. He walked us through the creation of the uber-realistic exotic creatures that he animated for the film, for which he took textural cues from rocks and mud flats, structural inspiration from reptilian fossils, and muscle movements from the articulation of silverback gorillas. It was a lesson on creating realism by imbuing familiarity to unfamiliar objects. Also, the fight scenes were epic.