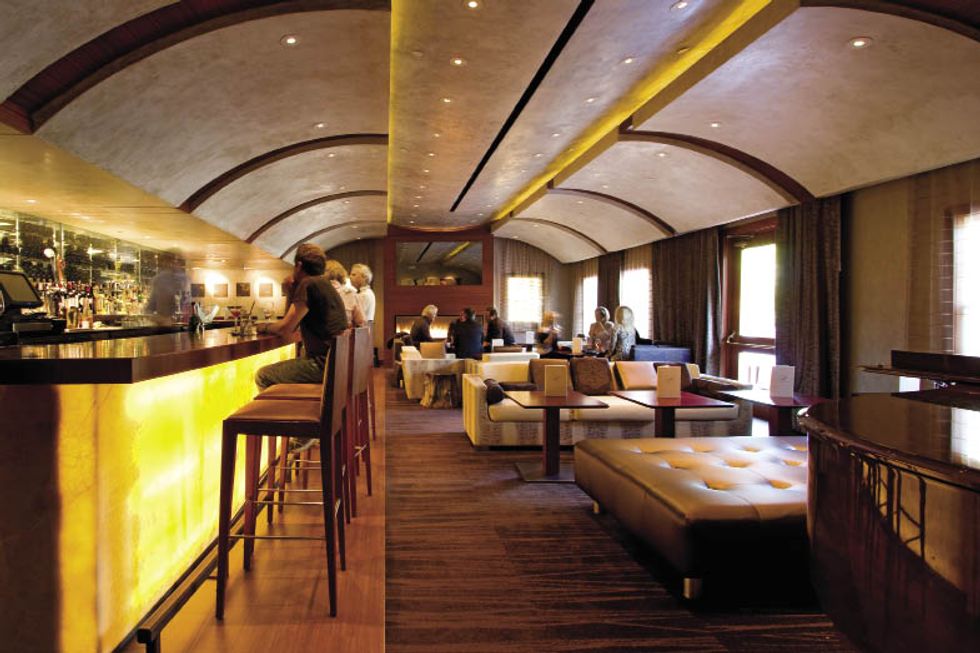 A Weekend of Wine, Food, Art, and Pampering in Saratoga

To city folk, Saratoga may seem like a dark horse in the race for culinary greatness. But in fact, the town is home to serious contenders.

Sent Sovi is also celebrating. In time for chef-owner Josiah Slone’s 10th anniversary on the job, the French-Californian restaurant has opened the doors to a next-door wine lounge. Order the “Local Awesomeness” flight from Kathryn Kennedy Winery, or ask Slone to saber a bottle of Champagne right before your eyes.

Foodies and culture vultures can come together at Montalvo Arts Center, where artist-in-residence Sita Kuratomi Bhaumik opens the group food-art exhibit “Mountains in My Spoon” this month (starting Oct. 18).

And if you want to make a weekend of it, take Sunday to detox at Preston Wynne Spa, where skin purification gets a high-tech twist, thanks to infrared sauna therapy, which helps the body sweat out toxins.

More To Do in Saratoga:

Hakone Gardens
I usually skip garden tours when traveling, but this one's a must-add to a day trip or weekend itinerary. It just so happens that Hakone is the oldest Japanese garden in the Western Hemisphere—almost a century old! The 18 lush acres of bamboo forest, madrone, wisteria, and camellia are accented by a koi pond, zen garden, moon viewing house, and tea pavilion. Bonus: Several scenes from Memoirs of a Geisha were filmed here.

Mountain Winery
This year's summer concert series has just come to an end, but the famous Mountain Winery is still worth a visit during the off season. Opened by French expat Paul Masson in 1905, the wines created here (thanks in part to another French expat Charles Lefranc) are what eventually helped land California on the international wine map. The castle-like grounds are steeped in a rich history that every oenophile should know about.

Cooper Garrodand Garrod Farms
The estate offers Test Pilot, a fun red wine series—the labels are based on winemaker George Cooper's time as a WWII pilot (he flew the P-47 "Jug" with the 412th Fighter Squadron in the European Theater). The tasting room is open daily.

Perched atop the hills at 1,000-foot elevation, Garrod Farms offers guided horseback rides through the family vineyards and the Fremont Older Mid-Peninsula Open Space Preserve. It's the primo way of taking in views of the San Francisco Bay and Santa Clara Valley. Tip: Ride before you taste. On the last Sunday of the month, Garrod Farms offers a combo package—a one-hour trail ride followed by wine tasting and a mini buffet.

Deja & Co.
I'm not a fine jewelry kind of gal, but my inner girly-girl was unleashed at one of Deja & Co's Sip, Sparkle, and Wish parties. They'll host a small group of you and your friends for an afternoon of champagne sipping, sweet treat eating, and a little hopin' and a wishin'. Fill a silver tray with your favorite baubles from the store, try them all on, take pictures, and just go all out at this adult dress-up party. When all is said and done, the staff will add your favorite gems to a personal wish list that they'll keep on file for future use. Just be sure to drop a hint to your significant other.

Saratoga Oaks Lodge
If you decide to make a weekend of it (which I highly recommend), you'll need a place to rest your head. Book a room at the quaint Saratoga Oaks Lodge right on Main Street. The lodge is unassuming from the outside, but once you pull into the parking lot, you'll discover the little oasis under the trees of Saratoga. The super affordable rooms ($129 for a queen room - $235 for a deluxe suite) are clean, quiet, and spacious, and many of them have private outdoor patios. Plus, the service is the kind of warm, small-town hospitality that will make you want to come back often.