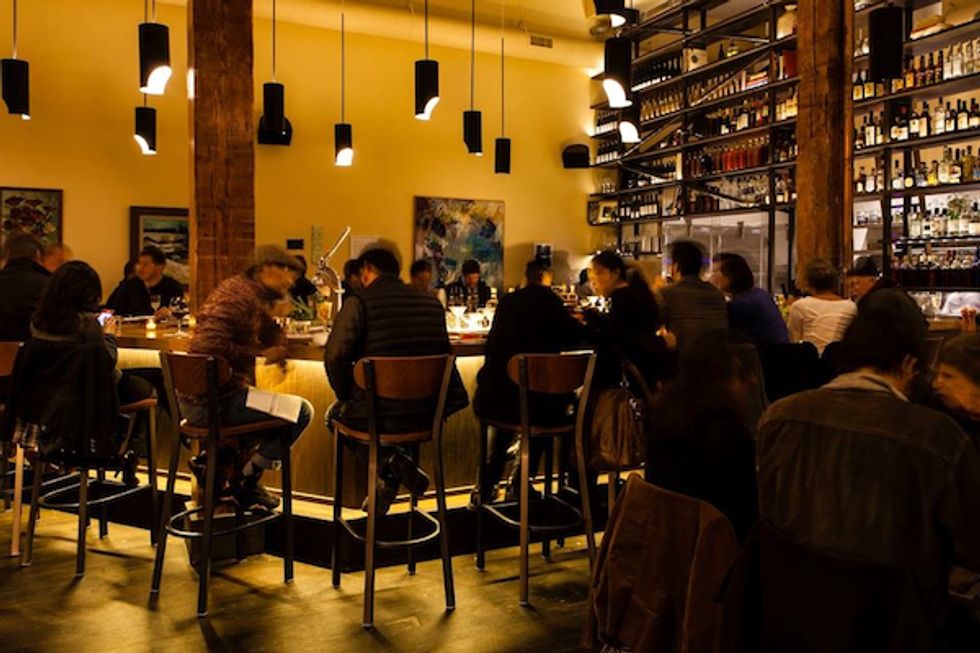 After Midnight: A Guide to SF’s Late Weeknight Eats

Like any world-class city, San Francisco is a variegated banquet of exceptional food, even in the wee-hours of a thirsty Friday or in the starry-eyed throes of a Saturday night. Yet, in a city full of midweek festivals, shows, movies, and music, the real question is—where’s the best food at 10:45pm on a Tuesday?

No matter the night, there’s plenty of eats to savor after the evening events that tempted us to play late after work:

Stepping out of The Independent on a Monday Night

Once Bi-Rite closes at 9pm, Nopa on Divisadero is the answer to nearly any late-night question in Alamo Square. Serving fancy feasts until 1am nightly, Nopa cooks wood-fired, rural organic to light up your night–from a big country pork chop to a hearty, vegan Moroccan vegetable tagine. They even help fill the Bi-Rite void with their creamy goat cheese bread pudding.

If you’re low on cash after supporting your favorite band’s merch station, Club Waziema is open until at least 12pm (except Sundays) and has a late night trifecta of a pool table, jukebox, and deliciously affordable Ethiopian platters.

The Van Ness corridor is awash with great midweek destinations, but it’s an easy mistake to cab it to other neighborhoods when even McDonald’s closes at 11pm. Pull the pin from your ride share app and walk north to Tommy’s Joynt. Open until 2am nightly, they serve heart-pounding sandwiches from Pastrami to BBQ brisket to pair with roadside-style comfort foods and daily specials.

If you just stepped out of the symphony and don’t want to get barbecue sauce on your top hat, Alta CA is also open until 2am nightly, delivering to your mouth a culinary chorus line from chickpea & oxtail Fritters to a gently steamed local fish.

Laughing your ass off at Punch Line Comedy Club

A three-minute walk north on Battery will deliver your laugh-lined soul to Globe, a place chefs and servers eat when their restaurants close. Slaying hunger until 1am daily (except Sunday), Globe gets late night right with a menu to satisfy your gastric fantasies, such as their salad lardon (topped with poached eggs and served with a bacon vinaigrette), wild mushroom pizza with truffle oil, or an order of their famous macaroni and cheese.

After a mid-week double encore at Bimbo’s 365

If your recipe for success includes a brimming cup of guacamole, Don Pisto’s is worth the ten minute stroll south on Columbus Avenue. Open until 12:30am daily (except Sunday), Don Pisto's has everything you crave, from tortilla soup to authentic street eats to pitchers of sangria.

If you’re ready to unleash your inner Italian Stallion midweek, walk a little further to Tosca Cafe, open until 2am daily (except Mondays). It was named one of the best new restaurants by Bon Appètit for their house-made pastas, roast chicken for two, and duck-fat spuds.

Finishing up some late night heroics at a SoMa Startup

Sometimes a night in the city involves sitting behind a desk, attempting to win a staring contest with a mouse cursor. For the brave code warriors of SoMa, Oola Restaurant & Bar keeps the doors open until 1am Tuesday through Saturdays for a much needed drink or some quality time sweet talking their ginger soy glazed baby back ribs. An hour here can’t give you back those lost nights, but Oola can make any night feel worth it.

Whether you’re walking up from Civic Center or down from Nob Hill, all late night roads lead to Ryoko’s Japanese Restaurant & Bar in the Tenderloin. In addition to being open until 2am nightly, Ryoko’s is a rare place where “exceptional” and “affordable” mingle in the same sentence. Their fish specials and inventive rolls hold the mayo and let the freshness speak for itself.

Waking up on Hippy Hill. At 11pm. On a Tuesday.

Don’t panic. King of Thai Noodle House is a short but necessary walk north on Seventh Avenue (on Clement.) Open until 1am nightly, their warm staff will massage your brain with the warm broth of their vegetarian Tom Yum Gai and serve sweet bites of papaya salad to help get you from high up on the hill to back down to mother earth in no time.

Another late night in the Castro

Marcello’s Pizza on Castro is open until 1am daily serving up creative pizzas combinations by the slice or pie. If you prefer to eat by the light of a greasy spoon, Orphan Andy’s is your 24/7 breakfast, lunch, and diner destination.