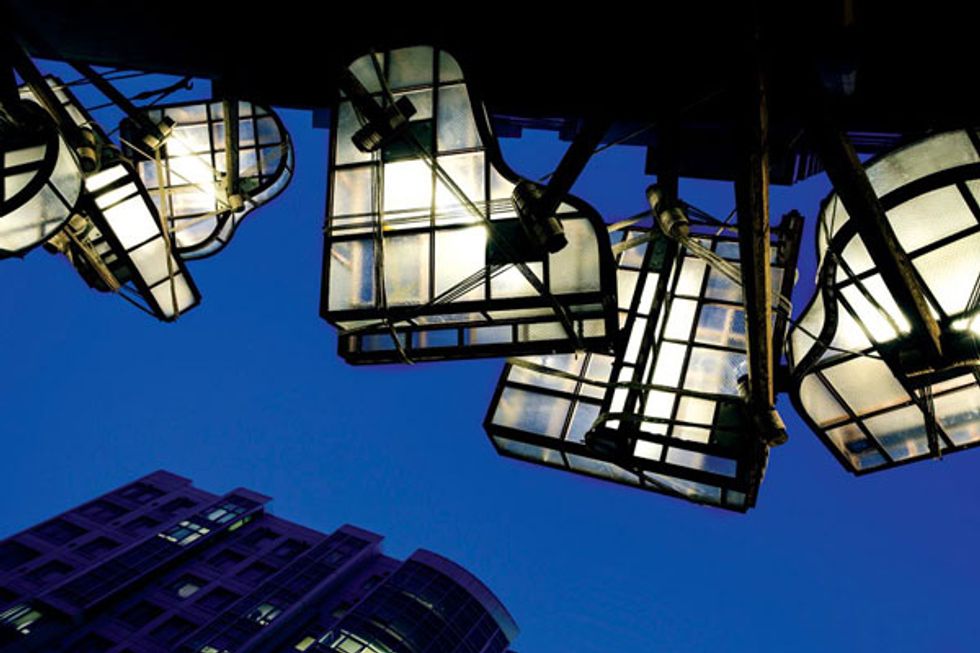 7x7 Magazine's annual Best of SF showcases all you could ever hope to eat, drink, see, buy, know, and do in the city. Here is the Best of Culture:

The impending demolition of Brian Goggin’s iconic 6th Street public art piece, Defenestration (remember the building with furniture clinging to it?), may have inspired his latest work. Caruso’s Dream, an installation named after Italian operatic tenor Enrico Caruso and created in collaboration with Dorka Keehn, is a series of 13 glass-and-steel pianos suspended with sailor’s rope and reclaimed wood beams from the new Avalon Bay condo development at 55 Ninth Street. When night falls, the pianos light up, flickering to the rhythms of silent recordings of Caruso’s singing.

Scott Hansen (aka Tycho) isn’t a new name on the ambient music scene, but 2014 just might be his breakout year. After a standout set at SXSW, he dropped his fourth studio album, Awake, in March to rave reviews. Soundwise, it’s the perfect music for your next PCH road trip. Next up on his gig list: Outside Lands in August.

This documentary about six scientists who discovered the Higgs boson particle (by simulating the Big Bang) follows one of the largest and most expensive experiments in history, bringing it to life with stunning visuals that appeal to nerds and neophytes alike. Directed by physics professor Mark Levinson, a UC Berkeley PhD alum, the film is available for streaming or HD download.

After receiving your meeting time and location via text message, someone with a yellow umbrella will lead you to Joe’s Clock Shop in the Tenderloin, where you’ll pass through a secret doorway into a speakeasy for an immersive drama production staged by the Boxcar Theater. You’ll walk among
actors in character as you wind your way through a piano bar, casino, and cabaret. Newsflash: Drinking and gambling twist the plot in this live show.

The self-managed underground rapper—think Santigold meets Missy Elliott—is known for her fiercely electric live shows. In February, MicahTron opened for Girl Talk, and she is currently recording an EP with multi-platinum producer Anthony Resta, who’s worked with Elton John, Duran Duran, and Blondie. Check her out at the Elbo Room on June 28 for the Dyke March after-party and at El Rio on June 29 for Queerly Beloved.

The Rock is about to get cool again when “@Large: Ai Weiwei on Alcatraz” is unveiled this fall. The artist’s latest project—a collaboration with longtime gallerist Cheryl Haines and the nonprofit FOR-SITE Foundation—will consist of four site-specific multimedia installations exploring incarceration as a form of repression. It will have taken a number of trips to Beijing to complete the work because the artist is forbidden to leave China. Consider it the art coup of the year. Sept. 27–April 26, 2015

Historic local businesses that aren’t quite contenders for official landmark designation will not go the way of the dodo, thanks to SF Legacy Bars & Restaurants, which was originally conceived as a preservation tool by SF Heritage when such local institutions as Gold Dust Lounge, Tonga Room, and Tosca faced closure. The latest additions, to be announced this month, include Cha Cha Cha in the Mission, The Ramp, and Top
of the Mark. Look for the book in fall 2015.

As part of an overall neighborhood improvement project, four rainbow crosswalks are being added to the intersection of Castro and 18th Streets. Slated for completion later this year, the crossings (a partnership between the Community Benefit District and SF Department of Public Works) are geared toward slowing traffic and fostering even more joy in the already vibrant and historic ’hood.

The latest trick up Daniel Handler’s sleeve: a $3,000 cash award to a librarian who “has faced adversity with integrity and dignity intact.” The lucky librarian with the most troubling essay submission will be awarded the riches by author Handler—or his nom de plume, Lemony Snicket—at June’s American Library Association conference in Las Vegas. In Handler’s signature style, the prize will include “an odd, symbolic object” from his private stash.