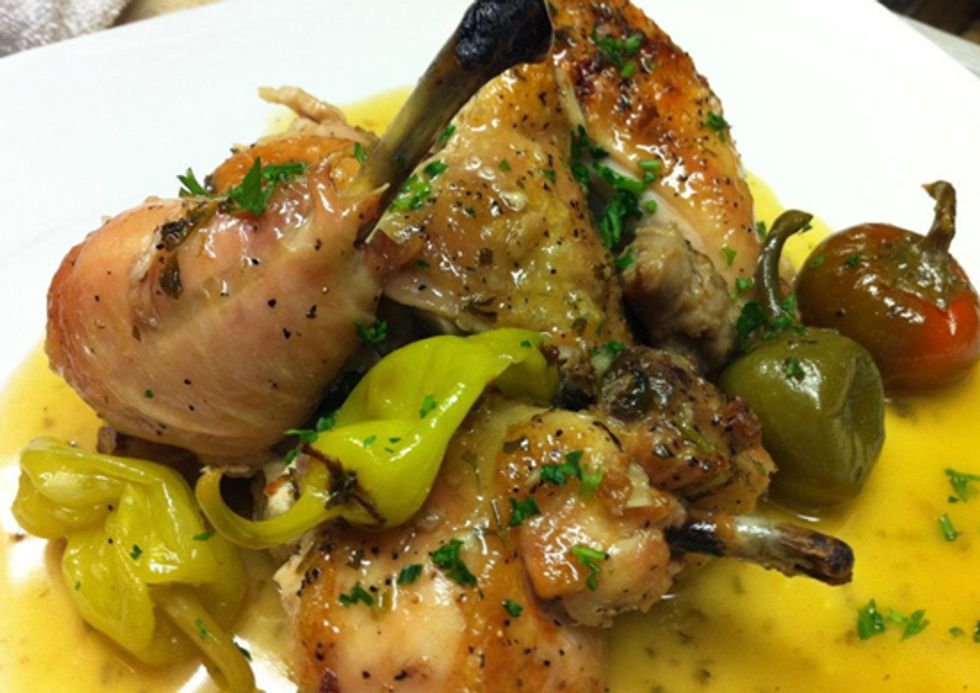 Have you noticed Dobbs Ferry, the new, large, wrap-around restaurant on the corner of Hayes and Gough? The owners, Scott Broccoli and Danny Sterling, purchased the former Allegro restaurant and an adjacent kebab shop on Hayes, uniting them to create an expansive new neighborhood hangout with blue wainscoting, exposed brick walls and a huge avocado tree growing out of a closed interior patio area. Sure, the restaurant has reclaimed wood floors and a lot of the menu uses locally sourced ingredients, but they're not the type to mention it on the menu, or even in passing conversation for that matter.

The staff is more likely to light up when they elaborate on the cocktail list, listing drinks made with un-pretentious spirits (Jack Daniels, Sauza Hornitos, Wild Turkey 81). There's even a "Rum and Coke," featuring your choice of regular or diet.

The food? I'd call it dressed up family cooking. Most dishes are inspired by food the partners grew up eating in a town called Dobbs Ferry in upstate New York. Tables are encouraged to start a meal with the house substitute for bread service: ragged strips of pizza dough that are fried up and served with a side of old-school marinara. The only truly vegan option on the menu, the herb-forward flavor reminds of simple sauces from Pizza Hut or Ragu. Nostalgic types are going to dig it.

The house special of Chicken Scarpariello ("Chicken Scarp," as our waiter called it) sums up what the kitchen is doing. A refined version of an East Coast Italian grandma favorite, it's a roasted half chicken that's finished with a flip in the pan alongside spicy Italian sausage chunks, small bits of fried potato, and softened peperoncini peppers. The latter ingredient, straight from the jar, is a bit of a shock in our seasonally minded, hand-crafted everything landscape, but it adds a great bit of interest and spicy hit to the dish. This is a fun-loving restaurant where you can also get yams topped with marshmallows, after all.

Adding to the no-frills intrigue, regular diners get to take part in Dobbs Ferry's late night family meal, inspired by shift meals cooked by chefs for chefs. Executive chef Mike Yakura unveils his staff creations to the public nightly from 10:30 p.m. to midnight for a mere $5. He's even started inviting guest chefs in to make the shift meal on Thursdays. I'm told Boxing Room's Justin Simoneaux is up next, either this Thursday or the following. He'll probably by too busy enjoying himself to brag about the pedigree of his ingredients.