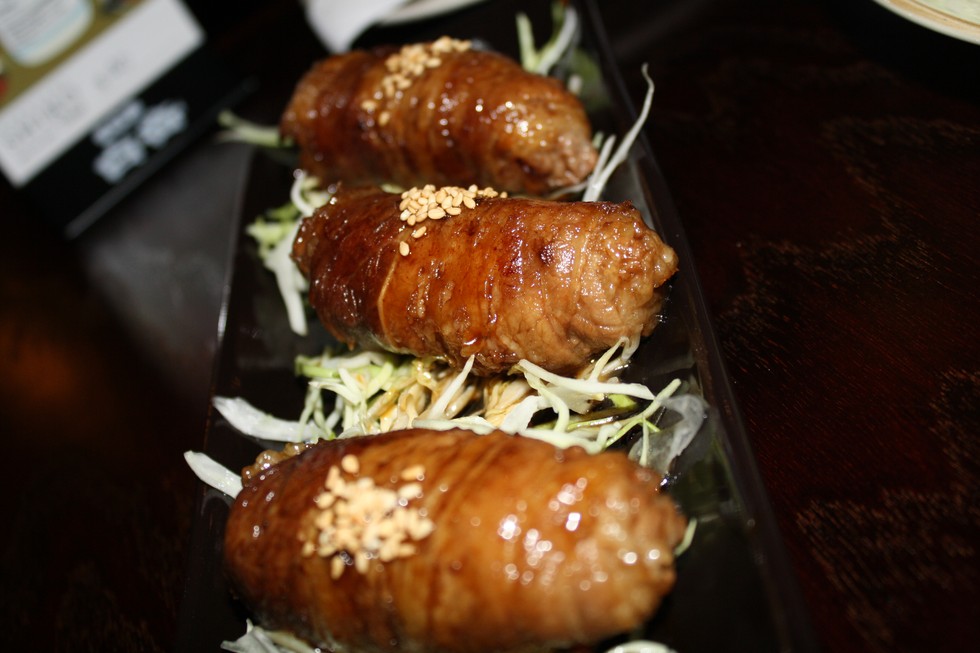 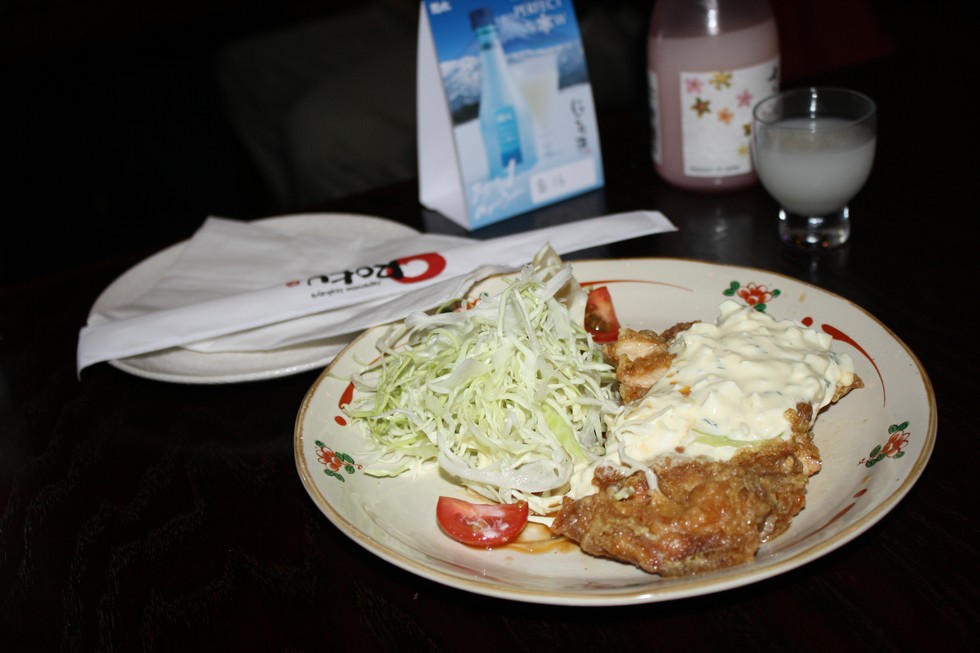 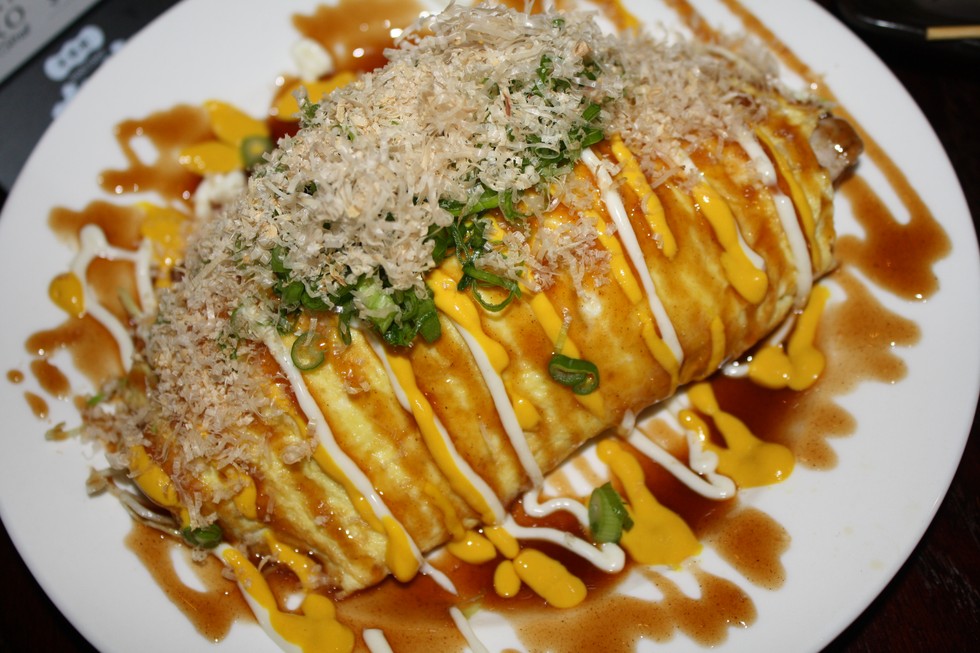 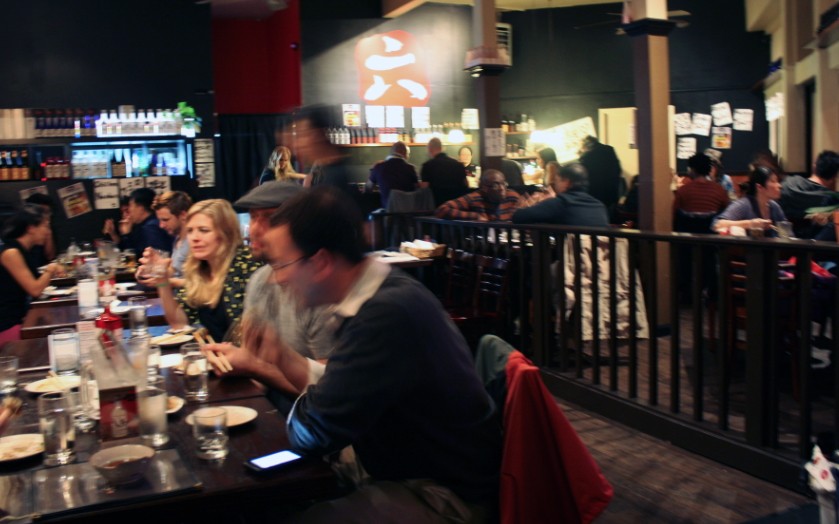 Previous Next
Busy on a Saturday night. 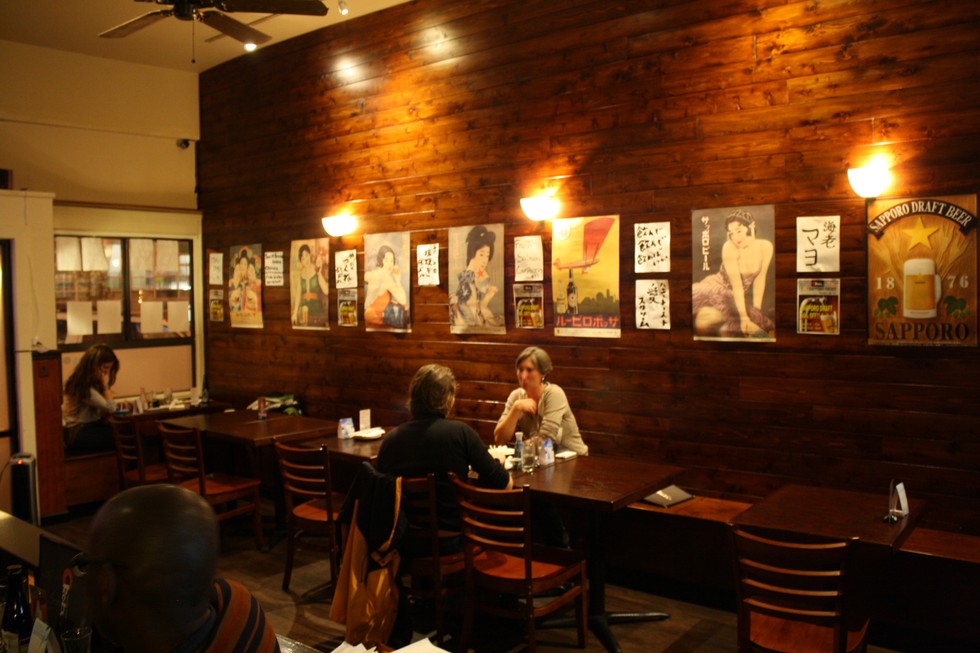 Previous Next
Before closing, you can see all the Japanese prints on the wall. 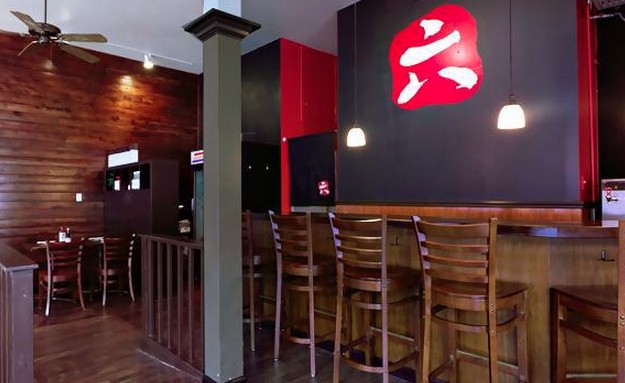 Previous Next
The empty interior.

The izakaya openings flurry of 2010 and 2011 has abated, but the genre lives on. We've yet to see a major izakaya shutter, and one more hit prime time six weeks ago: Roku (1819 Market Street), from Jay Hamada of the JapaCurry food trucks. On Saturday, I ventured out through the downpour to try it out. It was a perfect, chilly night for fatty, warming izakaya fare, but—given how young the restaurant is—I was still a little surprised to see the place packed, with a waitlist running for tables.

Hamada said his revamp of the former Hunan Garden space was minimal, but it's significant enough to make the space feel attractive and new again. As you can see from some of the pictures above, there's a sleek and manly Japanese feel to the room now, all gray and dark wood with the striking red logo seared into the wall.

Hamada is from Kyushu, the island at Japan's southern tip. His aim with this izakaya is to bring a lot of the dishes from his hometown to San Francisco. He says even people in the North of Japan don't know about hyper-regional Kyushu specialties like chicken nan ban, or nikumaki onigiri. It would be sort of like serving scrapple, a.k.a. the Pennsylvania treat, to someone born and raised in San Francisco.

Our chicken nan ban ($8) came first, a breaded and fried cutlet doused in a pool of Japanese-style tartar sauce mixed with chopped-up egg. Shredded iceberg lettuce and quartered cherry tomatoes filled the rest of the plate. The dish's biggest asset was the chicken itself, which managed to stay super tender under the golden coating. I later learned it's dipped into a sweet-sour vinegar sauce, called amazu, after frying. Hamada says people have been asking for hot sauce with the dish, which isn't traditional, but he'll probably start offering it to appease American palates. Apparently chicken nan ban is huge in Tokyo right now.

The nikumaki onigiri ($6) was another eye-opener: Three rice balls wrapped in thin slabs of beef that have been marinated in sugar, soy, mirin and sake. The rice absorbs all the juices and drippings of the beef when it grills, making for a very richly flavorful bite that is much more supple than your average onigiri.

The final gut-buster was tonpei yaki ($6), which immeditely calls okonomiyaki to mind. The thin, omelet-like exterior conceals shredded hunks of cabbage and stir-fried pork. On top, zig zags of mustard, mayo, and faintly ketchupy okonomiyaki sauce meet a dramatic pile of bonito, waving in the air like a thousand little sea creatures. This item has been well-received, and Hamada says he'll also offer traditional okonomiyaki on the menu soon.

I wish we had gotten to try Roku's tonkotsu ramen, which Hamada is very proud of. Noodles are made in-house and the broth's flavor is built up for 12 hours on the stovetop.

But there wasn't room for much beyond the light tomato compote dessert. The latest addition to the menu, it's a slightly sweet, housemade white wine jelly, tossed with fresh citrus supremes, and cherry tomatoes pickled in white wine and sugar. Sort of like a loose Jell-O parfait, the dessert went down quick and easy. Showing the authentic direction Hamada is headed at Roku, it's nothing Bill Cosby could get behind. I'm looking out for Hamada's next menu addition, which will probably be another first for San Francisco.

Carolyn Alburger is the editor of Eater SF.