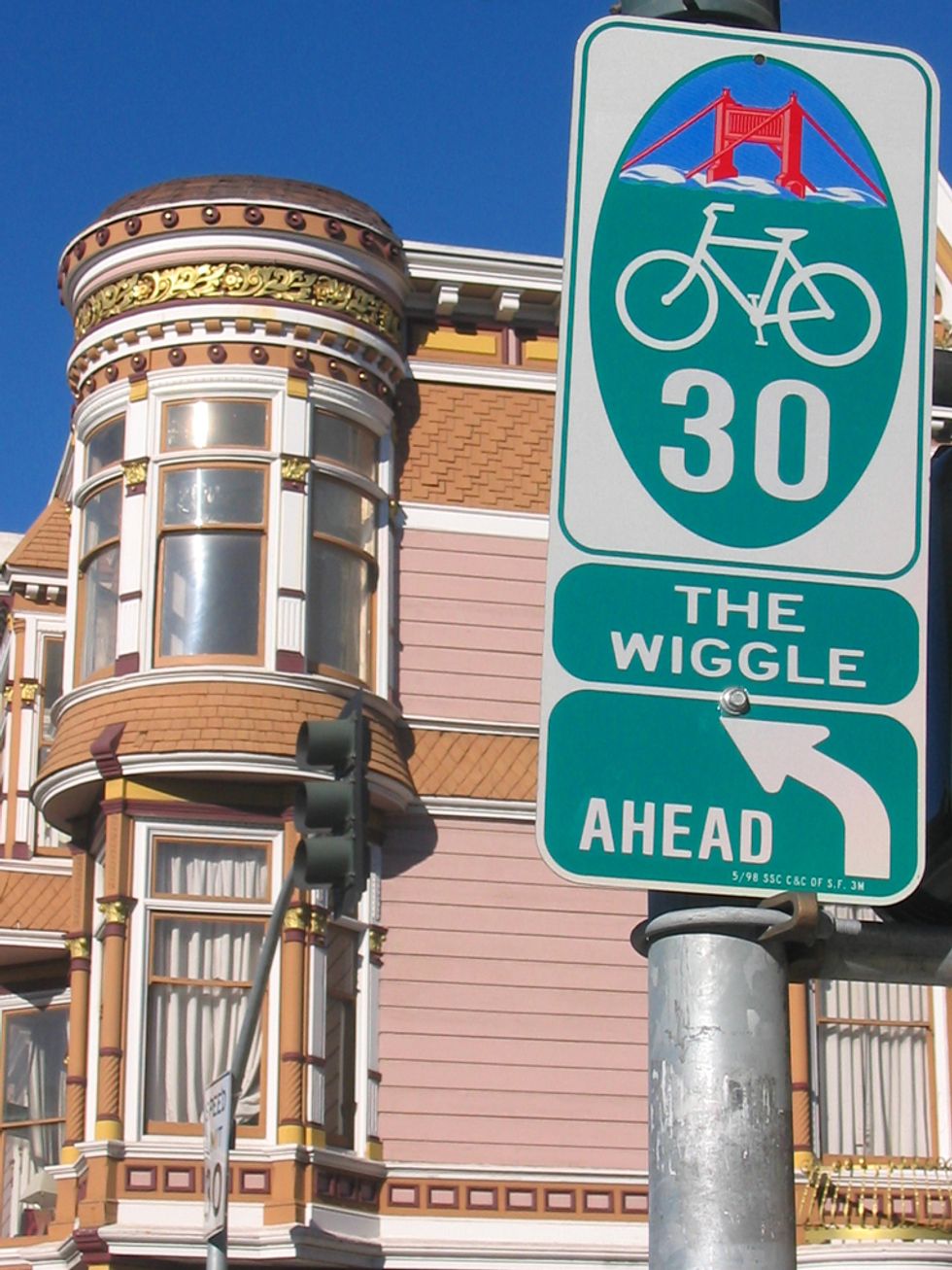 San Francisco’s bicycle network makes up hundreds of miles of city streets. These are the streets the City has deemed best for biking. San Francisco bike routes are designated by green bike route signs with numbers on them. East/West bike routes are even numbers and North/South are odd—just like the highways. But that’s all really wonky and insider-y, and requires a lot of looking up and down to find the often obscured signage.

Here’s what you really need to know: San Francisco has a lot of hills and a lot of high-speed streets. You want to avoid those. The best biking streets are those that avoid the hills and either give you separation from traffic or have a nice bike lane on a relatively calm street.

Here are five of the best bike routes for getting you across town:

The Wiggle: San Francisco’s most iconic bike route. This series of twists and turns through Duboce Triangle and the Lower Haight will get you from the center of the city to the west side with nary a hill. It’s the flattest East/West route and is your channel to Golden Gate Park, the Sunset, the Richmond, NOPA and beyond. Start at Duboce Avenue and Market Street, behind the Safeway, and follow the bright green sharrows (bike arrows) on the ground. You can also just follow the sea of bike riders, as you’re never alone on the Wiggle.

Valencia Street: If you see someone biking on Dolores Street or Mission Street it’s likely because they just don’t know about Valencia. This street sees more bike traffic than almost any other — and with good reason. It’s flat, there’s a bike lane the entire length, bike parking corrals line the street AND the lights are timed at bike speed. That’s right, if you pedal at a consistent speed, you’ll hit every green between Market and Cesar Chavez!

Polk Street: Ask any regular bike rider how they get to the Marina or Russian Hill, and they’ll likely say Polk Street. This bustling street is the best, flattest North/South route in the city. Find yourself on a parallel street to Polk and you’ll either be braving freeway traffic or sweating up and down San Francisco’s hills. Start at City Hall and pedal your way all the way to Fisherman’s Wharf on this relatively flat route. The City is looking at options for including separated bikeways the full length of this street, which would make it much safer for riding. For now, be diligent and aware when pedaling here; many a SF rider has been doored here.

Fell & Oak Street:  These sister streets are a must-know for any San Francisco bike rider. The bikeway is only three blocks in either direction, but they’re three crucial blocks for thousands of San Francisco cyclists. Separated, green bikeways were just installed this year, and it now means that you can pedal from the Wiggle to the Panhandle without dodging high-speed traffic. The route runs from Scott Street to Baker Street, and connects the Wiggle to the Panhandle with glorious, green, hill-free bikeways.

17th Street: Recently repaved and striped with a new bike lane, this crosstown route is a dream to ride. This is the best route to take from the Castro to the Dogpatch and anywhere in between. Looking to get to the Ramp for breakfast? 17th Street is your route. Wanting to pedal to Mission Cliffs for a climbing session? 17th Street all the way. Lots of people still use parallel streets for biking, but you’re missing out by not using 17th.