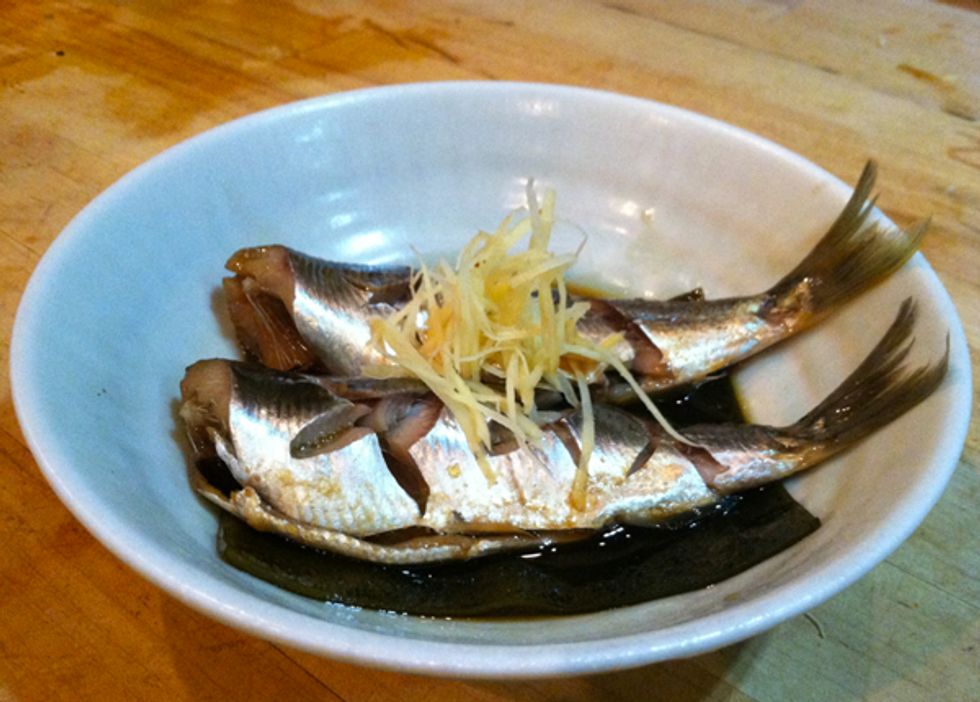 Herring Has Its Moment on Bay Area Menus

There's a new fish in town that hasn't been seen on Bay Area menus for about five years: Pacific herring.

Paul Johnson of Monterey Fish Market says 50% of the local herring population has been used for pig and chicken feed in years past, and most of it has been shipped out to Japan for its roe, but he's working to change that. At this year's annual fishery conference for legislature, he and Geoff Shester of Oceana stated the case for increased local human consumption and representative Jared Huffman passed the Forage Fish for Food bill AB 1299. Now chefs like Michael Tusk of Quince and Jean-Pierre Moulle ofChez Panisse are calling in orders.

A small silver bony sea dweller similar to the sardine, herring is abundant in local waters. The flesh is naturally high in oil content, yet chefs describe the flavor as clean and delicate.

Michael Tusk of Quince and Cotogna says the herring works well as a crudo when it's extremely fresh. As you can see in the image below, he's been serving it as an amuse with simple accompaniments like kumquat and Maldon sea salt to cut its natural oiliness. Tusk describes herring as "texturally delicate" when raw,  but if it's not impeccably fresh, he likes to prepare it using traditional Scandinavian methods like pickling.

On Cotogna's Sunday supper menu, Tusk serves herring that's pickled with white wine, Bay leaves, shallots, and carrots then serves it with horseradish on crostini. He remembers eating pickled and creamed herring as a kid on the East Coast, so he likes to stay true to the nostalgia of the fish most of the time. "The herring doesn't come around often," adds Tusk. "It's so nice to see it here."

Herring is bound to show up on Japanese menus around town too. Called nishin, it's highly prized in Japan for its roe or kazunoko. At Ippuku in Berkeley, chef Christian Geideman lightly cooks them in sake and shoyu for the simmered "Nimono" section of the menu (pictured at top), and he also salt-grills them whole.

In Japan, the fish is often filleted, but Geideman says our local Bay Area herring are too small for that preparation by Japanese standards. Johnson says the local product is small becuase they've traditionally been fished here for roe, during spawning season when the fish are naturally lower in fat content. Hopefully, as he and other local leading fisherman work to create a consumer demand for herring in the Bay Area, the commercial fishing cycle will change so that we're catching them when they're fatter. It's all a work in progress.

This year, expect to see local herring in limited amounts on local menus through the middle of February. Try them while you can, and if you see herring on a menu around town, do share it with everyone else in the comments.