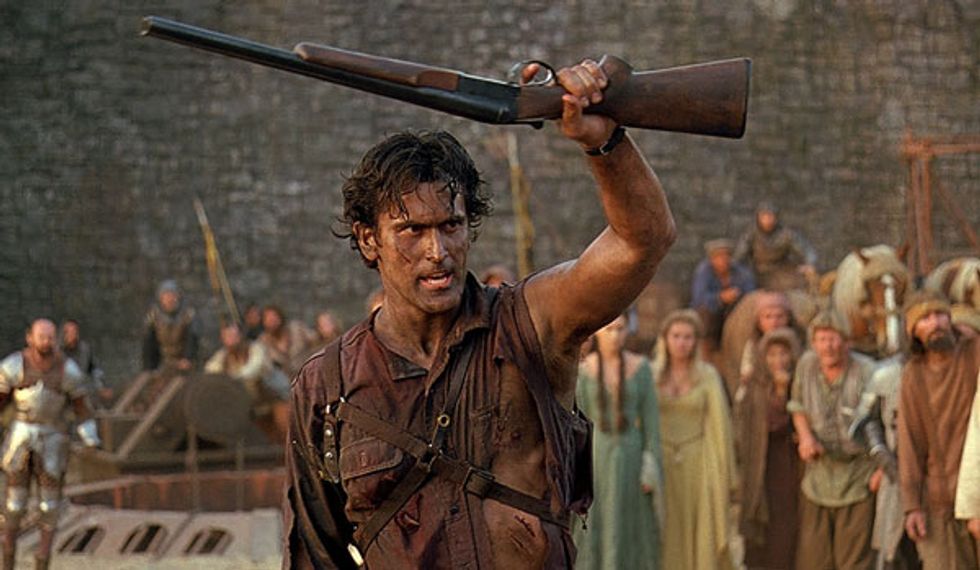 The third and final German Gems, a single-day showcase for new and vital German-language cinema, arrives Saturday for its farewell appearance at the Castro Theatre. Otherwise, it's a week of birthdays at the city's historic movie palace.

1. Army of Darkness
Where:Castro Theatre, 429 Castro St., 415-621-6120
When: Jan. 13
Why: Deadites unite this Friday for six hours of blood-soaked, Midnites for Maniacs mayhem, with a formidable triple bill featuring Darkness, Sam Raimi's gleefully ridiculous 1992 sequel to his Evil Dead movies; Mary Harron's 2000 adaptation of the Bret Easton Ellis chiller American Psycho; and, concluding the malicious marathon as midnight nears, an original grindhouse print of the 1976 camp classic Alice Cooper's Welcome to My NIghtmare. Host Jesse Hawthorne Ficks will be celebrating his 36th with a trio of terrors for just $12.

3. Carnage
Where:Balboa Theatre, 3630 Balboa St., 415-221-8184
When: All Week
Why: Exiled director Roman Polanski returns (not literally) with his highly anticipated adaptation of Yasmina Reza’s 2006 play God of Carnage, about two pairs of parents trying to settle a violent dispute in a civilized fashion. The task proves beyond them, as an evening of reasoned dialogue devolves into petty antagonism, highlighted by slyly uproarious turns from an irritated Christoph Waltz and a delirious John C. Reilly.

4. American: The Bill Hicks Story
Where:Castro Theatre, 429 Castro St., 415-621-6120
When: Jan. 18
Why: Whether you think Bill Hicks was the greatest comedian America has ever produced or you simply know of him as the guy whose act may have been stolen by Denis "No Cure for Cancer" Leary, American is a fascinating, exhaustive portrait of a man whose death, at 32, ended a career of laughably candid confessions, controversy and uncompromising social satire. Celebrate his strange, inspiring and ultimately heartbreaking journey in honor of his 50th.

5. Cleanflix
Where:Roxie Theater, 3117 16th St., 415-863-1087
When: All Week
Why: The Mormon religion forbids images of nudity or violence, but that doesn’t mean these chaste Utahns aren’t curious about Titanic or The Matrix. Thanks to a handful of backroom entrepreneurs with digital editing software, “clean” versions of new and classic films filled the racks of stores like CleanFlicks and Flick’s Club. Hollywood rushed to quash these bootleg operations, but community support emboldened these puritanical pirates. Cleanflix is a fascinating, even-handed documentary filled with twists and a scandal too salacious to be stocked on rental shelves around Salt Lake City.

6. Le Havre
Where:Opera Plaza Cinema, 601 Van Ness Ave., 415-771-0183
When: All Week
Why: Inspired by the financial, political and moral crisis that has resulted from the substandard treatment of refugees trying to find their way into the European Union from abroad, Finland's entry to next year's Academy Awards for Best Foreign Language Film consideration tells the story of a French shoe-shiner (André Wilms) defending an African boy (Blondin Miguel) from deportation. Here, director Aki Kaurismäki wrings wry humor from even the darkest moments of an earnest, feel-good immigration fable.

7. Pariah
Where: Embarcadero Center Cinema, 1 Embarcadero Ctr., 415-352-0835
When: All Week
Why: Based on her award-winning short film, writer-director Dee Rees' Sundance favorite stars Adepero Oduyeas as a 17-year-old African-American woman who lives with her parents in Brooklyn's Fort Greene neighborhood, and is quietly coming to embrace her identity as a lesbian. Never sure how much she can confide in her family, her adolescent heroine strives to get by with grace, humor and tenacity, with mixed (but usually compelling) success.