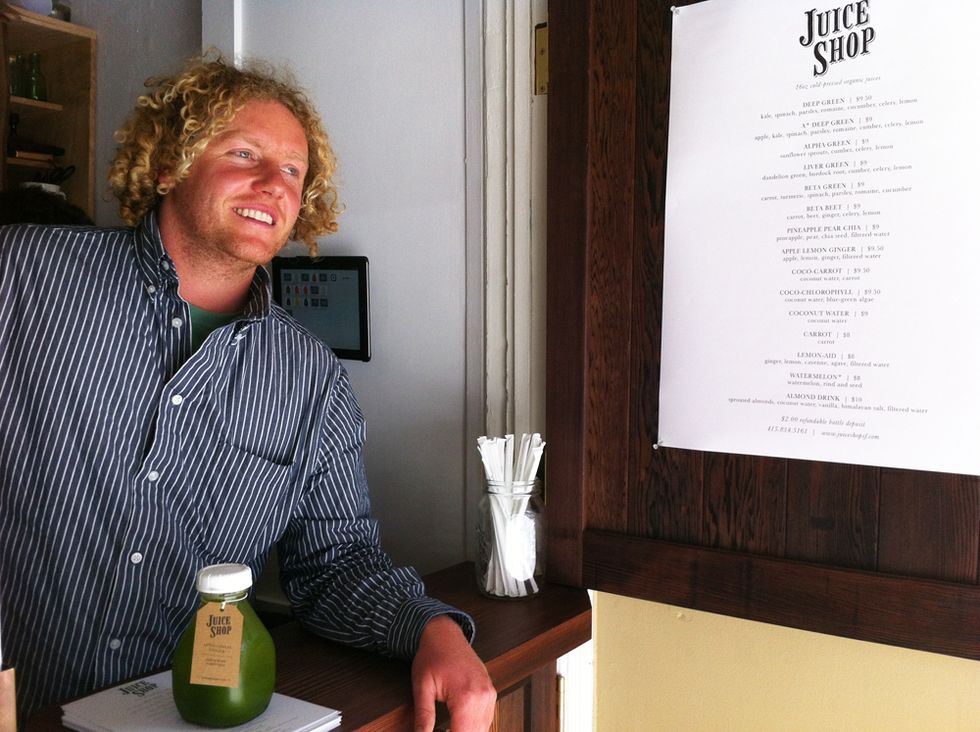 “Who would have thought you could take a little closet and turn it into such a cute juice shop?” an old lady asked me as we stood in front of Juice Shop, the new shop on Union Street recently opened by the Ben, Charlie, and Lina Gulick.

She makes a good point. The space is tiny. Like, 4-feet-by-10-feet-tiny. But don’t let the small size fool you. Tucked inside Juice Shop’s wooden doors are some of the healthiest refreshments you'll find in the city.

Vegetable-based juices are enjoying a surge in popularity, and the Gulicks' advocacy predates the mainstream appeal by years. It all started when Charlie contracted a rare liver disorder in his early 20s, and after exhausting Western medicine approaches, experimented with green juices as a holistic alternative. The juices worked for him, and he’s been drinking green juices ever since, making them from raw, locally-sourced vegetables.

He and his wife Lina, along with his brother Ben, expanded the juice production into a full business, called Juice To You, which delivers juice right to customers front doors. Now they have a permanent closet–I mean, storefront–where you can walk right up and pick out your own juice.

The menu is extensive, yet straightforward. There are the green juices of varying intensity, coconut-water based blends (like coconut water and chlorophyll), and the juice mash-ups, like the new and popular pineapple-pear-chia.


Most passersby are not regular juice drinkers, so they show up a bit intimidated. What’s the difference between Deep Green, A+ Deep Green, and Alpha Green? “Most of our customers know what they are in the mood for, but also appreciate some guidance, so we talk to people a lot.” Ben explained, and then added with a laugh, “Sometimes I feel like I talk too much.”

For example, if you’re in the mood to try a green juice, but are intimidated by the taste of a juice made from kale, celery, sprouts, and other hearty greens, then a great introduction is the A+ Deep Green, which throws a bit of apple in to sweeten things up. Want the most intensely healthy of the green juices? Go with Dark Green or Liver Green.

The point of Juice Shop, as Charlie and Ben explain it, is to get people to think twice about their morning muffin, and consider replacing it with a healthier alternative. “When you start your day with a green juice, then you end up making your health a bigger priority,” Charlie told me. “It’s a stepping stone to a healthier lifestyle.”


They open at 7 am during the week, precisely to accommodate the breakfast crowd. Ben typically handles the morning shift, and says that so far it’s been common for folks in business attire to double-park out front, grab their juice, and head in to the office. During the day, it’s a more conversational crowd of folks who linger and ask questions, which Charlie and Ben eagerly answer.

Besides the healthiness and crisp taste of the juices, Juice Shops also packs a lot of charm into such a tiny spot. The juice comes in glass bottles, with a $2 bottle deposit, so when you return the bottle, you get your $2 back. The décor of the shop is the handiwork of some of the Outer Sunset’s most recognizable artists. The stunning door was made by Luke Bartels of Woodshop SF, and the logo that hangs over the street was engineered by Jeff Canham, also of Woodshop. Inside the shop, the shelving that surrounds the fridge was all done by Jay Nelson, whose wooden vehicles you can see at places like Mollusk Surf Shop and Voyager.

Juice Shop is located at 1994 Union Street (at the corner of Buchanan) and is open 7-7 on weekdays, and 9-7 on weekends. They close on Tuesdays, but Charlie told me that once they’ve settled into the new shop a bit more, they plan to stay open 7 days a week.