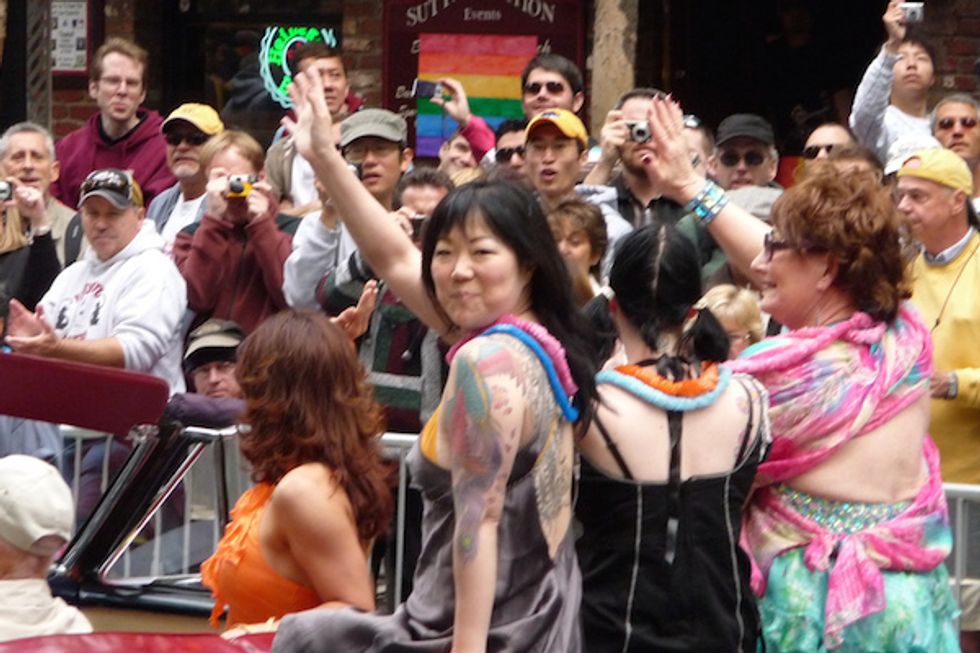 When former mayor Gavin Newsom began marrying LGBT couples at City Hall back in 2004, he ignited the American movement for marriage equality. Today, the U.S. Supreme Court validated the right for all couples, across the nation, to marry the one they love. 7x7 caught up with San Francisco's leaders in the gay community to reflect on this momentous day for civil rights.

If you ever argued in favor of marriage equality, tried to fight the homophobic bans keeping LGBT families from REALLY becoming families, donated to LGBT causes, participated in a rally for gay marriage, attended a Gay Pride march - today, victory is yours. Thanks for winning this - for me, and you. For all of us.

Thirty years ago this summer I came out. I was a 19 year old college kid who fell in love with another boy. I couldn’t tell my family, my roommate, or many of my friends. AIDS was killing young men like me. The idea of legal marriage between two men or two women was nearly unthinkable in that homophobic environment. This morning we’re celebrating because men in love with men and women in love with women insisted that their relationships were the same as heterosexual ones. I love my brave community, which stood up for itself when no one else would. We fought for our dignity. We acted up. We marched and shouted and created political strategies and community networks. We told our families and friends who we were whether they wanted to hear it or not. Marriage equality is the law of the land because LGBTQ people demanded it. Today I offer my thanks to five Supreme Court judges and the lawyers who fought on our behalf, but most of all I say all praise to the army of lovers who made it happen. The victory is ours.

Wow. Today America walks the talk “Equal Justice Under Law.” Today millions of families are more secure and validated. Today our freedom to marry the person we love has been embraced. Today in every corner of this nation, every lesbian, gay, bisexual and transgender person can take a deep breath and walk a little taller. Now our charge is to harness this moment and assure that the embrace of justice is felt by everyone in our community. We know LGBT people live in every community so as long as racism blooms and economic inequality festers, our people suffer. But today we have the scaffolding to build a new America for every LGBT person and beyond. This is a once in a movement chance to alter the future of every successive generation. Let’s do this!!

I first spoke with a boy about marriage some 28 years ago. At the time it was just a thought - not even a dream. And though our lives changed course - my heart was always his. He passed away this week 23 years ago - just a few days before the Pride celebrations. So with this momentous decision it is John I want to thank. Because there are so many people to thank. So many I never met. That have fought for the right to love. That didn't get to see this day. Thank you.

Love is the most delicious ingredient in life. And now every American can taste its sweet nectar.

It is truly a day long fought for, long awaited, and long overdue! I celebrate with all my LGBTQ brothers and sisters this momentous decision by the highest Court in the land. Let us not forget, however, that the decision was 5-4; one more judge with a changed mind would have doomed the whole premise of federally protected marriage rights between same gender couples. As I read the dissenting opinion, I am reminded that a significant portion of the country's population remains opposed, not just to our marriages, but to our lifestyles, our activism, and our very existence. The day-to-day battles continue. We must demonstrate that diversity in America is part of its strength, that there are many versions of family, and that love between 2 individuals should be not just tolerated, but celebrated and afforded all equal rights. Today, let us celebrate; tomorrow, back to the work of changing hearts and minds.

Waking up to the sounds of news helicopters hovering above City Hall, I grabbed my phone to see what was up. "Love wins," read several Facebook updates. "Can't stop crying with joy," gushed one tweet. I was delighted to read that the Supreme Court recognized marriage equality in all 50 states. Fabulous. But I also can't stop thinking that we have a long way to go. Just last week nine people, including a pastor, were shot and killed in South Carolina because they were black. And reports of unarmed black men being killed by the police have become commonplace. While, yes, today is an exciting today for some, the United States still has miles and miles to go when it comes to equality.

Wow. I opened my eyes to all the alerts on my phone…crazy terrorist attacks, then the news! I just started to weep with joy, and still am. Then this sentence came to mind: In the eyes of love we are equal. Today SCOTUS made it the truth! Love Wins! I still can’t believe it!! I have one huge rainbow heart thumping today!!! I wish [my partner] Isabelle was around!

Love wins! More than a right to marry, gay people now have, I now have, equal dignity in the eyes of the law. Today, I AM EQUAL, which is nothing short of extraordinary. And while it should have always been this way, I am humbled by the speed with which in my lifetime, this change happened. We live in an incredible time where change can be so fast and we all contribute to it. I am so grateful for that and to live and be part of the Bay Area where we are at the forefront of driving change in so many ways. The innovation here is all connected to our collective rapid progress.

Jesus, in the words of Popeye the Sailorman, “well, blow me down.” the world as it is now on this issue is galaxies away from the one i grew up in. sure, this decision makes me elated for the folks who want to go out there and put a ring on it, but also, it represents this notion that there is justice and that equal protection under the law is a fundamental concept that can light the way forward on all kinds of issues. thanks to those five judges, the supreme court rose to the occasion and justified its name. now if you’ll excuse me, i have some champagne on my agenda.

Martin Luther King Jr. said, “The arc of the moral universe is long, but it bends towards justice.” Our right to marry is a perfect example of the arc. Our right also creates a firmer ground under the feet of younger people who are making decisions about who they are, and the life that they want to live. And that's what our country is about. Life, liberty and the pursuit of happiness. We won. All of us. Gay. Straight. Young. Old. Every. One. Of. Us.

I'm glad the country now knows what we've always known about ourselves: Our love is real and we deserve the dignity afforded to all marriages. The end.

For us this journey began on the steps of San Francisco City Hall, when we showed up for a marriage equality rally on February 12, 2004 and learned that Mayor Gavin Newsom had just opened City Hall's doors for all loving couples to be able marry. We didn't hesitate a moment and dashed inside and got married. For the first time in our lives, we experienced our government treating us as equal human beings as LGBT people. We committed to do everything in our power to make that sense of human dignity available to every LGBT person.  We dreamed of and worked for the last 11 years for the day that LGBT people would have the dignity to be able to marry everywhere in our nation. Today that dream came true.  We were on the steps of San Francisco City Hall again this morning -- this time not to rally or to protest but to celebrate full nationwide marriage equality.  We will continue to work with all of our friends and community until all LGBT people have full dignity and equality in all aspects of our lives. This movement is about our common humanity, and we believe the momentum from this decision will be unstoppable as we continue to work for social justice for all people.