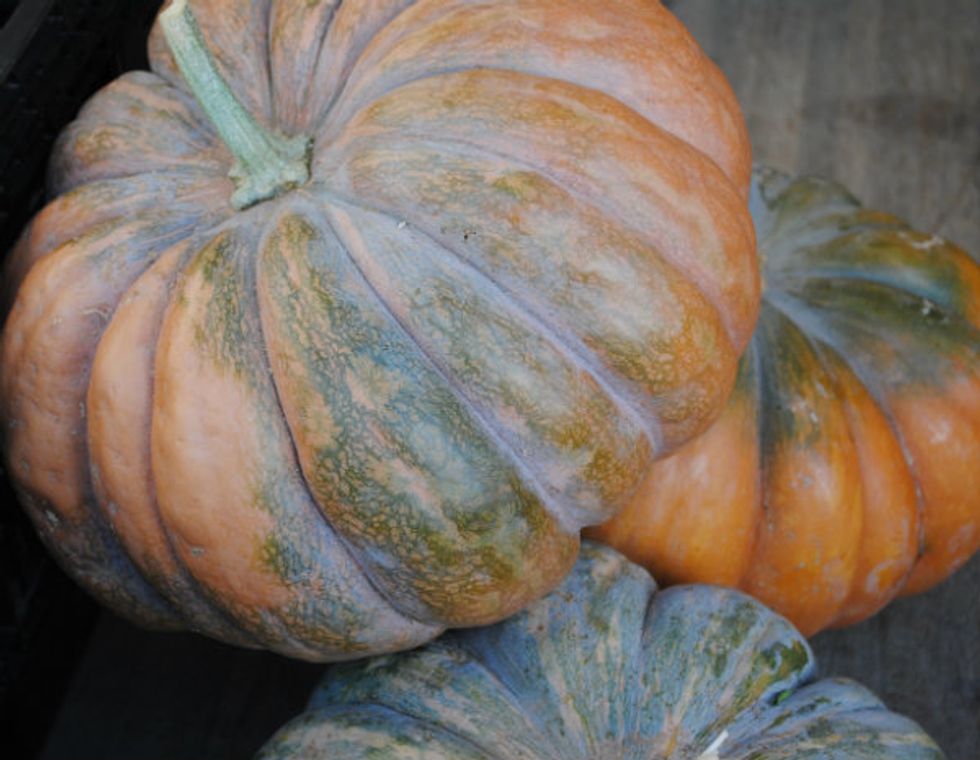 Market Watch: Five Items Not To Miss in October

Autumn officially began almost two weeks ago, but October brings the true seasonal shift at the Ferry Plaza Farmers Market. We may be saying goodbye to plums, basil and eggplant, but we’re also welcoming back pumpkins, Brussels sprouts and early citrus varieties. Here are some fall treats you won’t want to miss this month at the market:

Musquee de Provence squash: A beautiful French heirloom variety, the Musquee de Provence can turn even a staunch squash hater into a squash lover. It has a dense, deep orange flesh and firm texture that holds up well to roasting, with a flavor that is less cloyingly sweet and more distinctively savory than most winter squash, lending itself to a variety of preparations. Find the Musquee de Provence now at the Allstar Organics’ stand at the Saturday market.

Caramel apple gelato: Cremeux ex Machina’s stand at the Saturday market is a treasure trove of seasonal flavor. For their latest creation they’ve paired rich Recchiuti caramel with apples from Devoto Gardens. The result is reminiscent of apple pie à la mode, minus the crust, and it is only available this month at Cremeux’s Saturday market stand.

Bitter melon: Though it may look like a bumpy cucumber, the bitter melon, which closely resembles zucchini in texture, is known for the distinctly bitter flavor from which it garners its name and reputation as an acquired taste. The bitterness can be mellowed by blanching or salting, and it adds a nice tartness to stir-fries and curries. Find bitter melon now through the end of the month at the Chue’s Farm at our Tuesday and Saturday markets.

Rome Beauty apples: It’s officially fall for me when the first Rome Beauties make an appearance at the Flatland Flower Farm stand on Saturdays. This crisp, deep red apple has a subtle spice, making it great for snacking. These beauties are also fantastic for baking, as cooking only enhances their natural spiced flavor.

Marigolds: Marigolds typically appear in early fall at the Ferry Plaza Farmers Market. Also known as Flor del Muerto, or “Flower of the Dead,” they are used in Day of the Dead altars to attract the souls of loved ones who have passed on. With their stunning spray of yellow, orange and bronze colored flowers, marigolds are the perfect way to brighten up a room. Find them at Thomas Farm at the Thursday and Saturday markets throughout October.