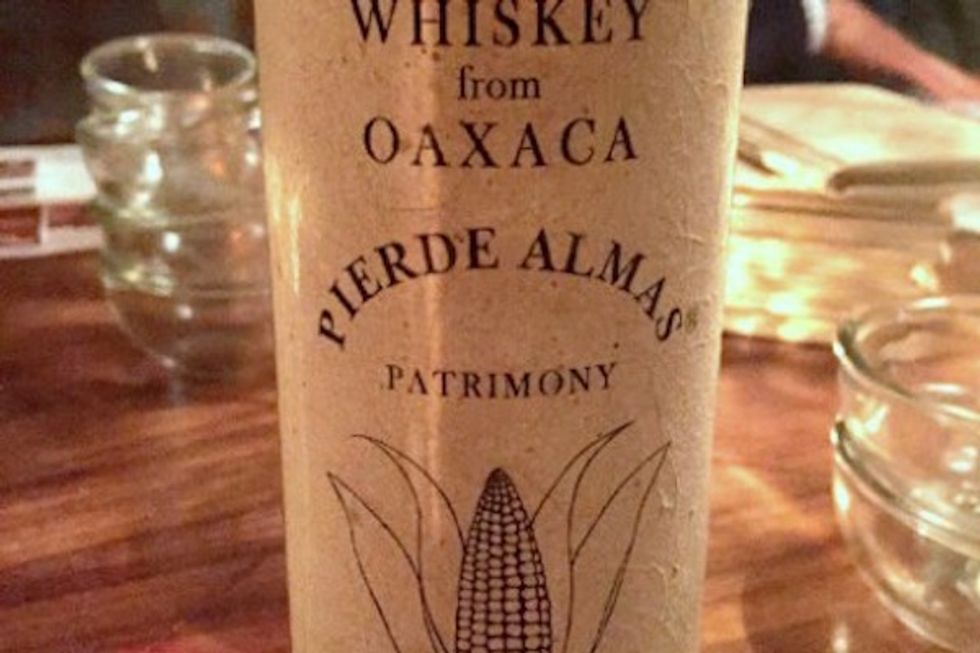 One of Mexico's most beloved mezcal brands is branching away from their flagship spirit to produce a form of whiskey made from Oaxacan corn. After years of experimentation, the magical elixir is finally coming to San Francisco.

Oaxacan mezcal producer Pierde Almas has made making mezcal since 2009 using traditional methods and carefully sourced materials. In fact, their mezcal is so highly-regarded that it is the official drink of choice at high-level state dinners in Mexico. Every bottle is a labor of love: They mill their agave with massive stone wheel drawn by horses; They only use fallen timber to bake the agave in earthen ovens; and they have a program that plants agave in the wilderness so the slow-maturing plant can be harvested by future generations. Even their labels are hand-printed and made with agave fibers that are a byproduct of their mezcal production. So, when Pierde Almas decided to start producing whiskey, it was no surprise that the company looked to the ancient, local corn culture.

Oaxaca is home to 35 of Mexico's 60 different corn varieties and corn has been growing there for more than 6,500 years. It's also homebase to Pierde Almas founders Jonathan Barbieri and Yira Vallejo. "The preservation of ancestral corn’s broad genetic spectrum is more than just a culinary issue," said Barbieri. "It’s an anthropological and ecological imperative."

Barbieri explored seed exchanges in rural Oaxaca to find corn grown by campesenos—peasant farmers that work their own plots of land. “Most of these villages are on such steep slopes that oxen or tractors aren’t feasible,” explained Barbieri. “So they’re climbing up hills with a hand hoe and digging holes to plant seeds. It’s so labor intensive that they only plant for the family. And a family with corn is a family with stability.” By investing in corn whiskey, Barbieri wanted to make sure he was also investing in a sustainable local economy.

And that's where Barbieri’s whiskey production dovetails with his personal philosophy. “Right now, I’m paying roughly double the market price per kilo. If I can get them to grow more than they need, eventually there will be a market for this beyond subsistence for the family and chickens.”

After experimenting with different types of mash and corn bought from local farmers, Pierde Almas produced it’s first 4,000-bottle run of whiskey just last year. Made in small copper pot stills, the profile is earthy with hints of young corn and Bay Area cocktail connoisseurs can't wait to introduce it on their menus.

At a recent tasting hosted at Bergerac, bartenders stirred the new whiskey into old fashioneds, and mixed it with beet juice, simple syrup, and basil for a rich drink that complimented the earthy flavor of the whiskey. Meanwhile, at Calavera, barbacks serve the elusive liquid straight up in earthen shot glasses handmade in Oaxaca. Either way, the ancestral whiskey is sure to catch on quick with local drinkers who want a great tasting liquor with an equally-as-good story.
Want to try it for yourself? Here's where to find Pierde Almas in the Bay Area: