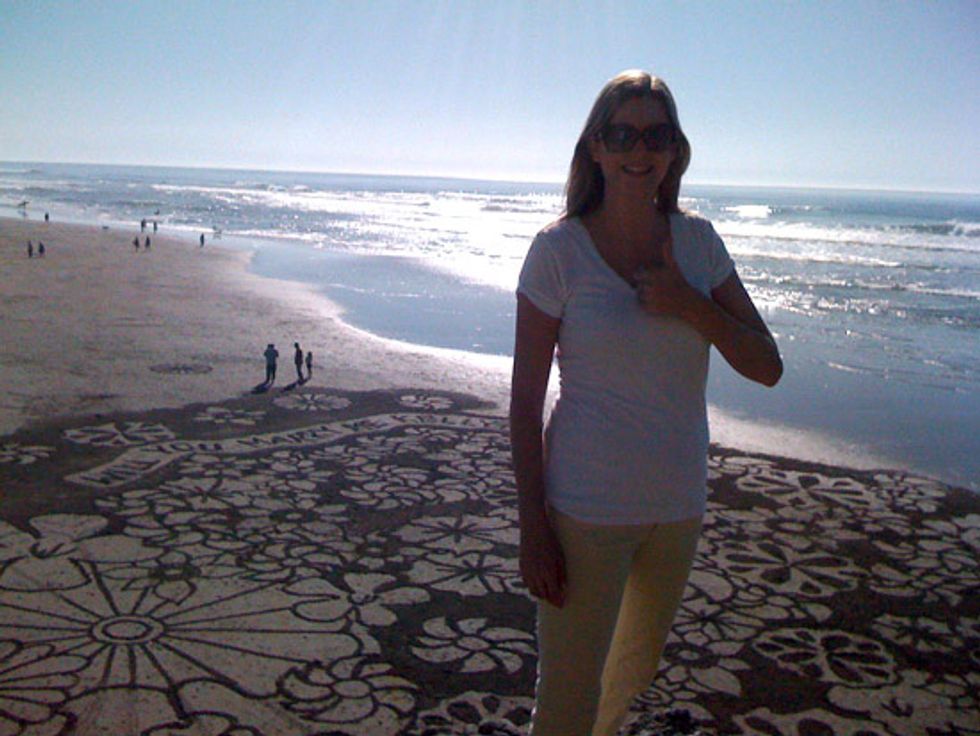 Before we delve into the deets behind the mystery proposal that captivated our readers, let’s get a couple of things out of the way: (1) Her name is Kelly Riplinger and she said “yes” and (2) Jason Fordley, the mastermind behind the sand art question, might well be the most romantic man in San Francisco.

On Wednesday at approximately 3 p.m. I posted a blog featuring photos of what appeared to be an elaborate wedding proposal writ in sand, hoping we might be able to locate the couple and find out what happened. The reaction was swift: Within an hour readers identified the pattern’s artist as Andres Amador; by 10 p.m. I had an email from a friend of the couple saying he was contacting them; and the next morning there was a message in my inbox from Jason’s (admittedly) proud mama ratting him out and providing his email (thank you, Laurie Rickson). In between there were a few doubters (someone commented that there was no way it was real) and several women who offered via email or Facebook to take the mystery man up on his offer if Kelly rejected him.

Ladies, you are out of luck. As Kelly told me via phone late yesterday: “He’s taken, sorry!”

Here’s how it all went down: Several years ago, Jason and Kelly were enjoying a picnic of Thai take-out on Ocean Beach when they noticed Amador creating a mural in the sand. “It was one of our first dates in San Francisco and it was just so cool,” says Kelly. “We took a bunch of photos and it was a great memory.”

Three years later, Jason tracked down the artist via the Internet and asked him to create a wedding proposal sand mural on February 12 (and not this past weekend as previously reported—my bad). The artist conceptualized the design and directed a handful of the couple’s friends in raking it into Ocean Beach. It took them, according to Amador, about an hour and a half to get the job done; then everyone took cover on the sidewalk above the rocks.
Meanwhile, Jason was luring Kelly back to the picnic spot. “As we walked down the beach, we talked about the mural we’d seen years ago,” Kelly says. “When we came upon the patterns in the sand, I couldn’t believe the artist was back!”

Because the design was so large, Kelly couldn’t read the message until she climbed up on the rocks (which took some coaxing). The waves were just starting to erase the edges of the mural when Jason pointed out the words and got on his knee. “I was in total shock,” says Kelly. “I mean, after five years I was getting a bit impatient, but I had no idea he would do anything like that! He told me that he’d made me wait so long, he knew he had to make it really good.”

And, as I said at the beginning, she said “yes.” Jason slipped the ring he’d designed on her finger, their friends (and the small band of onlookers) cheered and the champagne started flowing by a fire pit on the beach.

But the surprises weren’t over. Jason chartered a limo to take the whole crew around the city to scenic spots (such as Crissy Field and Twin Peaks) before crossing the Golden Gate Bridge for an In-N-Out Burger feast. After that, they came back to Ocean Beach for a bonfire. “There happened to be fire dancers there that night,” says Kelly. “It was the ONLY thing he didn’t plan.”

I asked Kelly what women around San Francisco want to know: Is the guy this romantic all the time? “He really is,” she says. “He’s just stupid creative. I don’t know how I got this lucky. He made a huge effort, and it was the happiest day of my life.”

The wedding is set for next fall in the Wine Country.