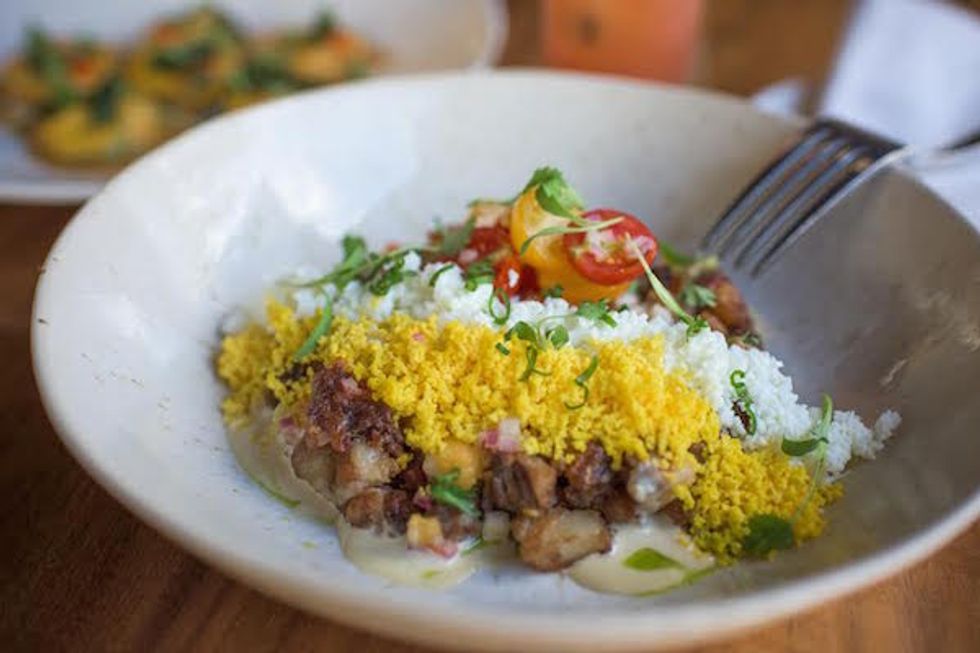 By
Anthony Rogers
Leaving Sausalito's acclaimed Sushi Ran for San Francisco's struggling 1760 was the best decision Chef Carl Foronda ever made. Well, it was the best decision for 1760, anyway, which is having a revival thanks to Foronda's global flavors. And we're not compaining...have you tried the pork sisig yet?
Having grown up in the kitchen with his mother and grandmother cooking the classic Filipino dish, Foronda has reached back into his upbringing for traces of those Southeast Asian flavors. The pork sisig, a succulent brunch option, adds a hearty shot of flavor to the Polk Street restaurant's menu. Go forth and make it—mornings at home will never be the same.

To prepare the pork:

To prepare the ginger aioli:

To prepare the cilantro oil:

To prepare the sieved egg

To prepare the garnish:

2. Heat oil in a large pot over a medium-high heat until hot. Add pork pieces and cook, turning occasionally until nicely browned on all side, allow for two minutes on each side. You can adjust the heat to make sure meat does not burn. Remove pork from the hot when golden, drain, and set aside.

3. Add garlic, onion, carrot, bayleaf, and saute until translucent. Add tomatoes at your leisure, chile, vinegar, and fish sauce. Scrape the bottom with a wooden spoon and return set aside pork back into the pot.

4. Cover pork with water about half an inch and bring the liquid to a simmer. Cover the pot loosely with aluminum foil and place in the oven to braise for 2 hours or until the pork is tender.

5. Remove pot from the oven and let the pork cool to room temp. Remove the liquid and chop the pork into small dices and set it aside once done,

6. Heat frying pan over medium-high heat until almost smoking. Add diced pork and brown every side, stirring occasionally, for about 6 minutes total. Once browned, set onto a paper napkin and let it drain.

1. Place mayonnaise in a large bowl and gradually whish in the other ingrediants.

1. Bring a pot of water to a boil. Begin adding blanch herbs, bunching the stems and immersing the leaves into the boiling water for 20 seconds. Then immerse the leaves into the ice bath. Squeeze the excess liquid out of the bunches and roughly chop them up. Sprinkle the herbs into a blender, adding oils (of your choice) and blending it well for about a minute to a minute and a half. Once blended, stain and reserve the oil for later. You can discard the solids.

1. Place eggs in the pot and cover them with water. Bring the pot to a boil and simmer for 6 minutes. Remove the pot from the heat and let the eegs stand for 5 minutes. Remove most of the water from the pot and add ice to cool eggs. Once cooled, peel and seperate whites from their yolks. Push the whites through the sieve or hand strainer and reserve them for later. Repeat with yolks as well.

1. Heat frying pan with oil until hot. You will want to heat the pork through untilsizzling hot and strain. Place pork in a bowl and mix well with calamansi or lemon juice with fish sauce. Season the dish with salt to add taste. Add in the mixed sisig to the bowl or platter and add the finishing garnish.