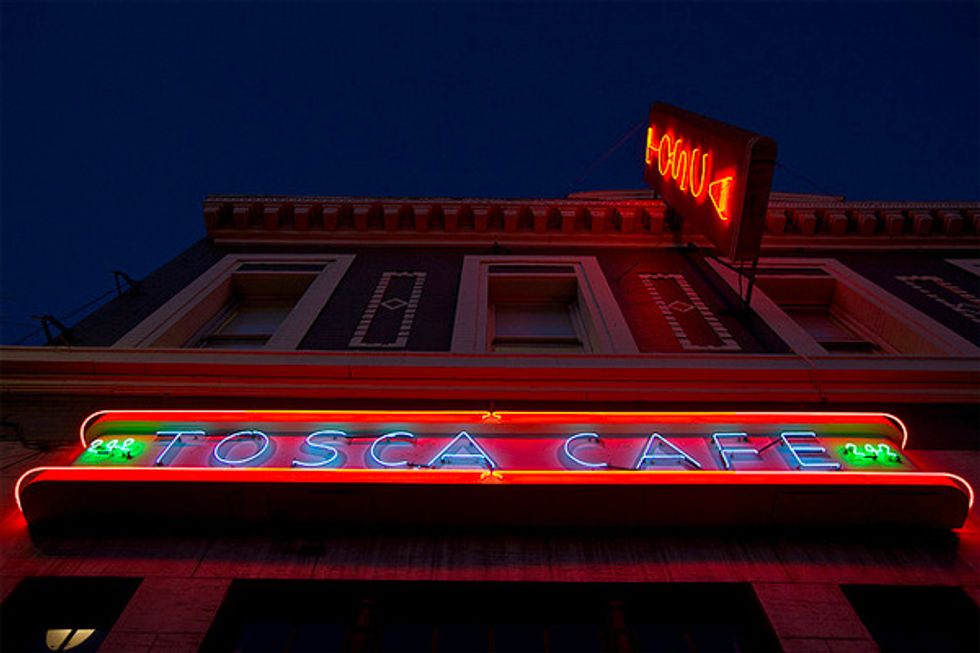 Ah, fall. It's around the corner, and it's traditionally a time of year when lots of restaurants try to rush to open before the holidays. This year there are a handful of higher-profile openings that you should keep an eye out for.

Tosca Cafe: First up, the big'un is the revamp of Tosca Cafe in North Beach. It's getting a "respectful" remodel at the hands of New York restaurateur Ken Friedman, and it will newly have a food menu from chef April Bloomfield (The Spotted Pig, The Breslin) that will be Italian focused, but will likely be pretty interesting and talked about for the months to come. Also new to the space will be a nice cocktail program, which is being created by Isaac Shumway, formerly of Heaven's Dog and Bourbon & Branch. (Shumway is currently working to revamp things like the famed House Cappuccino, which is basically a hot chocolate with brandy.) And there will be an unusual, Italo-centric wine program created by local legend Randall Grahm of Bonny Doon fame, and Biondivino wine store owner Ceri Smith, both of whom are passionate wine folks and both will be on the floor at the restaurant. Look for this place to (re)open, by all accounts, by early October, but no exact date has been set.

The Third Rail is the new Dogpatch project from the owner of Range, Phil West, and his longtime bar guy Jeff Lyon. Lyon's always had a talent for creating California-style, culinary cocktails with lots of farmers market seasonality, and we expect some of the same at the new spot. Also there will be a jerky bar (!), and likely some other snacks as well. They're aiming for a mid-November opening. 628 20th Street

TBD is the new next-door project from the AQ team of chef Mark Liberman and owner Matt Semmelhack. They're focusing on wood-grilled meats and woodfire in general, and so the aesthetic is going to be mid-century camping chic, with red lanterns, taxidermy, plaid thermoses and the like. Sure the name is a bit of a cop out — like a band that's called Insert Band Name Here — but it's also a play on AQ, which means "as quoted," and makes some sense in context. In any event, the food and cocktails should be good! Expect more approachable, casual fare and service than at AQ, with a hearth and grill right in the center of the space. Exact opening date is, of course, TBD, but hopefully by November. 1077 Mission Street

4505 Meats Divisadero: Continuing the ongoing Valencia-fication of Divis, right across from the brand new La Urbana, will be this new offshoot of Ryan Farr's butchery and meat cookery operation. The newest 4505 Meats, due hopefully by the holidays, is coming to the former Da'Pitt BBQ space (also formerly Brother-in-Laws) at Divisadero and Grove, and will boast a barbecue menu on top of 4505 favorites like bacon-studded hot dogs and burgers.

Cafe Terminus: Chef Dennis Leary (Canteen, The Sentinel) is bringing more food to the folks of the FiDi this fall with this new spot, at the cable car terminus at California and Drumm. Cafe Terminus will have a cozy, European feel from the sound of it, with takeout sandwiches all day and an evening food program too, along with cocktails. As of last winter, Leary was aiming for a fall opening, and our fingers are crossed. This project joins Leary's other new venture, up in the Tenderloin: Trocadero Club in the former RJ's at the corner of Geary and Leavenworth, also opening soonish.

Whiteside Company: The likely-to-be-awesome downtown spinoff of Bar Agricole at the newly restored 140 New Montgomery is due for a fall opening, but it's been many months since our last update. The concept is cocktail-focused, with food all day long, and there will be an outdoor patio space, albeit down in the canyon between tall buildings there. SF Mag talked to owner/bar guy Thad Vogler a while back and offered up this draft menu–however since then, Agricole chef Brandon Jew has moved on to work on his own project, so it's unclear how much has changed. We'll update this post as soon as we know more.

Also be on the lookout for the near-term opening of Beaux in the Castro, the newest bar/lounge from the team behind Q Bar, The Edge, and Midnight Sun in the former Trigger space, which should inject some much needed classy lounge energy to the Upper Castro environs; also keep your eyes peeled for the possible late fall opening of Corey Lee's new, unnamed (more casual) spinoff of Benu, in Hayes Valley on Gough, which might not make it open until winter, or after. (Thus this is a list of seven, and not eight.)