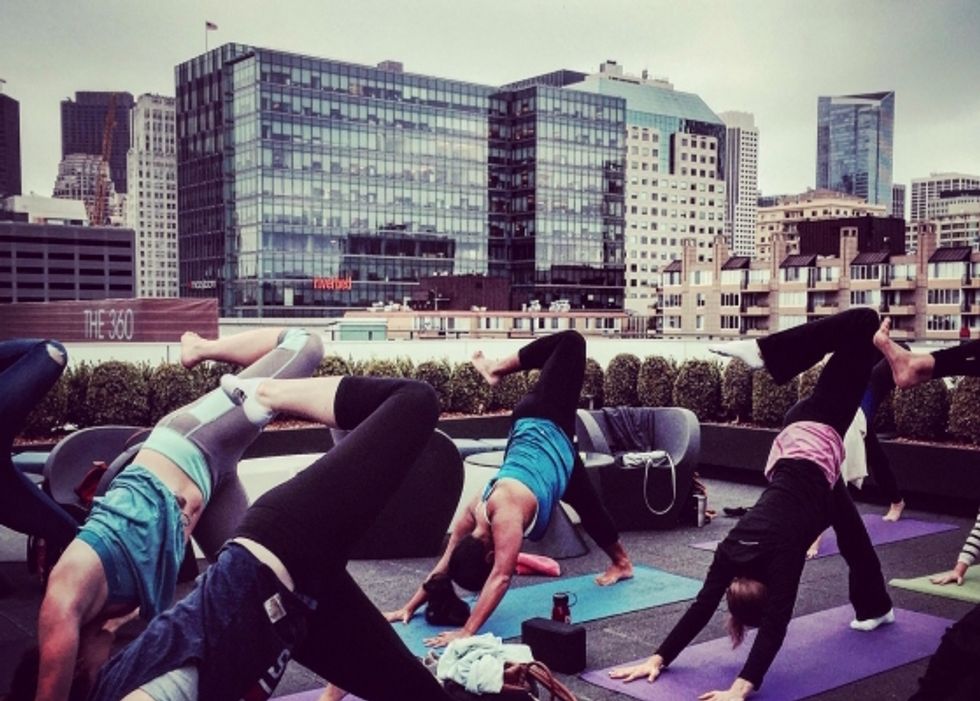 Thanks to Daylight Savings, there's no excuse not to sneak in some exercise after work. Relish your savasana, tone your muscles, and find inner peace beneath the San Francisco skyline with Rooftop Yoga from Cardio-Tone.

El Niño permitting, established yogi Peter Walters has been teaching his popular rooftop yoga class since June 2015, touting the healing powers of fresh air and SF views as the cherry on top of your workout.

“Most of us spend a lot of the day indoors on our computers typing away," Walters says. "Class on the rooftop is a great way to get outside, move, sweat, and if we're lucky, watch a beautiful sunset overlooking SoMa. It's really a dream come true.”

The first we noticed in Peter's class was the chill community vibe as we met in Cardio-Tone's 3rd Street lobby on Monday night. On the roof, we assembled our mats facing the iconic SF skyline while deciding, at Peter's request, how “spicy” we wanted class to be—general consensus: somewhere around jalapeño/sriracha.

Despite the evening chill, we warmed up quickly as the class launched into a vinyasa flow after setting our intentions with three Oms. Peter consistently played up the outdoor component, directing us to look to the sky and enjoy the clouds where a boring ceiling would otherwise have been. The humming traffic and a diverse Spotify playlist (everything from Phil Collins to Bob Marley) provided an energetic soundtrack—a very nice departure from the often too-controlled and sterile environments of your typical yoga class.

“My classes tend to be a bit more athletic outside so we can build up more heat and sweat,” Peter explains. And true to his word, he challenged us with a repertoire of poses, including what felt like dozens of thigh-burning chairs. The hard work paid off with a welcome release at the end—never underestimate the power of yelling from the rooftop at the top of your lungs. Time your class just right and you could have the most interesting seat at the Giants game this season.