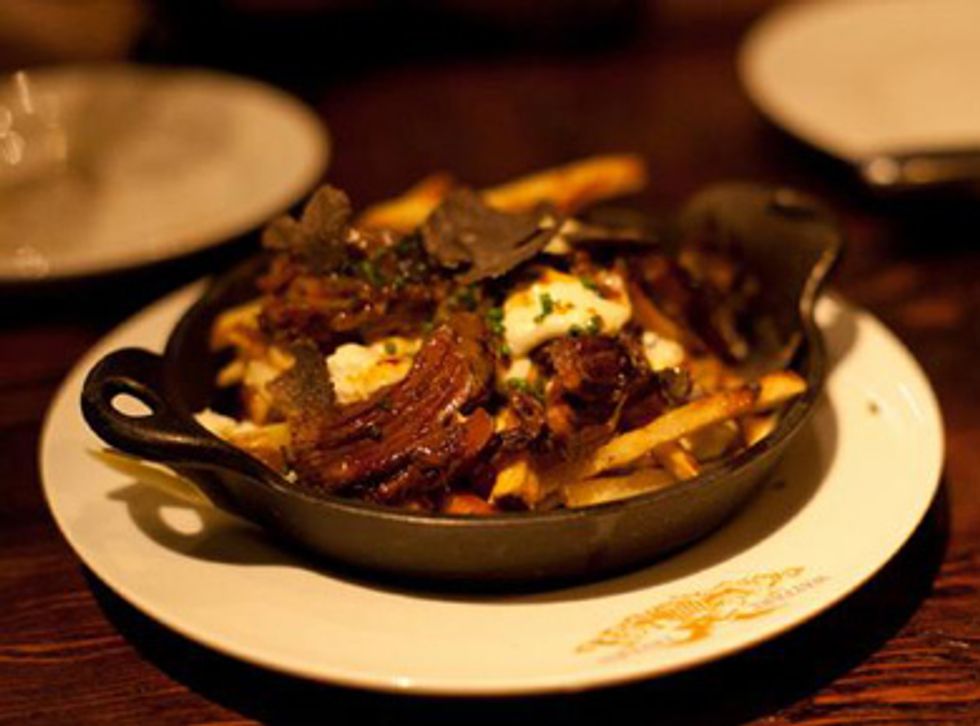 The Posh Poutine of San Francisco

Two things you may not know about Salt House co-owner Doug Washington: 1) He's Canadian 2) He hates poutine. That's precisely why it's been a menu staple at his restaurant since it opened five years ago. His partner, executive chef Mitch Rosenthal thought it would be a funny joke to put poutine on the opening menu at Salt House. It's not too much of a surprise that the Quebecan comfort food—an unmistakable combination of French fries, cheese and gravy—caught on. "It's fat on fat on fat," says Rosenthal. "People love it."

Although the original poutine is a rather humble Canadian dish made with bland cheese curds and gravy, Rosenthal gussies up thick-cut Kennebec French fries with Béchamel sauce, fontina cheese and a short rib gravy that takes about a day to make. The dish comes to the table at Salt House in a little crock pot and servers pour the gravy on it tableside. Rosenthal thinks of it as a great dish to share as a starter, but he's amazed that groups of men will come in for lunch and order one each as an entree.

Chef Chris Beerman also has fun with the original recipe at his restaurant Citizen's Band in SoMa.  He does what he calls a "diner take" on the dish with house-cut, medium size Kennebec fries, braised bacon and coffee gravy and Tillamook cheddar. "This dish reminds me of the chili cheese fries I ate as a kid," says Beerman.

Finally, chef Adam Carpenter has a version with buffalo mozzarella curds, hot brown gravy and caramelized shitake mushrooms on the late night menu at Jasper's Corner Tap, and there'san off-menu poutine made with lamb chili. "While we like some fun flavors, I prefer to keep it simple and just make small twists." says Carpenter.

We've heard about variations on the theme at Saucein Hayes Valley, and The Liberties in the Mission. One thing's clear, poutine is not easy to come by in San Francisco. If you know of another one we missed, please do feel free to share in the comments.